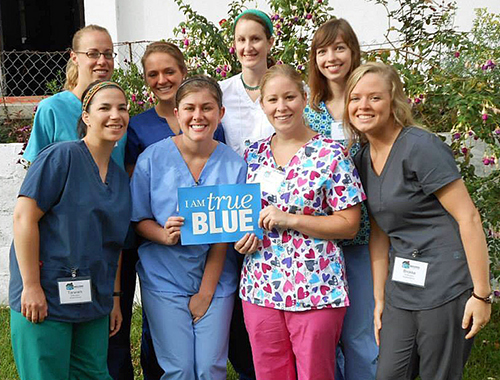 The consul-general of Japan highlights a dynamic celebration of International Education Week at MTSU, set Nov. 10-14.

Motohiko Kato, Japan’s consul-general stationed in Nashville, will present “Japan in the World: Challenges and Opportunities in Japan’s Efforts to Increase Global Peace and Prosperity” at 4 p.m. Wednesday, Nov. 12, in the Parliamentary Room of the Student Union.

You can see a larger version of this flier by clicking on it.

Kato, whose diplomatic career began in 1982, was deputy chief of mission at the Japanese Embassy in Afghanistan from 2004 to 2007. He worked closely with his American counterparts there on various reconstruction efforts.

The Consulate-General of Japan at Nashville covers Tennessee, Kentucky, Arkansas, Louisiana and Mississippi.

Kato is responsible for protecting the interests of Japanese companies, promoting Japanese culture and caring for Japanese citizens in the five states.

MTSU student nurses who raised money for an education abroad program to Central America will be celebrated in “Medicine for Guatemala,” a documentary to be shown at 4 p.m. Tuesday, Nov. 11, in the Keathley University Center Theater.

Dr. Ric Morris of the Department of Foreign Languages and Literatures, who accompanied the nurses on their summer 2014 education-abroad experience, produced the documentary.

The Office of International Affairs and the Intercultural and Diversity Affairs Center will present “This is Me” at 7 p.m. Tuesday in the KUC Theater.

This event will feature MTSU students telling how they stretched their comfort zones to achieve and succeed in different cultures.

MTSU student nurses, the subject of the documentary “Medicine for Guatemala,” pose for a photo during their summer 2014 education-abroad experience. In the front row are, from left, Tara Ghodrat, Katie Mullen, Danielle Bowland and Brooke Bilbrey. In the back row are Hannah Owensby, Olivia Lovell, Sarah Wilkerson and Lauren Stamps. (photo submitted)

Eleven students from the College of Mass Communication will screen the documentaries they created during a study-abroad trip to France at 4 p.m. Thursday in the Student Union Theater.

The students, led by instructor Tom Neff, created stories about artists who live and work in Paris.

“The documentaries are amazing and demonstrate the true impact of education abroad and the caliber of our students,” Schmidt said.

Chinese culture will be front and center when the Confucius Institute at MTSU presents a Chinese music performance at 2:30 p.m. Thursday, Nov. 13, in the James E. Walker Library lobby.

Members of the institute also will prepare and serve a traditional Chinese meal at 6:30 p.m. Thursday in the Raiders for Christ building, located at 1105 East Bell St. in Murfreesboro.

All events are free and open to the public.