The reception at Rock’N Fish Restaurant, which also welcomed Nashville Mayor Megan Barry, was held just before the Grammys telecast. It marked the third year the university has partnered with the Nashville-based organization. 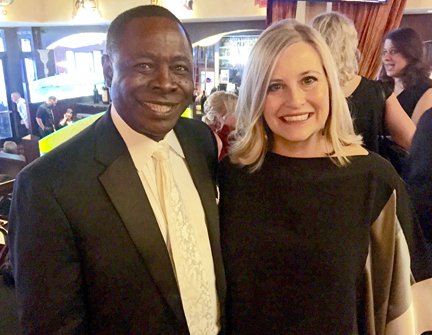 MTSU President Sidney A. McPhee and Nashville Mayor Megan Barry are shown here at the Leadership Music reception in Los Angeles before the Feb. 15 telecast of the 58th annual Grammy Awards. (MTSU photo by Andrew Oppmann)

It also capped three days of activities in the Los Angeles area by MTSU’s College of Media and Entertainment to underscore the national profile of its recording industry program.

“MTSU’s increasing presence at the Grammys has been noticed and appreciated, not only by our alumni but others in the recording industry,” said President Sidney A. McPhee. “We’ve planted the True Blue flag in a very visible location.”

McPhee, along with Media and Entertainment Dean Ken Paulson and Beverly Keel, chair of the Department of Recording Industry, greeted Leadership Music alumni at Monday’s event, some of who were also former MTSU students.

The annual program brings together established leaders within the music community to discuss issues currently affecting the industry.

“Our partnership with Leadership Music affords opportunities for us to connect with some of Music City’s top influencers,” McPhee said. “This is a perfect way to finish MTSU’s third trip to the Grammys.”

Paulson, a former executive board member for Leadership Music, said the college’s now-annual presence in Southern California sends a strong signal to those working in the music business.

“It’s our ongoing relationship with Leadership Music and other industry professionals that allows us to give our students a vibrant, hands-on education,” Paulson said.

Leadership Music alumni come from all genres of music within both the creative and business segments of the industry, as well as partners from the nonprofit, business, educational and legislative communities.

Its alumni now total about 1,000 and include nearly four dozen current and former heads of record labels, executive directors of the nation’s top music associations and executives from The Recording Academy. Among them is Keel, a graduate, former board member and former secretary of the program.

“It’s also wonderful that President McPhee, along with Ken (Paulson) and Beverly (Keel), have made our event part of MTSU’s annual trip to Southern California.”

As the Leadership Music event was starting to wind down, MTSU alumnus Garry Hood’s day was getting very busy. He again was the head stage manager for the Grammy ceremony.

Hood, a member of the Class of 1977, has served as head stage manager for more than 1,000 hours of network television specials, including Olympic opening and closing ceremonies, presidential inaugurals, the Kennedy Center Honors, Super Bowl halftime shows as well as the most major entertainment awards ceremonies.

“We are so proud of Garry’s continued, excellent leadership work at these important events,” McPhee said.

LOS ANGELES — Middle Tennessee State University honored one of its own, Grammy-winner and 2016 nominee Luke Laird, at a special reception held Sunday, Feb. 14, the day before the music industry’s biggest awards event.

MTSU’s College of Media and Entertainment honors alumnus and 2016 Grammy nominee Luke Laird at a special pre-Grammy event Sunday, Feb. 14, at The Standard in downtown Los Angeles. From left are Ken Paulson, dean of the College of Media and Entertainment; Beverly Keel, chair of the Department of Recording Industry; Laird; alumnus Pete Fisher, general manager of the Grand Ole Opry; MTSU President Sidney A. McPhee; and Erika Wollam Nichols, general manager of The Bluebird Cafe in Nashville. (MTSU photo by Andrew Oppmann)

“This is a really special day for us — and especially poignant for me, personally — because we are here to honor Grammy Award-winning songwriter and producer Luke Laird,” said Keel, who taught Laird as a student in one of her classes.

“He continues to make country music history year after year,” she said. “Indeed, our students, who will take our History of Country Music class in 20 or 30 years, will study Luke’s accomplishments and be inspired by how he shaped country music’s sound for more than a decade.”

Laird, in thanking MTSU for the recognition, talked about the encouragement and support he received from the faculty — starting when he first visited the campus as a prospective student.

“Everyone there was so welcoming, I knew I was going to go to school there,” Laird told the audience. “I dreamed to be a songwriter and they never discouraged me. … The people there encouraged me, still to this day.

“My time at MTSU is a time I look back on very fondly.”

MTSU President Sidney A. McPhee, left, chats with alumnus, Grammy-winner and 2016 Grammy nominee Luke Laird at a reception held Sunday in his honor in Los Angeles by the MTSU College of Media and Entertainment as part of the Grammy weekend festivities in Los Angeles.

Laird is up for the best country song award in the 58th Grammy Awards on Monday, Feb. 15, for “Diamond Rings and Old Barstools,” performed by Tim McGraw, and best country album as producer of Kacey Musgraves’ second release, “Pageant Material.”

He has written 20 Billboard No. 1 hits and was recently named BMI’s Songwriter of the Year and the Academy of Country Music’s songwriter of the year. He won a Grammy in 2014 for producing Musgraves’ debut album, “Same Trailer, Different Park.”

McPhee applauded Laird’s accomplishments and his devotion to his alma mater.

“Luke’s professional success and deep devotion to MTSU makes him a stellar example of the hard work and spirit we strive to instill in all of our students,” McPhee said. “We are proud of him.”

Other Grammy nominees with MTSU ties this year include:

On Monday, the university is among the presenting sponsors of a Leadership Music alumni reunion at a venue less than a mile away from Los Angeles’ Staples Center, the site of the Grammy telecast that evening.

And the setting couldn’t have been more appropriate: the legendary Troubadour nightclub, where Frey met Don Henley for the first time. Bonnie Raitt and Lee Ann Womack were among the artists on the bill for Saturday’s concert.

It marks the second time the Americana Music Association and MTSU have partnered on the days leading up to the music industry’s biggest event. The 58th Annual Grammy Awards will be held Monday, Feb. 15, in Los Angeles.

MTSU and Americana, along with Nissan and Vector Management, also joined forces for an Everly Brothers tribute at the Troubadour in 2014 during MTSU’s first trip to the Grammys.

“There’s no more appropriate place than the Troubadour to celebrate the life and music of Glenn Frey,” said Ken Paulson, dean of MTSU’s College of Media and Entertainment. “And there’s no better place, here in the Los Angeles area, to draw attention of our alumni, friends and supporters to our Recording Industry program.”

Since opening its doors in 1957, the Troubadour has been where some of contemporary music’s biggest moments happened. Elton John made his U.S. debut here, and James Taylor first heard Carole King’s “You’ve Got a Friend,” which he made into his own hit, at the Troubadour.

Paulson, who became dean in 2013, forged a partnership between MTSU and the Americana Music Association, which promotes “American Roots Music” around the world. The association and the college now team up on numerous events.

Before Saturday’s concert, President Sidney A. McPhee, along with Paulson and Beverly Keel, chair of the Department of Recording Industry, met with alumni, supporters and friends of the college.

“We’ve traveled each year, for three years now, because I feel it’s important MTSU demonstrates its support of our alumni in the recording industry and we congratulate Grammy nominees with MTSU ties,” McPhee said.

“Coming to the Troubadour twice for two events with Americana reinforces to me the value of our deep partnership with this unique brand of music.”

Dean Ken Paulson of the College of Media and Entertainment, center, joins President Sidney A. McPhee, right, in welcoming alumni and friends of the university’s recording industry program to a gathering before the Glenn Frey tribute sponsored by the Americana Music Association and MTSU at the legendary Troubadour nightclub in West Hollywood, California.

Grammy nominees with MTSU ties this year include:

On Sunday, MTSU will host an afternoon reception to honor Laird and his continued ties to the university. McPhee will later host an evening dinner with Southern California alumni.

On Monday, the university is among the presenting sponsors of a Leadership Music alumni reunion at a venue less than a mile away from Los Angeles’ Staples Center, the site of the Grammy telecast that evening.

Leadership Music, based out of Nashville, holds an eight-month training program each year for rising industry figures. Founded in 1989, it has more than 900 alumni, including nearly four dozen current and former heads of record labels.