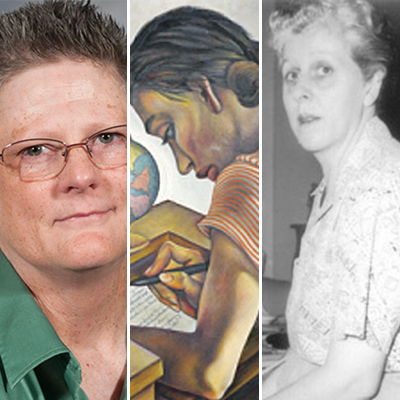 A university history professor will explore the work of an artist who shatters all kinds of existing narratives about women and art at an upcoming MTSU event.

Dr. Jae Turner, a lecturer in the Department of History, will discuss “Mary E. Hutchinson’s Gender Madness” at 3 p.m. Thursday, Feb. 18, in Room 100 of the James Union Building. A printable parking map is available at http://tinyurl.com/MTSUParkingMap.

Mary E. Hutchinson, a native Atlantan who lived from 1906 to 1970, taught in New York in the Federal Art Project under the Works Progress Administration from 1934 to 1943. After she returned to Atlanta in 1945, she taught art at several Catholic high schools.

Artist Mary E. Hutchinson works on a portrait of her friend “Don Sheldon” in this 1950 photo. She exhibited the painting in 1953 at a New York exhibition of Georgia artists sponsored by the National Association of Women Artists, of which Hutchinson had been a member since 1934. (Photo courtesy of www.jaeturner.com)

“Hutchinson and her work are not only lost; they have become unintelligible,” Turner wrote at “The Artworks of Mary E. Hutchinson,” http://meh.omeka.net, the website she established to create a digital catalog of Hutchinson’s work.

“By unintelligible, I mean that her art is now difficult or even impossible to read in meaningful ways. Or the meanings available make no sense when placed in context with her lived experience and her other work.”

Turner writes that her approach to Hutchinson “critiques the structures and limits of art history associated with gender, sexuality and race which have rendered her life and work unintelligible.”

Hutchinson’s work has been exhibited in several galleries and museums, including Atlanta’s High Museum of Art and New York’s Midtown Galleries. Her correspondence, writings, artwork, scrapbooks, photographs and other printed material are housed at Emory University.

Turner’s lecture on Hutchinson is part of the spring 2016 Women’s and Gender Studies Research Lecture Series. Each academic year, these events present a wide range of feminist perspectives from MTSU faculty and students at informal gatherings.

Women’s and Gender Studies Research lectures are free and open to the public. For more information, contact Dr. Clare Bratten at 615-898-2795 or clare.bratten@mtsu.edu.

“The Student,” a 1937 painting by Mary E. Hutchinson, is now in the collection of the Auburn Avenue Research Library in Atlanta. It was first exhibited at the Midtown Galleries in New York. (Photo courtesy of www.jaeturner.com)