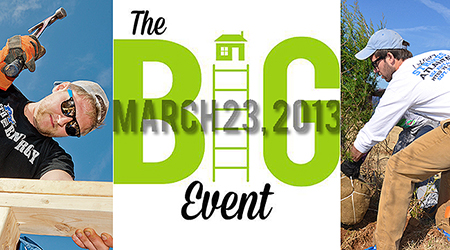 The United Way of Rutherford and Cannon Counties is teaming with MTSU for a massive volunteer effort.

MTSU’s “The BIG Event,” which is slated for Saturday, March 23, will boost the United Way’s endeavors on the final day of the organization’s “Days of Action.”

“The BIG Event is the largest one-day student-run service project in the nation, where students of MTSU will come together to say ‘thank you’ to the residents of Murfreesboro,” said Brandon Brown, philanthropic coordinator of MTSU’s Student Government Association.

The SGA is one of two MTSU partners, along with MT Athletics.

Meagan Flippin, United Way president and an MTSU alumna, said she became aware of the university’s large annual volunteer effort, which previously went under a different name, as a student. This is the fifth year for the MTSU event.

Flippin said the local United Way chapter has staged “Days of Action” for almost a decade.

“It just made sense, because it seemed like we were working toward the same efforts at the same time of year, that we partner together to mass-produce this community-service event and to have everyone kind of on the same page,” said Flippin.

From March 21 to March 23, United Way’s “Days of Action” will promote volunteerism through specific projects in the area.

The United Way deadline to register for this year’s activities was March 1. Job request forms and volunteer forms for MTSU’s “The BIG Event” were due  March 4. Details are available at www.mtsu.edu/sga/bigevent.php.

Last year, more than 500 volunteers participated in the joint effort, racking up 2,301 hours of service and completing 56 projects.

“In the state of Tennessee last year, a volunteer hour was valued at $21.36,” said Flippin. “You can do the math and see the kind of economic impact that has on the community.”

This year’s projects include delivering meals to homebound seniors, building a play area for an after-school program, general painting for a multiservice ministry and organizing donations for a local mission.

One unique opportunity to be offered for the first time this year is “speed volunteering” from 11 a.m. to 1 p.m. Thursday, March 21, and Friday, March 22, according to Kristen Hampton, United Way coordinator of marketing and special events.

“If there’s someone who can’t get out of the office all day, or maybe has a job that’s just not conducive to that, this is an opportunity for individuals to just stop by, volunteer and make an impact,” Hampton said.

The “speed volunteering” locations are at the United Way office at 615 Memorial Blvd., Suite 200, or the Rutherford County Chamber of Commerce at 3050 Medical Center Parkway, both in Murfreesboro.

For more information about “Days of Action,” or to register, contact the United Way at 615-893-7303 or visit www.unitedwayvolunteer.org.