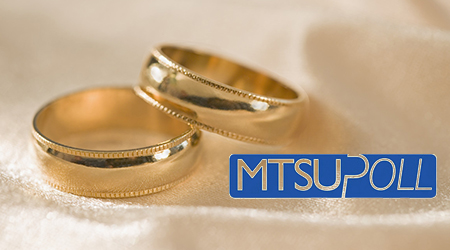 Opposition to gay marriage remains stronger in Tennessee than nearly anywhere else in the country, but the state’s proposed “Don’t Say Gay” law has little support, the latest MTSU Poll indicates.

“Though Tennesseans may be fairly characterized as extremely opposed to same-sex marriage at this point, whether and how homosexuality should be addressed in public schools is a very different matter,” said Dr. Jason Reineke, associate director of the poll at Middle Tennessee State University.

A solid 62 percent majority of Tennesseans oppose “allowing gay and lesbian couples to marry legally,” while 28 percent are in favor, 6 percent don’t know and the rest decline to answer, according to the poll.

Tennessee’s nearly two-thirds opposition to legalizing gay marriage is significantly higher than the 43 percent opposition registered nationally in 2012 surveys by the Pew Center for the People and the Press. (You can read those survey results by clicking the link.)

The poll response number is higher even than the 56 percent opposition Pew found to be typical in 2012 of the South Central region that includes Tennessee as well as Alabama, Arkansas, Kentucky, Louisiana, Mississippi, Oklahoma and Texas.

Somewhat paradoxically, though, a 57 percent majority opposes “a law forbidding any instruction or discussion of homosexuality in eighth grade and lower classes in Tennessee public schools.”

That’s the key provision of the so-called “Don’t Say Gay” bill under consideration by the state Legislature. Only 31 percent support such a law in the MTSU Poll. Eight percent are undecided, and the rest decline to answer.

Only 33 percent of those responding to the MTSU Poll support such a law, while 14 percent are undecided and the rest decline to answer.

Tennesseans opposed to legalizing gay marriage were about evenly divided on parental notification regarding homosexual activity — 40 percent in favor and 39 percent opposed. However, among those in favor of legalizing gay marriage, 73 percent were opposed to parental notification regarding homosexual activity, while only 19 percent were in favor.

“The overall opposition to provisions of the so-called ‘Don’t Say Gay’ bill may be due to different political and religious groups opposing those provisions for different reasons,” said Reineke. “For example, nonevangelicals and Democrats may feel that the bill goes too far in discriminating against homosexuality, while evangelical Christians and Republicans may think that the bill doesn’t go far enough in its opposition to homosexuality or that the bill should require school officials to report not only homosexual but also heterosexual activity among young, unmarried students to parents.”