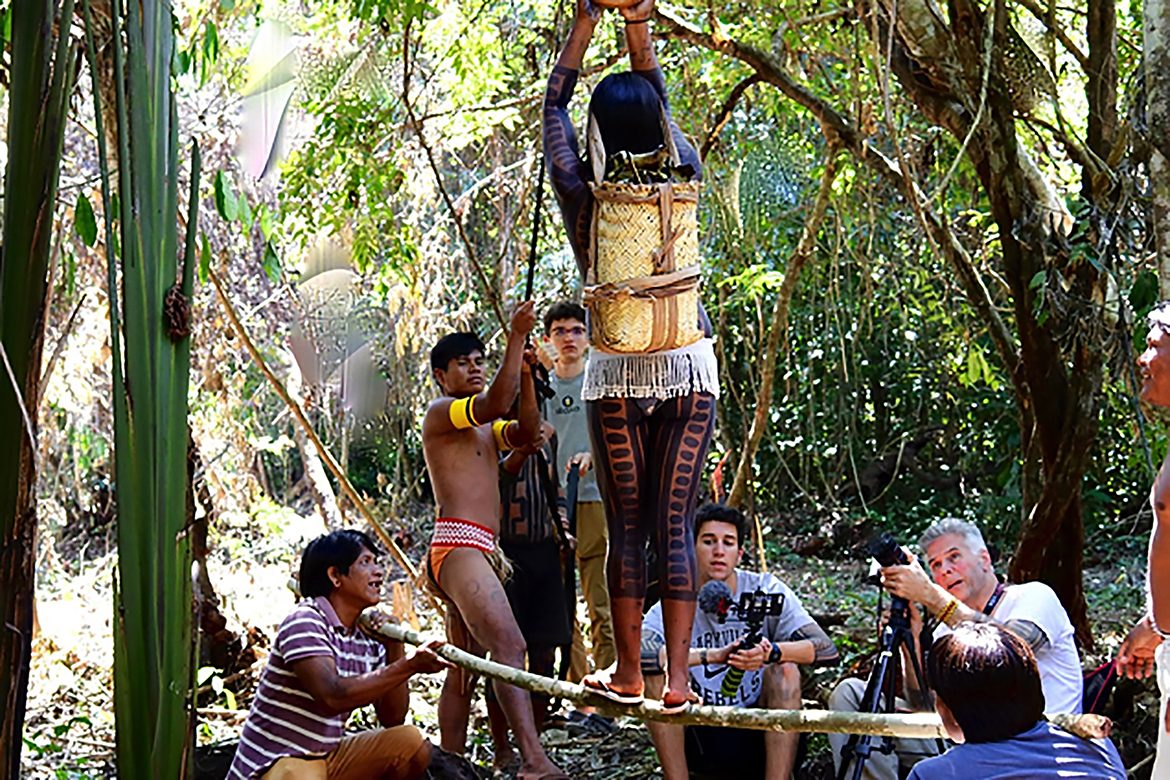 Teamwork by two MTSU professors on a project to help indigenous filmmakers tell their stories and share their efforts to save their Amazon rainforest has earned recognition and funding for the artists from the National Geographic Society.

Paul Chilsen, an associate professor of video and film production in the Department of Media Arts, wants to make a fourth trip this summer with students to work alongside the Kayapó people, who live along the Xingu River in northwest Brazil amid more than 27 million acres of rainforest.

Once there, they hope to conduct workshops in writing for film, operating cameras, designing sets and costumes, and acting.

Dr. Richard Pace of MTSU’s Department of Sociology and Anthropology, whose study-abroad trip with students in Brazil this spring was cut short because of COVID-19 virus threat precautions, wrote up the grant request for National Geographic with Purdue University professor Laura Zanotti, Kayapó filmmaker Pat-i and a team of indigenous and international filmmakers.

National Geographic responded with nearly $70,000 in funding for Pat-i and his colleagues to move ahead on their project, “Indigenous Filmmaker Warriors in Defense of Biocultural Conservation.”

Pace said the MTSU group hopes to continue their workshops this summer in the village of A’Ukre, Brazil. Unfortunately, the country’s health ministry confirmed the first case of COVID-19 among Amazon indigenous people April 1, leaving the plans still in limbo.

So far, the MTSU and Kayapó crews have worked on one film, “Nhakpokti,” the Kayapó love story of the descent of the Star Goddess and the origin of agriculture. There’s still a staggering checklist of tasks ahead, including academic conferences and journal articles and a post-project filmmakers’ workshop on social-media content guidelines for other indigenous conservation activists. 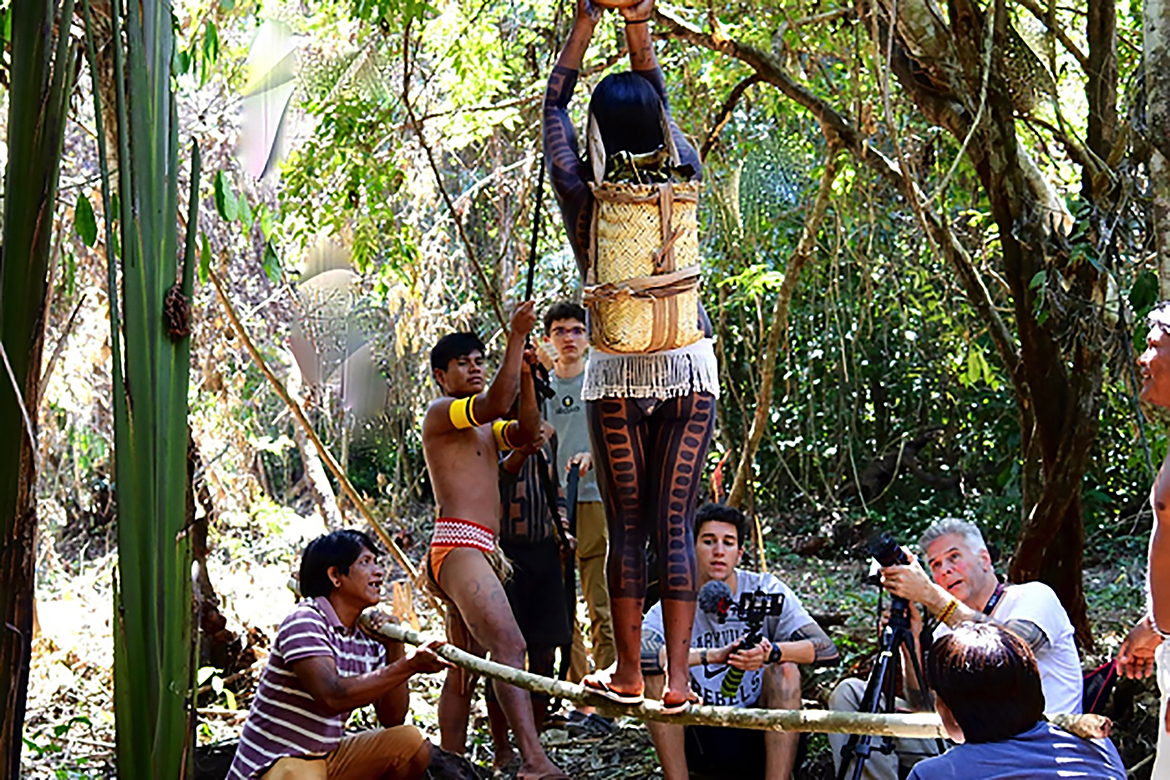 MTSU faculty, students and others work alongside indigenous Kayapó filmmakers in the Brazilian rain forest to film the descent of the Star Goddess to Earth as part of a July 2019 study-abroad project that helped the filmmakers receive a grant from the National Geographic Society for an expanded effort, “Indigenous Filmmaker Warriors in Defense of Bicultural Conservation.” Working among the Kayapó crew are actor Takato Kayapó, standing at center left; Yale University freshman Lucas Shepard, who served as translator and production assistant for the film project, standing next to a Kayapó actor as she portrays the Star Goddess; MTSU sophomore video and film production major Bryce Tuggle of Knoxville, Tenn., sitting at the feet of the “Star Goddess” with camera equipment; and Paul Chilsen, video and film production professor in the Department of Media Arts, seated at right. Kayapó filmmaker Pat-i is standing at right, partially obscured. (Photo courtesy of Richard Pace)

The Kayapó first met Western outsiders in the 1950s. They’ve increasingly used technology, particularly video, to boost their efforts to protect and preserve their land. Some Kayapó have said their video cameras are becoming the new weapons of their traditional warrior society.

The MTSU groups have been helping the Kayapó add storytelling techniques to their arsenal to share their culture, defend their rights and draw more attention to their conservation work.

“They want to speak to an outside world in a language that the outside world understands,” said Chilsen, who also serves as program coordinator for the department’s filmmaking concentration.

“The language of the screen is a global language, and that’s the push we’re trying to get into the stream of their life, so they can adopt what they need, adapt it to their ways and be able to communicate to the outside world in a way that’s meaningful and impactful.

“We were definitely out on the fringe, exploring new territory — a new direction for the Kayapó, unique challenges as filmmakers and learning that was off the charts,” he added.

“You might say it was the perfect classroom, where the exchange was multidirectional, multifaceted and deeply impactful for all of us.”

Bryce Tuggle of Knoxville, Tenn., a sophomore majoring in video and film production, was one of eight MTSU student participants in the study-abroad course turned international filmmaking effort. Among his unique opportunities was filming the Kayapó men’s Jaguar Ceremony in A’Ukre, Brazil.

“I knew this trip would impact me; I just didn’t realize how much,” Tuggle said. “I was there supporting the Kayapó filmmakers’ workshop, but they taught me also — not just about creative work but about the life I want to live. I learned more about myself than I had in my first 20 years.” 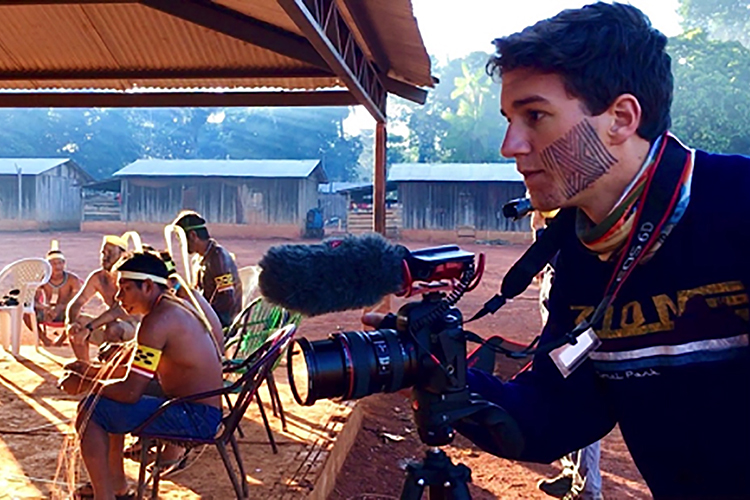 MTSU student Bryce Tuggle of Knoxville, Tenn., a sophomore majoring in video and film production, films the men’s Jaguar Ceremony in A’Ukre, Brazil, as part of a joint project between MTSU’s Department of Media Arts, Department of Sociology and Anthropology, and indigenous Kayapó filmmakers. Their work, part of a July 2019 study-abroad project, helped the Brazilian filmmakers receive a grant from the National Geographic Society for an expanded effort, “Indigenous Filmmaker Warriors in Defense of Biocultural Conservation.” Tuggle is wearing some of the Kayapó people’s traditional Genipap facial paint. (Photo courtesy of Paul Chilsen)

Pace said a growing number of the Kayapó filmmakers also have come to the United States for lectures, conferences and film festivals, along with visits to MTSU and events in conjunction with the Smithsonian Institute and Vanderbilt University.

When the Americans get back to Brazil, Pace said, “filming for the National Geographic project will … consist of two short films and a film series for social media focusing on the growing conservation efforts of the Kayapó. That project documents their tense struggles to sustain their environmental stewardship of one of the largest remaining protected rainforest areas in Brazil.”

Chilsen said MTSU’s nearly four years of learning alongside their Kayapó colleagues has been “an amazing experience” for everyone involved.

“Our students come at this with what they know and with what they’re told by their professors, then there’s the actuality of the way they experience things on the ground. Then they come to a new plateau of understanding themselves, and everybody’s knowledge advances,” the media professor said.

“That’s also a really valuable thing, especially for students that are in the world of media creation and understanding about the ethics of media — to learn really it’s not about ‘us,’ it’s not about what ‘we’ think as outsiders or Westerners; it’s about these people. It’s what we can learn from them, what we take away from them and how they can help us see the world better and through a different lens.” 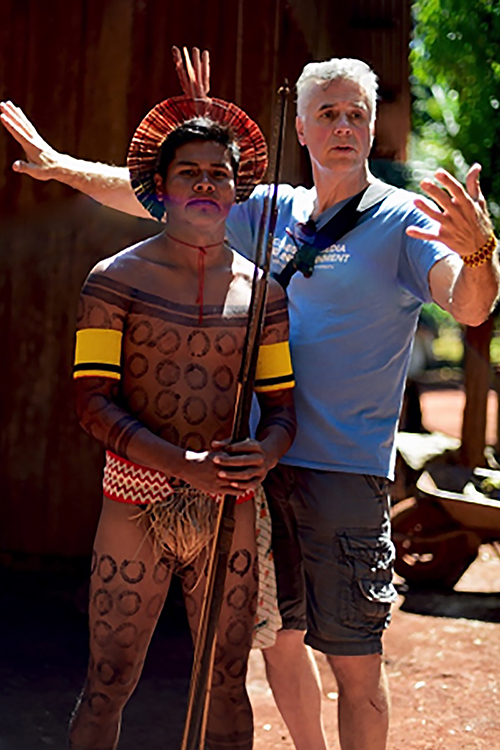 Paul Chilsen, right, video and film production professor in MTSU’s Department of Media Arts, directs Takato Kayapó during filming of “Nhakpokti,” the indigenous peoples’ story of the descent of the Star Goddess and the origin of agriculture, in the Brazilian rain forest. The film, part of a July 2019 study-abroad project, helped the international filmmakers receive a grant from the National Geographic Society for an expanded effort, “Indigenous Filmmaker Warriors in Defense of Biocultural Conservation.” (Photo courtesy of Glenn Shepard)