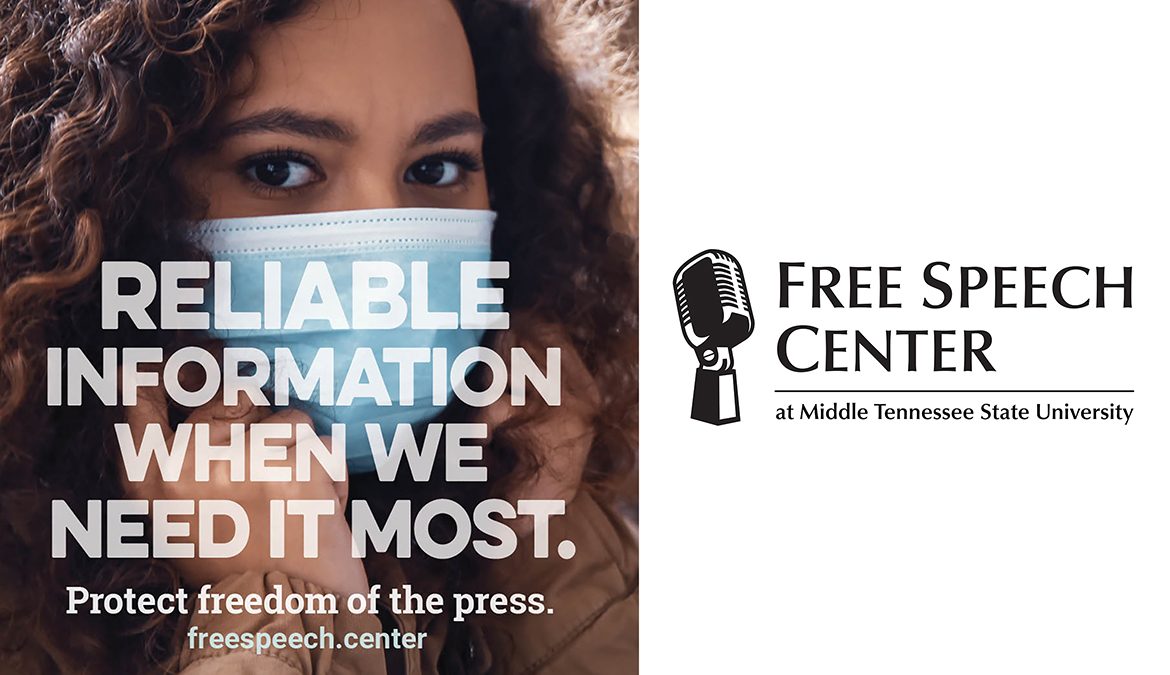 America’s news media play an invaluable role in keeping the public informed, especially when the nation — and the world — are facing a deadly and dispiriting pandemic. 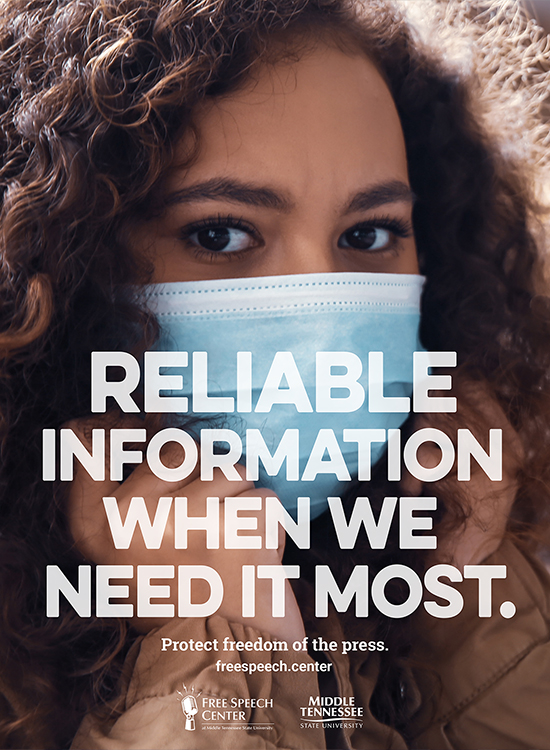 This ad from the Free Speech Center at Middle Tennessee State University is part of a new public service campaign to encourage public support for local media outlets providing regular, reliable information about the COVID-19 pandemic. Click through to see more of the ads.

That’s the message of a new national public service campaign launched by the Free Speech Center at Middle Tennessee State University. The center is teaming up with state and national press associations around the country with a blunt, on-deadline point about the importance of journalism.

The campaign’s ads feature a diverse group of Americans, each wearing a protective face mask, above text reading “Reliable information when we need it most. Protect freedom of the press.”

“In these dark times, people all over the world yearn for two things — an effective vaccine and reliable information about the virus,” said Ken Paulson, director of the Free Speech Center, based in the university’s College of Media and Entertainment.

“This campaign is designed to remind all Americans that the local news outlets so often caught in the partisan crossfire generated by cable TV are in fact serving their communities with the kind of COVID-19 reporting only they can deliver.”

The center’s initiatives include daily updates on the First Amendment and COVID-19 at http://freespeech.center.

Paulson noted that without balanced, updated COVID-19 facts from local newspapers, TV, radio and websites, audiences wouldn’t be relying solely on “fake news” from unreliable outlets. They’d have no news at all.

“When unthinking people let phrases like ‘fake news’ roll off their tongues, they fail to consider what ‘no news’ would look like,” said Paulson, who also is MTSU’s former media dean, a former editor-in-chief of USA Today and American Society of News Editors president, and the longtime director of the 1 for All Campaign for the First Amendment.

“Those of us who work to help the public understand and appreciate the value of a free press are often left to offer abstract arguments about accountability and transparency with frequent mention of First Amendment author James Madison. But today Americans are facing an unprecedented threat, and the information that media provide is saving lives.”

The Federal Communications Commission has noted media’s critical role every day in informing America about the pandemic, recently saying that this is “a time when information is one of the only weapons the American public has to protect itself from a contagious and deadly virus.”

Media in Tennessee, for example, are seeing governing bodies convene “private” meetings to discuss coronavirus developments in their areas, in potential violation of the Tennessee Open Meetings Act, or Sunshine Law, and potentially restricting residents’ right to know how the illness is affecting their particular towns.

And media nationwide are scrambling to balance the numbers of coronavirus-related hospitalizations and deaths reported by state agencies with numbers reported by the same hospitals, discovering discrepancies and what some have called government disinformation efforts aimed at underreporting numbers to allay public fears.

Newsroom cutbacks, furloughs and other staffing reductions also are threatening local media’s service to the public as media owners, fearful that advertising revenues already lost during the pandemic will never return, continue to try to contain costs.

“Local news media have never needed as much community support as they do now,” Paulson said.

The Free Speech Center at MTSU’s full resources include the unique First Amendment Encyclopedia, the world’s single most comprehensive free reference work on the five freedoms guaranteed by the first item on the U.S. Constitution’s Bill of Rights. The center’s resources are available to journalists, and the public, anytime at http://freespeech.center.

Established in August 2019 as a new nonpartisan public policy center, the Free Speech Center strives to build understanding and support for the five freedoms of the First Amendment — speech, press, religion, assembly and petition — through education and information.

A column by Paulson about COVID-19’s effect on local news is available here.

For more information about MTSU’s College of Media and Entertainment and its programs, please visit www.mtsu.edu/media.