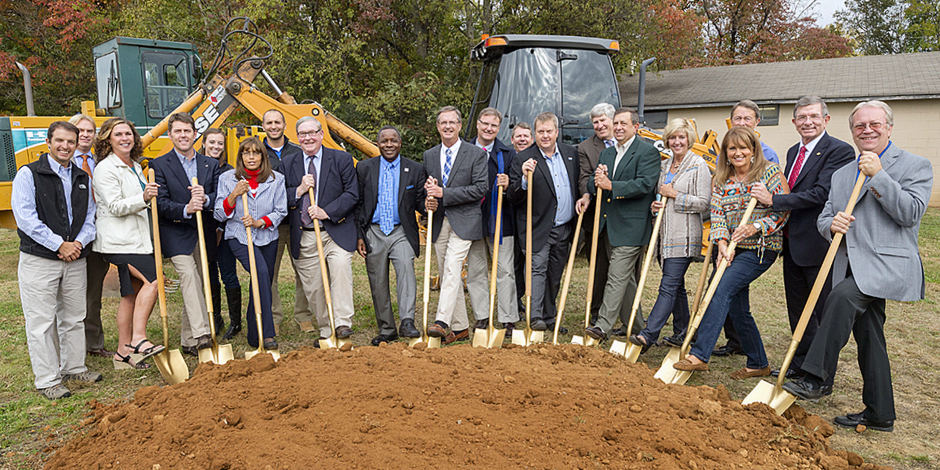 Located on Old Fort Parkway, the $3.7 million facility will feature eight indoor courts, electronic scoreboard, a pro shop, locker rooms, lounge area and meeting area. The facility will be open to the general public and serve as the home of the Blue Raider men’s and women’s tennis programs.

The tennis project is part of the university’s $80 million Centennial Campaign announced in April 2012. The state-of-the-art facility is expected to be ready by fall 2014.

“We are stepping up our game in all of our 17 sports as we make our presence known in Conference USA,” MTSU President Sidney A. McPhee said at the groundbreaking ceremony.

“This facility will make the Murfreesboro area a tennis destination. It will allow us to bid to be host of major competitions, including the C-USA championships, which in turn will create economic opportunities for the city and county.”

McPhee pointed to a previous successful collaboration with the city through the Hayes Track and Soccer Stadium, which plays a critical role in the city being able to host the Spring Fling high school sports championships each year.

An artist rendering on the facility’s interior.

The tennis project, which is being funded by a combination of university, city and private funds, received an additional boost Monday from the nonprofit Christy-Houston Foundation, whose president Bob Mifflin presented a $500,000 check to the City of Murfreesboro toward the effort.

“I want you to know, as residents, business owners and taxpayers in the City of Murfreesboro, the Christy-Houston Foundation has been a wonderful community partner, community volunteer and solid sense of support for our community,” Murfreesboro Mayor Tommy Bragg said.

The Murfreesboro Parks and Recreation Department will operate the facility, allowing Blue Raider tennis practices and matches to take place from November until March while also providing opportunities for the city to host other tournaments throughout the year.

“I think that what we’re going to become is one of the best tennis facilities in the Southeastern United States,” said Lanny Goodwin, director of Murfreesboro Parks and Recreation.

The partnership between the university and the city means that for the first time since 2008, the Blue Raider teams will have an indoor facility in Murfreesboro. Currently, the teams play at Nashboro Village, located nearly 30 miles northwest of campus in Nashville.

The new facility also will give the Murfreesboro community more opportunities to watch the Blue Raiders in action without traveling to Nashville.

You can learn more about the project’s history here and here.

MTSU President Sidney A. McPhee, at center on the podium, speaks at Monday’s groundbreaking ceremony of the indoor MTSU/Murfreesboro city tennis facility at Old Fort Park.

MTSU President Sidney A. McPhee, at center on the podium, speaks at Monday’s dedication and groundbreaking ceremony of the indoor MTSU/Murfreesboro city tennis facility at Old Fort Park.