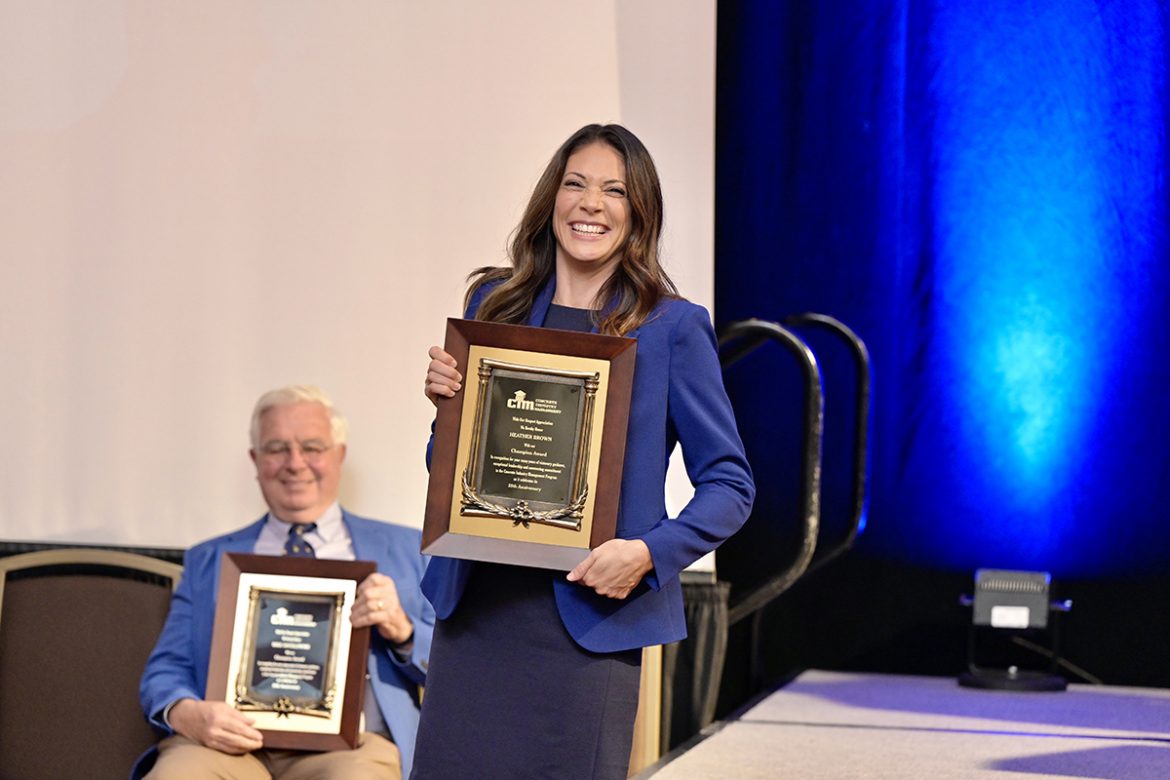 Heather Brown, the longtime professor and former director of the of the MTSU School of Concrete and Construction Management, was recognized by her peers and industry leaders at a special event Tuesday, Oct. 26, at the Embassy Suites Hotel Nashville SE Murfreesboro.

Brown, who was the face of the MTSU program for 20 years before leaving this year to become vice president of quality control and quality assurance with Indianapolis, Indiana-based Irving Materials Inc., received the Champion Award from the Concrete Industry Management National Steering Committee during the special 25th Anniversary of the organization. 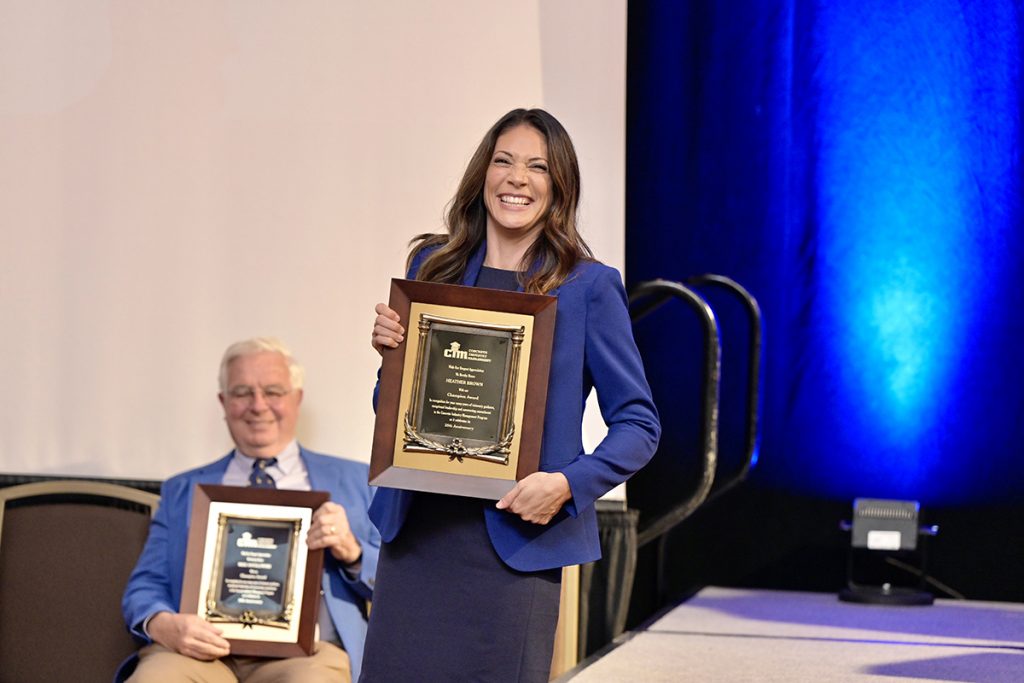 The former MTSU CIM leader, who is a member of the Tennessee Concrete Association Lifetime Hall of Fame, also received an award from the MTSU CIM Patrons, a group of concrete professionals serving the university program and students through financial, marketing and mentoring assistance in a nonprofit capacity.

MTSU hosted the anniversary celebration, bringing together more than 100 industry leaders from around the country, guests and the other CIM universities — Texas State, New Jersey Institute of Technology, California State University-Chico and the newest member, South Dakota State University, which joined in September.

In pre-recorded video remarks, MTSU President Sidney A. McPhee, who also attended the special occasion, called the CIM program “an incredible partnership between the university and the industry, and as one of the flagship institutions that started this 25 years ago, we are pleased to see the incredible results and the production of some outstanding employees for the industry.”

“On behalf of all of us at MTSU, I want to thank all of our partners for the great support you all have given us over the years. We are considered a top program because of your generosity and look forward to many, many more years of associations and partnerships with the industry,” added McPhee, who acknowledged the faculty, staff, partners, CIM Patrons and National Steering Committee under Gene Martineu’s leadership, and later personally welcomed guests. 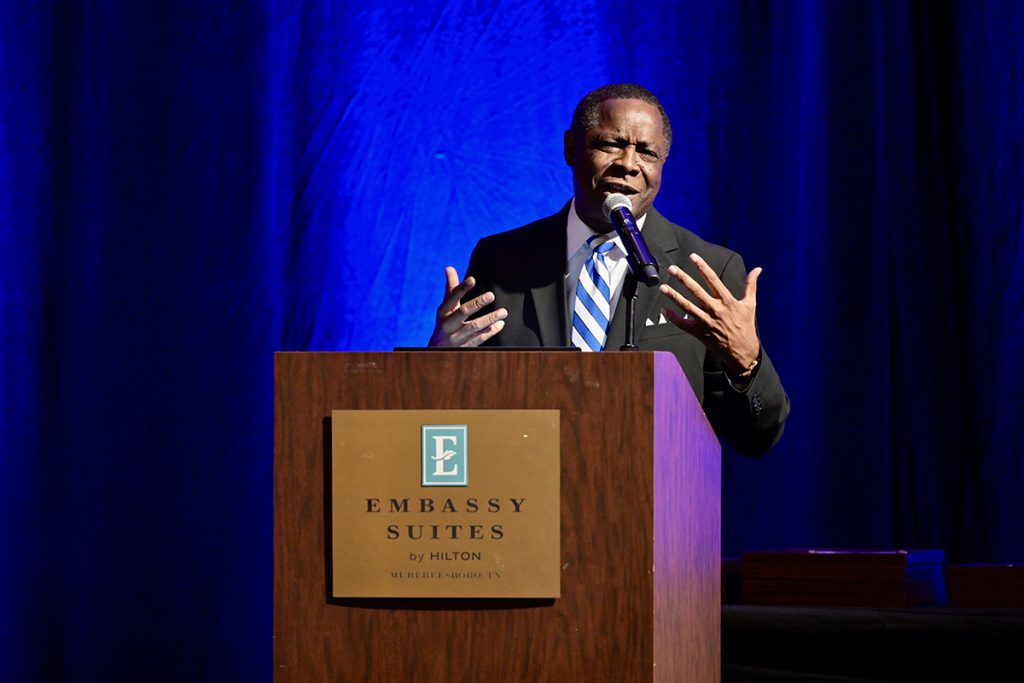 Attending the special 25th Anniversary of the national Concrete Industry Management program at Embassy Suites Hotel Nashville SE Murfreesboro Tuesday, Oct. 26, MTSU President Sidney A. McPhee shares about the growth of the program as he welcomed guests. Earlier this year, MTSU broke ground this year on a $40.1 million, 54,000-square-foot building with a scheduled opening set for August 2022. It features classrooms, faculty and staff offices and laboratory space. (MTSU photo by Andy Heidt)

“Their support has included hiring our students for full-time and internship positions, funding research programs, generous student scholarships, travel and industry networking events for students, faculty and staff, and most recently generous donations that allowed us to break ground on the iconic new School of Concrete and Construction Building set to open in Fall 2022.”

One of the recognized attendees was alumnus Chris Davenport (Class of 2000) of Murfreesboro — the very first CIM graduate and owner of Southern Concrete Machinery. 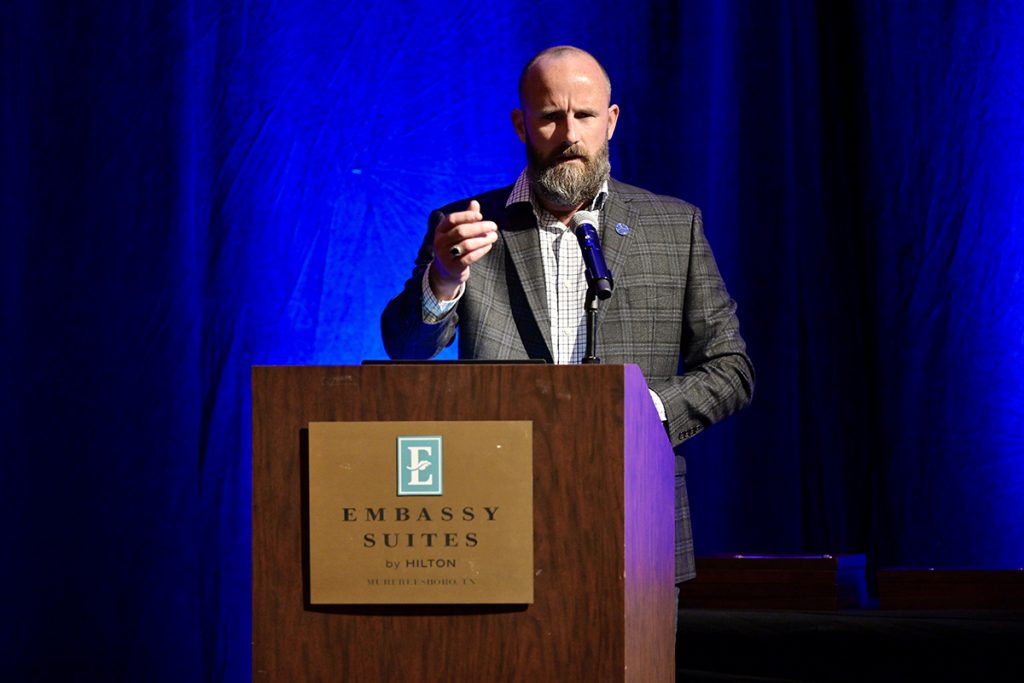 History of CIM at MTSU

In 1995, concrete industry leaders “recognized a need for a program to develop skills specifically suited for the concrete and construction industry,” said Jon Huddleston, clinical associate professor charged with guiding the program.

Those leaders included Ward Poston, Bob Elliott and the late Jim Speakman and Woody Crawley, who had the backing of then-MTSU College of Basic and Applied Sciences Dean Earl Keese. Austin Chaney became the first MTSU CIM chair. A scholarship is named for Keese.

MTSU began its program with two students in 1996 — and the popularity spread to other schools nationwide during the next decade.

The National Steering Committee held its first CIM auction in 2006 at the prestigious World of Concrete in Las Vegas, Nevada, an event McPhee later attended.

MTSU’s program expanded through an Executive MBA degree in 2012, with the first graduates in 2014.

In 2020, there were nearly 475 MTSU students pursuing CIM degrees.

MTSU broke ground this year on a $40.1 million, 54,000-square-foot building with a scheduled opening set for August 2022. It features classrooms, faculty and staff offices and laboratory space. 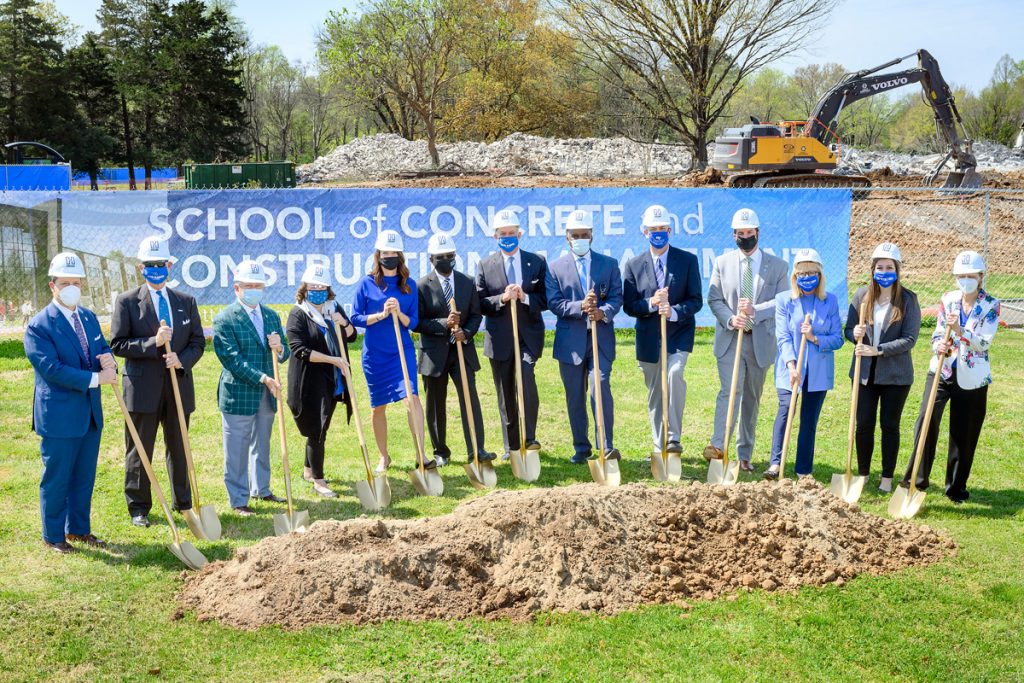 More than 1,300 students have graduated from the MTSU concrete program. 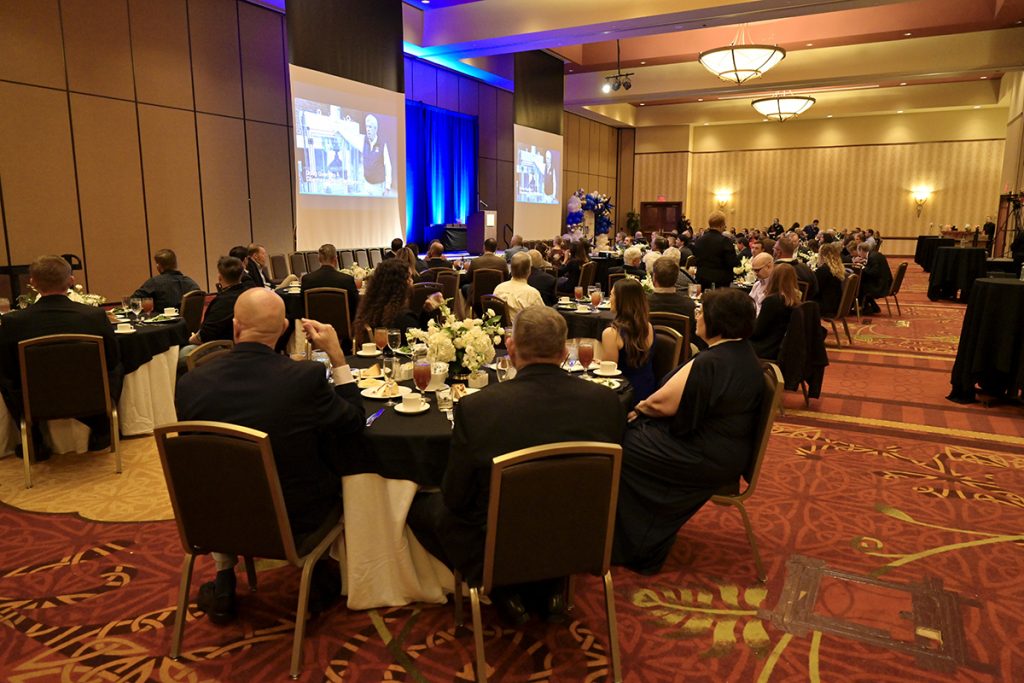 More than 100 people from around the country attended the 25th Anniversary for Concrete Industry Management, held Tuesday, Oct. 26, at Embassy Suites Hotel Nashville SE Murfreesboro. MTSU was the first university to join CIM in 1996 and continues to produce graduates for the industry. (MTSU photo by Andy Heidt)

This committee is a national-level, broad-based industry coalition, dedicated to a collaborative process in partnership with CIM institutions and local industry patrons groups. Its mission is to develop, support promote and sustain a network of higher learning educational institutions with programs producing graduates with degrees in CIM.

More than 25 awards were presented — 16 by the CIM National Steering Committee and 10 by the MTSU CIM Patrons. McPhee received one of the awards, and shared how Posten made of point of stopping by to see him on the then-new president’s first day on the job in 2001. 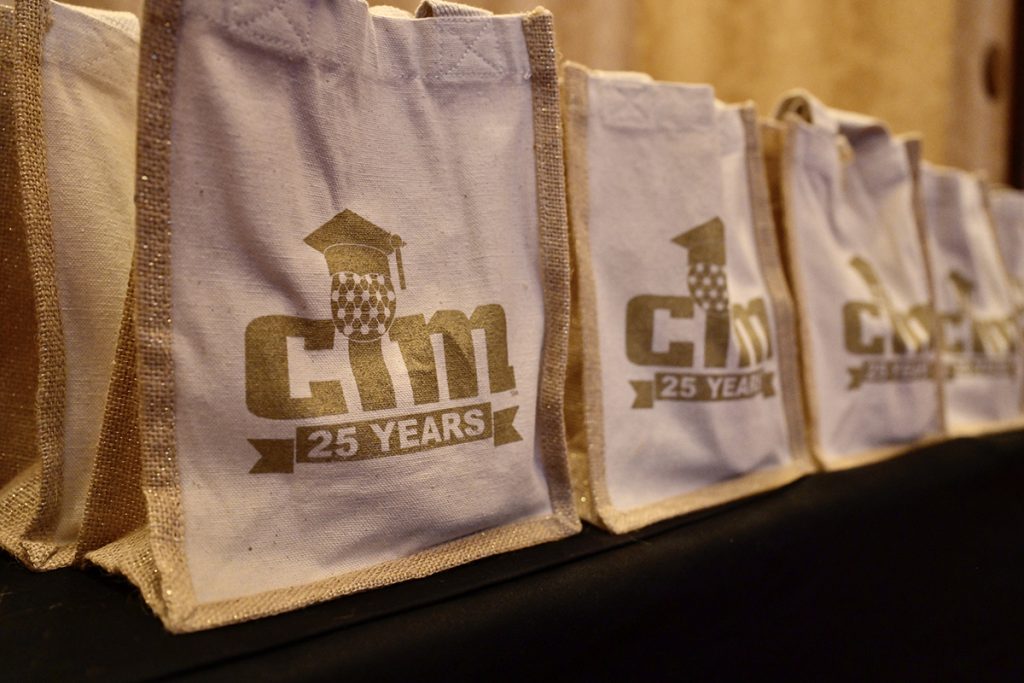 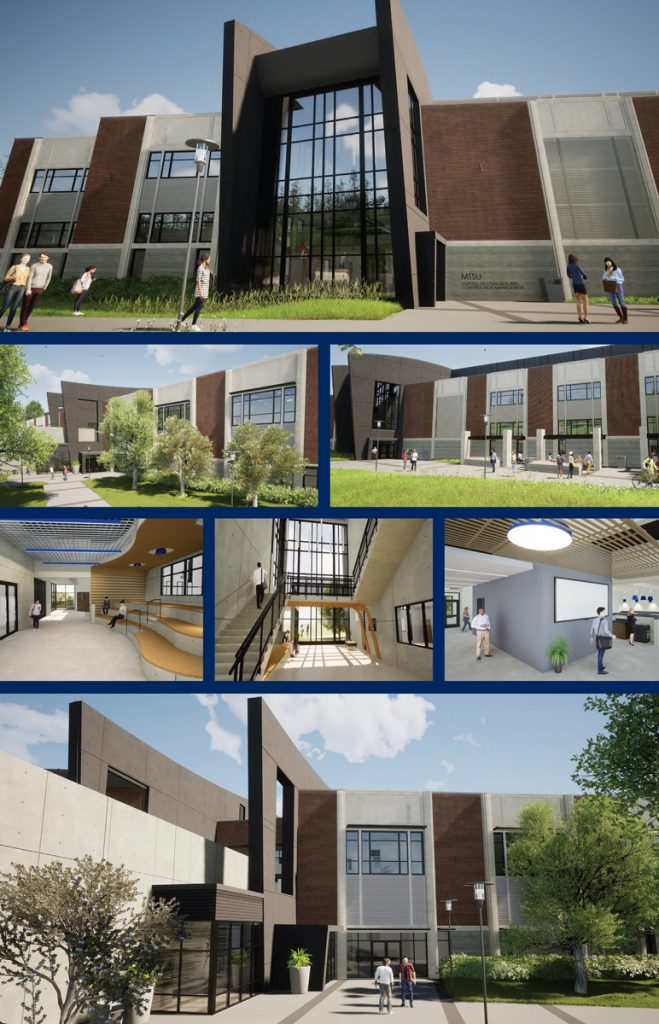 A rendering of the proposed 54,000-square-foot, $40.1 million School of Concrete and Construction Management Building. (Submitted)