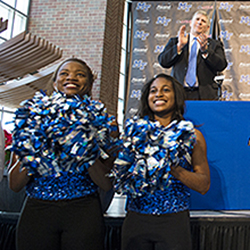 Middle Tennessee State University will become a full member of Conference USA on July 1, 2013, after agreeing today to separate early from the Sun Belt Conference.

MTSU announced Nov. 29, 2012, that it would join C-USA no later than July 1, 2014. However, the university decided recently to negotiate with C-USA and the Sun Belt to make the change effective with the 2013-14 academic year.

“While we have been proud members of the Sun Belt Conference, it was felt that it was in the best interest of the university, our student-athletes and supporters to accelerate our move to Conference USA,” said MTSU President Sidney A. McPhee.

“C-USA’s television partnerships, increased bowl tie-ins and larger national footprint will provide better and stronger platforms for our athletics program and our university,” he said.

The university has spent the last 12-plus years in the Sun Belt, where it has won eight All-Sports trophies and 54 conference championships.

MTSU, which joined the Sun Belt on July 1, 2000, will leave the SBC with a league-best 50 conference football wins, while also ranking first in victories over automatic qualifying conferences.

Other notable milestones in the MTSU-Sun Belt partnership include:

“We have enjoyed a great partnership with the Sun Belt Conference, which has provided us many avenues to further improve our athletic program,” said Director of Athletics Chris Massaro.

“We look forward to our future in Conference USA and are excited about developing new relationships with its member schools. I am really eager to see how our 2013 home football schedule shapes up.”

McPhee said the university will pay the Sun Belt Conference $700,000 to leave the league by June 30. MTSU will use funds from private donations to the athletics department to cover the $700,000, McPhee said, rather than tapping into state funding or other revenues.

MTSU agreed to pay the SBC half the sum within 30 days and the rest by June 30, the day before it joins Conference USA.

McPhee said MTSU will quickly recoup the money through higher returns from revenue sharing in C-USA.

“Middle Tennessee has been one of the amazing growth stories in higher education and intercollegiate athletics,” said C-USA Commissioner Britton Banowsky. “We are delighted to have them with us next year. The university has great leadership and will definitely contribute to our plan for the conference.”

The Blue Raiders will begin their quest for C-USA titles in August with eight available for men and nine for women.

MTSU will not field teams in men’s soccer, women’s rowing and women’s swimming and diving.

For more details, visit www.GoBlueRaiders.com. You can read the original announcement story here.