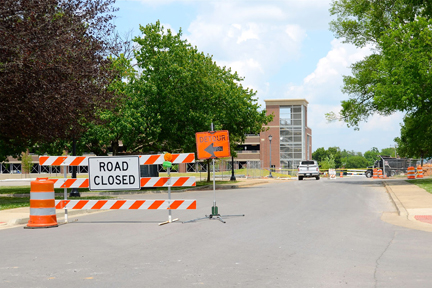 Orange barrels, yellow tape and a variety of fencing are sprinkled throughout the MTSU campus as construction projects progress. Here’s a summary of some of the major projects:

Construction on MTSU’s new $147 million Science Building, shown here in May 2014, remains on schedule for its spring 2015 official opening. (MTSU photos by News and Media Relations)

Significant move-in and set-up for labs will occur in July and August, with preparation continuing through the fall 2014 semester for the official opening in January 2015. There will be classes held in the building during the fall semester, and equipment setup will continue through the fall.

“For a building of that size and magnitude, it’s a complex process, so we’ve included preparation time for equipment move-in,” Miller said.

Approximately 1,500 new student stations will be provided in the labs and classrooms. The building will accommodate state-of-the-art teaching and research technologies.

The design features best practices in sustainability by meeting Tennessee State Sustainability Guidelines, and the completed facility will be the equivalent of LEED-certified.

In this May 2014 photo, roadwork continues on Lightning Way and Founders Lane.

Inclement winter weather affected the project schedule, although the new rotary has been opened for motorists this semester as construction continues. Completion of the overall project is expected in fall 2014.

Construction continues on a surface lot east of the new garage at the Student Services and Admissions Center.

All roadway projects are designed to improve shuttle bus efficiency and traffic flow, relieve traffic congestion, improve pedestrian walkways and lighting, and provide bike lanes into campus and around the perimeter of the academic core.

Lightning Way remains closed at Founders Lane as steam and water piping excavation work continues. The roadway will be closed during the summer and will open in August when final paving is completed.

The total cost for the roadway project is $8.36 million. It also includes the construction of a surface lot east of the new garage at the Student Services and Admissions Center, which has 679 total parking spaces including 16 ADA spaces. It will be ready for the fall 2014 semester.

Workers continue renovations on the second floor of the Cope Administration Building in this May 2014 photo.

A $3 million renovation project inside the Cope Administration Building began following the move of designated offices from Cope into the new Student Services and Admissions Center, which opened after spring break next to the Student Union.

Among the changes at Cope will be the relocation of the President’s Office from the first floor to the east side of the second floor, with the Provost’s Office moving into the vacated space. The Business Office will be relocated to both sides of the first floor, and improvements are also being made to restrooms, hallways, lighting and signage.

The relocation of Financial Aid to the Student Services and Admissions Center will allow the Information Technology Division offices to expand on the second floor.

The project may last up to a year, but may be finished within eight to 10 months.

A $2 million renovation project has begun on the McFarland Building.

The McFarland renovation is expected to be finished in late November, with the Photography Department moving in during winter break. The current Photography Building will then be razed sometime during the spring 2015 semester.

Murphy Center continues to undergo extensive renovations to its restrooms, lighting and acoustics as well as installation of a new roof and new HVAC equipment.

Murphy Center continues to undergo extensive renovations to its restrooms, lighting and acoustics as well as installation of a new roof and new HVAC equipment. Work began in December 2013.

The $12.64 million project is expected to be finished in September 2014 and will limit use of the facility during construction, including use by outside groups and organizations. Rutherford County high schools were notified previously to seek alternative locations for high school graduations for spring 2014. MTSU spring and summer commencement ceremonies will not be affected.

Athletics offices have been temporarily relocated to Floyd Stadium.

The $6 million project has been approved for renovations to offices. Future occupants include Graduate Business Studies for the Jones College of Business; the University College; the Office of Institutional Effectiveness, Planning and Research; the Tennessee STEM Education Center; the Aquatic Therapy Center in the Health and Human Performance Department; the Center for Counseling and Psych Services; and general classroom and training space.

Construction will begin by fall 2014 and move in is expected by summer 2015. Turner Construction is the construction manager/general contractor for the project.

Design has begun for a $700,000 Flight Simulator Building at the Murfreesboro Airport. The project will house flight simulators for the MTSU Department of Aerospace Department, a signature program at the University. Construction is set to begin in spring 2015.

Construction began earlier in the semester and is expected to be completed this summer on a new Professional Development Center inside the Ned R. McWherter Learning Resource Center.

Construction began earlier in the semester and is expected to be completed this summer on a new Professional Development Center that will allow the College of Education to host up to 150 K–12 teachers in a comfortable, professional setting where they can focus on the newest methodologies and standards in teaching.

The Learning Resource Center Room 101 space will provide a unique area, as the renovated space will serve pre-service teachers as well as teachers in the community in all areas of in-service, training, workshops, seminars, etc.

Murfreesboro Electric is building a new electrical substation off Rutherford Boulevard that will double the amount of electricity available on campus, a change that was needed with the opening of the new Science Building.

Boring work is underway beneath Rutherford Boulevard that will connect the substation to the campus electric system. The substation should be finished this summer.

Campus Planning officials say that all of the underground electrical work on campus in recent years was done in anticipation of the new substation coming on land. The substation upgrade will limit the impact of a power outage on campus.