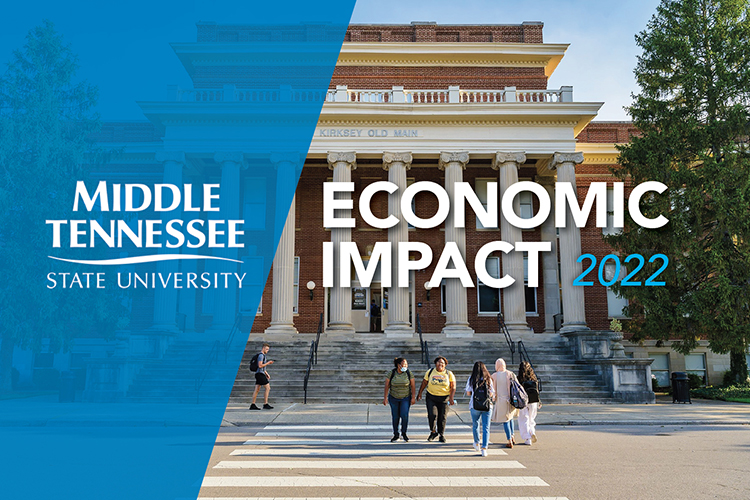 Middle Tennessee State University continues to be powerful economic engine for the region and entire state of Tennessee, responsible for more than $1.42 billion in economic impact and almost 11,500 jobs statewide in 2021, a new economic report released Thursday (Jan. 20) shows.

In addition, the report by the Business and Economic Research Center in the Jones College of Business shows that the university, as Murfreesboro’s second-largest employer (2,270 jobs), generates $143.6 million in local, state and federal tax revenue — a significant rise over 2017’s $88 million.

“MTSU takes great pride in our institution’s economic impact on this community, region and state as we fulfill our mission of preparing the next generations of community leaders, entrepreneurs and highly skilled professionals across the workforce,” said MTSU President Sidney A. McPhee.

“In addition to being a top employer in the community, our university not only attracts top scholars from across the state, but our graduates overwhelmingly remain in our region and state to give back to their communities and in turn their local economies.”

In 2021, 90 percent of the almost 21,000 students at the university were from Tennessee; 79 percent of MTSU alumni live in Tennessee.

“MTSU, as a vital part of our postsecondary ecosystem, is providing a robust talent pipeline for employers whose primary concern right now is access to a skilled workforce. When companies are creating jobs in Middle Tennessee, being able to point to institutions such as MTSU gives us a competitive advantage that will help ensure economic prosperity for our region both now and in the future.” 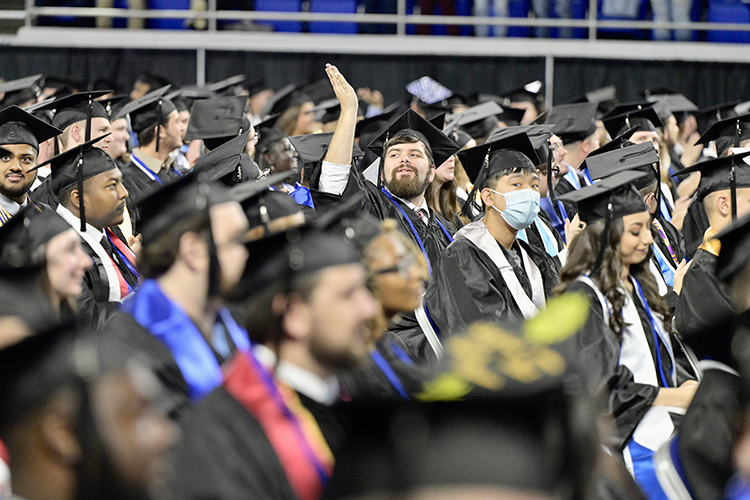 A graduating senior at MTSU acknowledges a friend while he and his fellow grads wait for the fall 2021 commencement ceremonies to begin in Murphy Center Saturday, Dec. 11. The university presented degrees to more than 1,670 students in three commencement events to conclude the fall semester. (MTSU file photo by Andy Heidt)

The study also shows MTSU brings nearly 300,000 people to Rutherford County each year. Spending by visitors account for more than $60 million, and that translates to almost 800 jobs. These results happened despite the impact that the pandemic had on travel and cancelation of events.

The findings come after a similar 2017 economic impact study by BERC that outlined the institution’s broad impact, with the latest report showing significant increases in that impact in several key areas, despite the economic slowdown throughout the U.S. economy due to the pandemic: 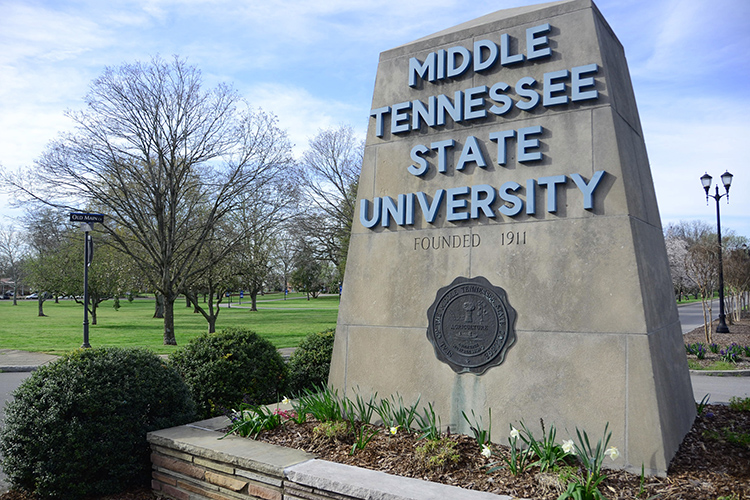 Meanwhile, MTSU alumni have gone on to key leadership positions in the community, with the mayors of Rutherford County, Murfreesboro and Smyrna all boasting MTSU degrees and also understanding the university’s importance on making the community one of the fastest growing and most attractive in the state and nation.

“Rutherford County is so blessed to have MTSU in our community. This nationally recognized institution of higher learning is recognized as one of the largest economic engines in the state,” said Rutherford County Mayor Bill Ketron. “As mayor, I talk to new citizens every day. I always ask, ‘Why did you move here?’ They always say, having a university like MTSU, it sets the environment for a county in which they want to live in and raise a family.”

“Whether it’s educating a highly skilled workforce, serving the greater Murfreesboro community outside the confines of the university, or investing in capital projects in partnership with municipal and county government, Middle Tennessee State University continues to be a major part of the identity of our growing economy as one of the most attractive places to live, work and raise a family,” McFarland said.

“Middle Tennessee State University is a key economic driver on a local, regional, and statewide level,” added Reed. “As a proud graduate of MTSU, I believe we are fortunate to have a top-notch, affordable higher education institution right here in Rutherford County. MTSU is an invaluable partner in recruitment of industry to our community and ensuring we have a well-trained workforce for generations to come, significantly impacting our resident’s quality of life.”

BERC Director Murat Arik said the study, which began in September 2021, shows MTSU’s ongoing “significant” impact on the region’s economy and that the university “is key to the prosperity of Middle Tennessee.” 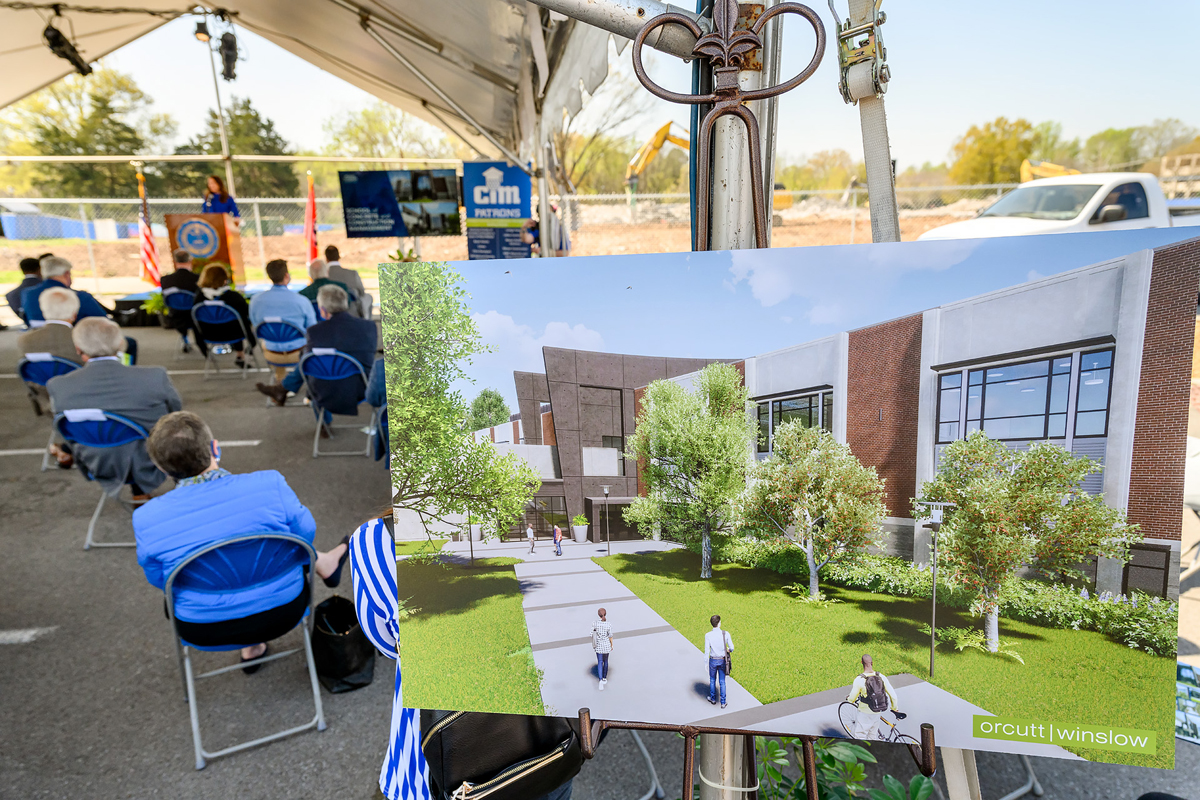 An artist rendering of the 54,000-square-foot School of Concrete and Construction Management Building is shown in the foreground as MTSU School of Concrete and Construction Management professor Heather Brown speaks to the crowd Tuesday, April 6, during the groundbreaking ceremony for the new facility, scheduled for a Fall 2022 completion. (MTSU file photo by J. Intintoli)