Roomie Rules: How to Adjust to.. 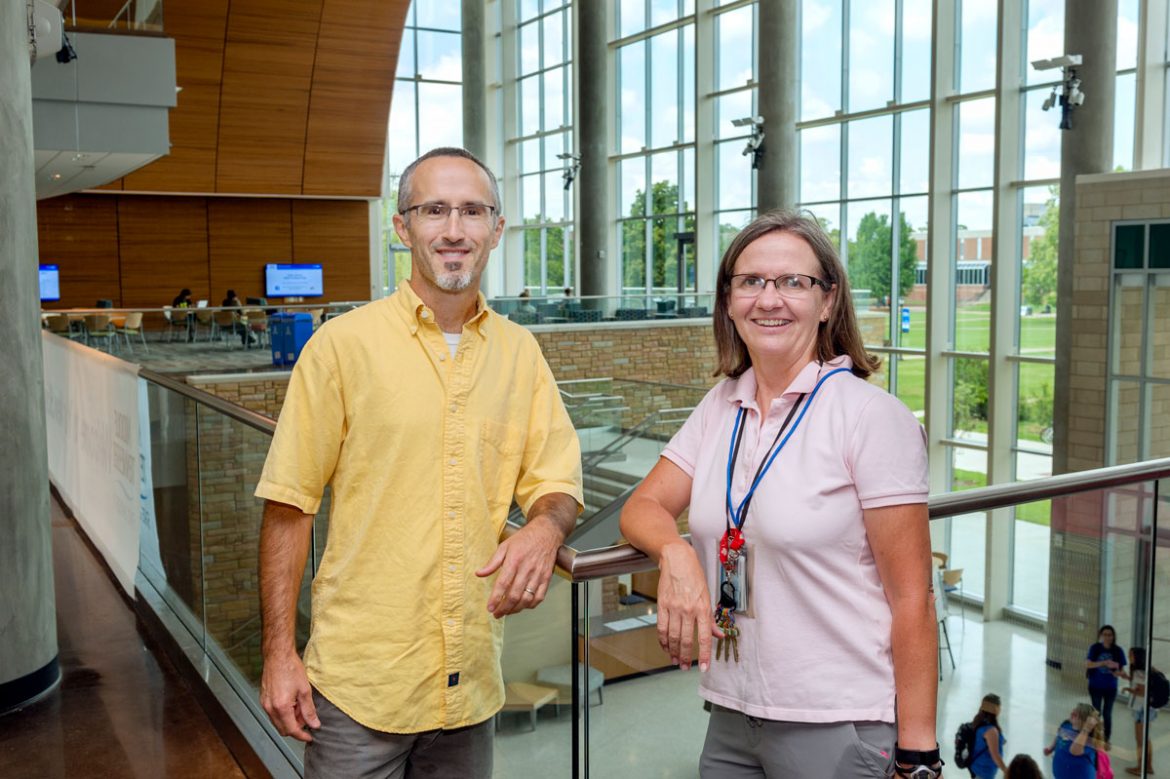 This week, the Student Voice is meeting up with Dr. Amy Phelps of the chemistry department. She’s filling us in on how she engages students, how chemistry applies to all of our lives, and how MTSU goes the extra mile to get kids interested in science!

Thanks for talking to us today! So where did you go to school?

I went to Berry College in Georgia for my undergraduate degree, and I received both my master’s and my Ph.D. from Purdue University in Indiana.

How did your interest in chemistry begin?

I’ve really always loved science. When I was in elementary school, I was a big fan of these Scholastic book-club books about things like making invisible ink and building volcanoes, so that probably sparked my scientific interests. I’m not entirely sure when I chose chemistry as my focus. My parents are both mathematicians and I always knew I didn’t want to do that, but chemistry is very close to math, only with lots of colors and fire! When I first went to college, I thought about doing engineering, and then journalism, too; I was interested in a lot of different things. But when I started taking chemistry in my freshman year, I knew that was it.

When did you decide that you wanted to teach?

What’s your approach to getting students engaged in chemistry, especially at the gen-ed level?

First of all, I believe that learning is something that I can’t do for somebody else. I can teach well, and still have students not learn unless they’re willing participants. I try to get my students to talk, and I try to bring things to class; I’m pretty old-school about using demonstrations and data. Another thing I do is wait a long time for my students to answer questions, especially early in the semester. I’ll ask a question, and then just stand there and stare at them until somebody decides to answer it. After the first couple weeks, it doesn’t take long at all for people to start answering!  Really the most important thing is letting students know that I’m on their side, and I want to help them succeed. Some students come to college with the idea that it’s professors against students, and that’s not the atmosphere that I’m trying to develop. If I wanted them to fail, that would be really easy, and what a sad commentary that would be on what I’ve chosen to do with my life.

How do you relate the study of chemistry to students across different majors, including non-science majors?

I think that chemistry can offer everybody a method of thinking and a way of problem-solving, a way of looking at the world and trying to make sense of it, and everybody has that challenge as they go through life. You’re going to face data about different things and have to make a logical decision based on that data, whether in your personal life or in your community. For example, in this community we’re faced with the problem of the Murfreesboro landfill filling up, and we’ve got to try to fix that issue by looking at the data and trying to reach a rational decision for a problem that’s going to affect all of us. The study of chemistry requires you to work together with people in reviewing facts and proposing solutions, and those are the kinds of skills that employers want, no matter what your field is.

Can you tell us about the different programs that the chemistry department participates in?

Sure! One of our faculty members, Dr. Pat Patterson, is the regional director of the Science Olympiad, a science competition for middle-school and high-school students. The best teams from our regional competition will go to Knoxville to compete in the state tournament, and then those winners will go on to the national tournament. We also run an elementary-level science Olympiad, which doesn’t go on to any further tournaments, but the younger kids have a lot of fun with it. You have parents and kids running around and cheering for science, and it builds kids’ enthusiasm for the subject. Also, I just finished working with a CSI: MTSU camp this summer in conjunction with the forensic anthropology department on campus, and that’s another program with a middle-school and high-school focus. We’ve had kids from the Science Olympiad and the CSI camp end up at MTSU as students! In fact, some of the best MTSU student volunteers helping out with these programs each year are kids who went through the programs themselves. Our department also helps with various science fairs at different schools, and we have a connection with the Murfreesboro Discovery Center. I personally am the co-director of the MTeach program, which is our math and science secondary-ed teacher program. And Dr. Iriarte-Gross of our department runs Expanding Your Horizons, which is a program specifically targeted to get middle-school girls interested in science. It draws a huge crowd each fall!

That’s cool that MTSU has programs specifically aimed at getting young girls interested in science.

We focus on the girls because they tend to lose interest in science around middle school. Up until middle school, female students are just as interested in science as male students, but many of them turn away from it for different reasons, so we make an extra effort to retain their interest.

Did you ever encounter any difficulties with being a female in a scientific field?

No, I wouldn’t say I’ve ever felt any hardship being a woman in science. I did often feel as if most of my friends were guys, though! In fact, in grad school, my roommates were guys because there just weren’t that many girls. But personally, it never bothered me too much. In fact, the department here at MTSU has actually been nationally recognized by the American Chemical Society for the number of women employed here; we have an unusually high number of tenured female chemists in this department.

Awesome! Can you tell us about a lesson from your own college experience that you’d like to impart to current students?

It may sound trite, but I would tell students that if they want to succeed, the first step is actually being there. Some students—especially freshman—are overwhelmed with the level of freedom they encounter when they first come to college, and they embrace the fact that nobody’s going to make them go to class. But the lesson that I learned early in my college career was that it’s so much easier to just show up for class than to be absent and have to catch up on all your work. I believe the same thing as a professor, actually; it’s so much extra work for me to be absent!

Have you experienced issues with technology as far as students being physically present, but not mentally engaged?

Absolutely, but I try not to fight them too much on it; I try to get them to use the technology as much as possible for what we’re studying, to integrate it. I came along at the end of slide rules being used in the classroom; scientific calculators were a big thing when I was in middle school, and there were people who really fought against that and didn’t want them used in their classrooms. My parents were math teachers, and I remember my dad saying “There’s going to come a time when students won’t have any idea how to use a slide rule!” Well, guess what? I never learned how to do anything except sword fight with a slide rule! And people now would think it’s ridiculous to not allow students to use calculators. I think someday, we’ll have the same conversations about the technology we’re fighting about now, so I think we should be focused on finding ways for kids’ technology to be useful in the classroom, such as using their phones as clickers so they don’t have to purchase a new clicker for each class. It’s a challenge, but it’s one I’m working with.