MTSU Out of the Blue: Septembe.. 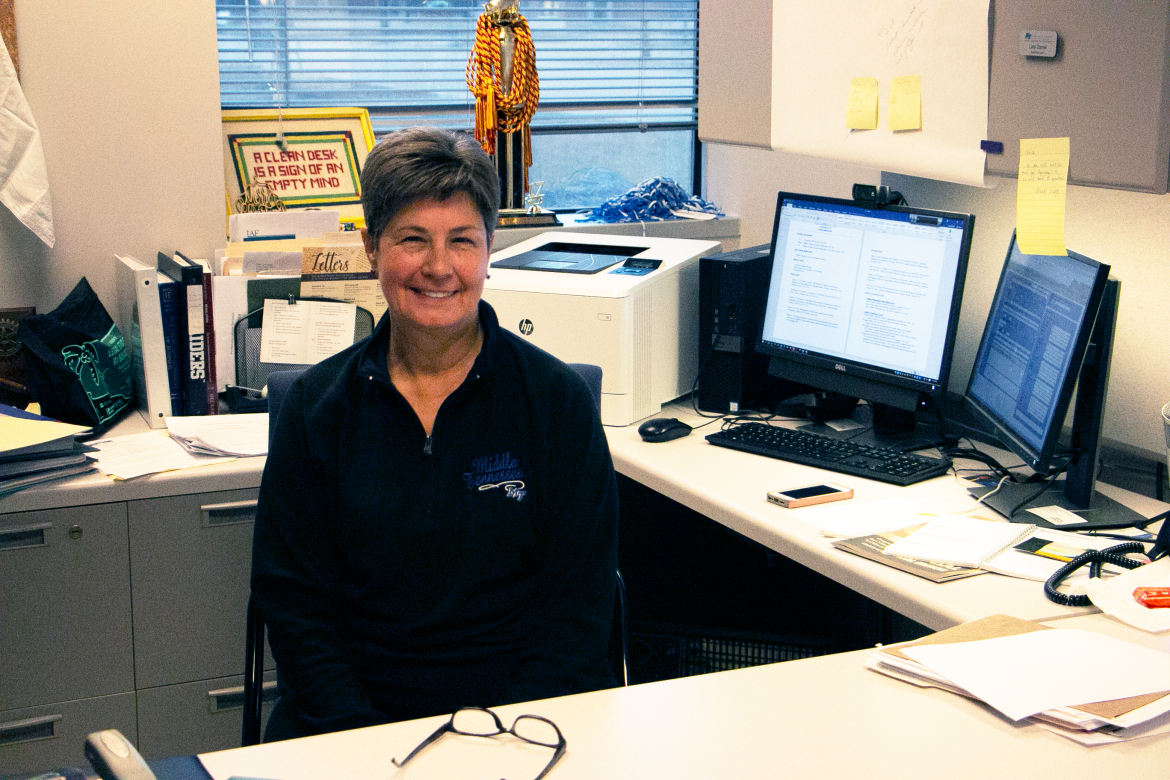 The MTSU Student Voice Faculty Spotlight has highlighted amazing professors, and this one is no different. Meet Lara Daniel, professor of business law and assistant dean for assessment in the Jennings A. Jones College of Business. Like the gunslinger of old, Daniel fights for the law — albeit with contracts and fancy words instead of bullets. As a core pillar of the College of Business, there are few business students out there that Daniel hasn’t influenced in some way. And when you look at her credentials, it’s easy to see why. With over 30 years of legal experience and teaching under her belt, Daniel is the go-to fount of knowledge for students looking to make it big in the world.

Daniel sat down to discuss law, 30-year accidents and a made-up brand all about her. The results, as always, can speak for themselves.

1. Thank for speaking with me! So, tell me about what you do here at MTSU.

“I teach business law, primarily a course called ‘Legal Environments of Business’, which is in the core curriculum for the college. That means that every business major, regardless of whether they’re finance, economics, accounting, marketing — we have a dozen or more majors within the college — every student who has any major in this college has to take that course. I’m part of the foundation of the curriculum that they use to build on for their major. Now I also teach a couple of other courses, (like) a course in property law. … And then I occasionally teach a course in commercial law.”

2. How did you get to your position here?

[Laughter] “Well, the short answer to that is by accident. I’m not like most of the members of the faculty. I didn’t go through an academic program intending to become a college professor, or one that prepared me to be a college professor. I got a law degree! And I intended to practice law, and I did practice law, for a little while. But early on — actually, right after I graduated from law school — I was coming back here to Murfreesboro (because) I grew up here, and I got a phone call from somebody who said, ‘We need somebody to teach some of these business law courses.’ So I thought, well okay, maybe I’ll give it a try.  And I did!

“I did it part-time for a few years, and I really liked it. And then somebody quit, and they said, ‘We really need somebody this fall, full time, would you be interested?’ I was ready for a change … so I took the full-time position and I’ve been here for over 30 years. … I give myself a little bit of the credit for being open to an opportunity, one that wasn’t necessarily in my plans. Sometimes those are the best.”

3. Why’d you come back to Murfreesboro?

“Well, it’s my home. My dad was a professor here at the university, so it’s not really much of an exaggeration to say that I grew up on campus. He taught educational leadership in the College of Education. And my whole family was still here, and so this was where I wanted to go.”

4. Do you have a favorite memory from any of your classes?

“Oh, there’s so many. One was when I was teaching in Peck Hall, and it was smaller than the rooms that we have here in the BAS (Business and Aerospace Building). I don’t remember exactly what we were talking about, but there was this moment of silence, and a young woman on the back row turned to another person sitting there sitting next to her. And I’m sure she meant for me not to hear, but she said, ‘Sometimes, I wish she would just tell us the answer!’ And I just thought, ‘Hmm.’ You know that was one of those comments that in her mind I’m sure was a complaint, but I thought, ‘That’s good. That’s really good.’ And every once in a while, after the course is over, (I get) a comment from students like ‘What I learned in your class was that I don’t need a talking head on television to tell me what to think,’ so that’s really good. When I get comments like that from students I feel like I’ve accomplished something. So those stand out.”

5. Why do you think business law is so important for students to know?

“First of all, I think the legal system is an important part of democracy. The rule of law is the foundation of democracy. I think it’s incumbent on everyone who’s a citizen to know something about the legal system. And I think that our secondary schools have whittled that away. When I was in school, you took civics and learned something about government and law, and I’m not sure they do that anymore. So I think it’s important for everyone to know something about legal principle. I also think that the best way to learn about legal principles and rules is by studying the decisions that have been made by courts. … When we have to study the way somebody else made a decision, we’re bound to learn something. … And I think we all need to recognize that some transparency and explanation on how you made a decision contributes to its credibility. If I don’t know how you arrived at this conclusion, I’m not as likely to accept it. I think law lends itself to the study of that decision-making process, and business people and everybody else can incorporate the best of that into their own processes.”

Daniel laughingly added that students should really study law because “who on earth knows what you’ll find?”

“I was talking in class and we were discussing a case, and this student said something about this being hypothetical, and I said, ‘This is not hypothetical!! This stuff really happens!”

6. Do you have advice for students on how to get the most out of their faculty?

(If you’re looking for the courage to go talk to your professors, don’t worry- we understand. Check out ‘How to Make Your Professor Your Biggest Ally’ to conquer your fears.)

7. Do you have any advice for students in general?

“If there’s one thing I think students ought to do more of while they’re in college, it’s taking advantage of study abroad. I just think that this is the best opportunity that you will have to discover other places and cultures. Do it now! It’s the ultimate experiential learning experience, seeing something for yourself. I like history, so I like to travel to places where they have more of it than we do in the United States. We think something’s old if it’s 200 years old! I really enjoy going to places where have things you can see that are much older than that. And no picture will do it. No description, no video, is as good as seeing it for yourself.

“You can say, ‘Oh, I’ll put that off and do it after I graduate,’ but I just don’t think it’s the same. I think it’s an experience that will benefit college students while they’re still in college. And I think that going as part of a group or going to another university in the context of a college course is a good way to start.”

8. Last question! If you had a brand all about you, what would be your motto/slogan?

“Oh, that’s a hard one. It’s gotta be something about … process. I guess it’s … ’How you play the game.’ Because I think how you do things is so important. If the process is right, the outcome will be okay. But if you don’t know what your process is, if you don’t have one, if you can’t explain it to someone else, then you just can’t expect anyone to pay much attention to what your conclusions are.”

Author Angele Latham is a senior at MTSU, majoring in visual communication in the School of Journalism with minors in criminal justice administration and global studies. The views and opinions expressed above are her own and don’t necessarily reflect the official policies or positions of Middle Tennessee State University.