State of the University Addres.. 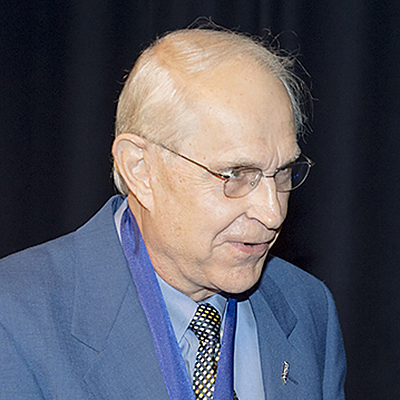 The MTSU Foundation celebrated 17 faculty members for their outstanding work and service to the university and community with special awards at Friday’s Fall Faculty Meeting in Tucker Theatre.

Dr. William F. Ford, left, economics and finance professor and holder of the Weatherford Chair of Excellence in Finance in MTSU’s Jennings A. Jones College of Business, accepts congratulations from President Sidney A. McPhee Friday. Ford received the 2013 Career Achievement Award from the MTSU Foundation. (MTSU photos by Andy Heidt)

Highlighting the recognition was the Career Achievement Award presented to Dr. William F. “Bill” Ford, professor of economics and finance and holder of the Weatherford Chair of Excellence in Finance in the Jennings A. Jones College of Business.

The 12th honoree to receive the award, the 77-year-old Ford thanked the selection committee for an honor he never thought he’d receive, even though he was on the original committee that created the award and determined the award’s criteria.

“In the 22 years I’ve been here, I could not think of 22 days of stress I ever suffered,” he said. “Truth be told, I’d have a hard time finding two or three days that were stressful rather than joyful, working with all of you and our staff.”

A former president and CEO of the Federal Reserve Bank of Atlanta in the 1980s, Ford has for years been tapped by local, regional and national media for his expertise on macroeconomics, finance and banking. In presenting the award, Provost Brad Bartel noted Ford’s numerous academic achievements as well as his community and professional service.

“The high placement of graduates in the financial institution management program speaks to Dr. Ford’s commitment to his students, both academically and professionally,” Bartel said. “Students, academic colleagues, and industry professionals have greatly benefitted from the breadth and depth of Dr. Ford’s banking and finance acumen.”

Ford received MTSU’s Outstanding Public Service Award twice, in 1996 and 2004, and the Distinguished Research Award in 1998. In 2004, he also received the Tennessee Board of Regents Academic Excellence Award for managing the Weatherford Chair of Finance’s programs.

“I’ve had a wonderful time here the past 22 years,” he said.

You can watch a video about Ford and his career achievements below.

Congratulated by Foundation President Bill Mooningham, the other honorees included:

You can view the program from Friday’s Fall Faculty Meeting, which includes full-page features on each professor’s accomplishments and award details, at http://tinyurl.com/MTFacultyAwards2013.