MTSU volunteers help students move in at ‘We... 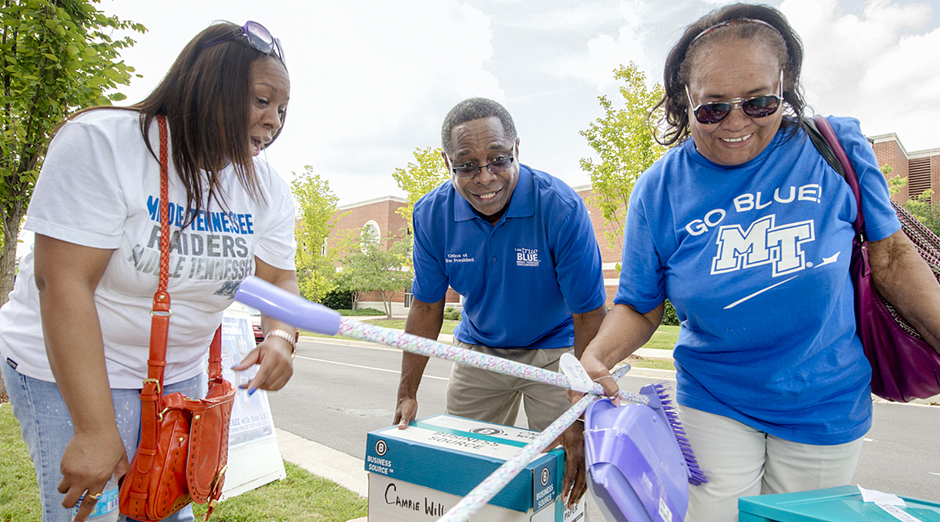 Hundreds of new MTSU students and their families descended on campus Friday to move into their dorms, but they didn’t do so by themselves.

Students, faculty and staff turned out on a steamy summer day to help the newest additions to the Blue Raider community get settled into their new homes during the annual We-Haul event, which continues until 4 p.m. Saturday and is still accepting volunteers. Most students start fall classes Monday, Aug. 26.

MTSU freshman Summer Ward, an elementary education major from Johnson City, Tenn., was among a steady stream of students, parents and others helpers going in and out of Corlew Hall, waiting their turn at the elevators to take belongings to dorm rooms.

Moving in was a somewhat “scary” experience for Ward, who with her parents, Danny and Donna Ward, had just finished a four-hour drive from East Tennessee to their destination along MTSU Boulevard.

Click on the image above for a listing of 2013 Week of Welcome events.

“I’m proud as a peacock,” a smiling Danny Ward added. “She’s coming to college all this way. … We like it (here.) We went to (tour) Appalachian State and UT before coming here, and hands down, this is the prettiest campus and the friendliest people that we came across. That made it easier to send her down here.”

While her eldest daughter, Haley, and husband, Rodney, were upstairs getting settled into Haley’s room at Corlew, Judi Gray of Memphis shared her optimism about her daughter’s decision to attend MTSU, where she’ll major in physical training/sports medicine.

“This is our first experience of dropping a freshman off at school,” Judi Gray said, adding that they deeply appreciated the assistance from the We-Haul volunteers.

“Two gentlemen came over to help us. Everybody’s been very nice and very supportive,” she said. “Even when we came for our college tour, we were impressed with how nice everybody was. Their willingness to help has been wonderful.”

We-Haul is the first of MTSU’s numerous Week of Welcome activities that run through Thursday, Sept. 5.

Freshman Hannah Forsythe from Crossville, Tenn., stood on the sidewalk holding her mattress as a We-Haul volunteer grabbed some of her belongings and whisked them into the dorm.

“They’ve been a big help with all of the heavy stuff that I could not carry,” said Forsythe, a forensic science major who arrived on campus with her parents, Jerry and Jill Brown.

It was Johnson’s first time volunteering for We-Haul, an experience she said was rewarding and beneficial in myriad ways.

“It’s a good networking opportunity to meet people who aren’t from this particular area,” she said.

Jackie Victory, director of the MTSU Office of Leadership and Service, said some new additions to the process included the We-Haul traffic crew as well as crew leaders to make the process more organized.

“Today has been a great opening weekend,” she said. “We had some great students to come out to help students and welcome new students to campus. Hopefully they’ll come back out (Saturday) and give us another great day.”

Memphis resident Rodney Gray, wearing a red shirt, is joined by his wife, Judi Gray, center, and their children, son Hayden and daughter Hannah, to help move the belongings of their oldest daughter, MTSU freshman Haley Gray (not shown), into Corlew Hall on Aug. 23. (MTSU photo by News and Media Relations)