‘Immigrants and Refugees’ are .. 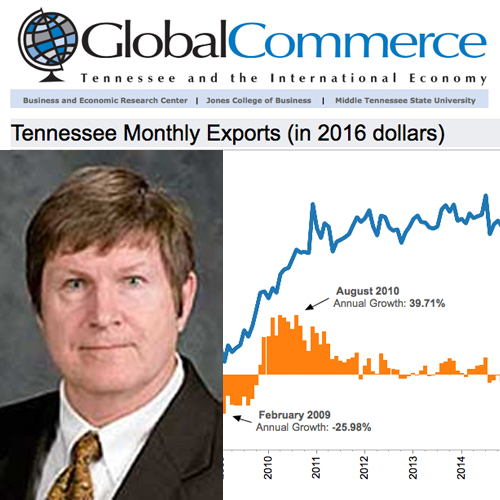 Using the recently released U.S. Commerce Department 2014 exporter database, which includes the location of every American firm that exported during that year, report author Steven Livingston was able to determine that just under 3,000 Tennessee manufacturers exported in 2014. That number increased by 64 firms from 2013.

“One can argue manufacturing firms are particularly important for assessing the export performance of a region or locale,” said Livingston, a political science professor and editor of “Global Commerce.”

For the second quarter of 2016, the top two zip codes in Tennessee for export manufacturers were southeast Memphis and La Vergne, and the top two export sectors were medical equipment and auto supplies.

About 40 percent of all Tennessee exporters are manufacturers, which is actually significantly higher than for the U.S. generally, noted Livingston. Nationally only about a quarter of exporting firms are manufacturers. This is another sign that the state economy is unusually “invested” in manufacturing, he stated.

For more information about the report, contact Livingston at 615-898-2720 or email steven.livingston@mtsu.edu.

For more information about the MTSU Business and Economic Research in the Jones College of Business, visit www.mtsu.edu/berc.