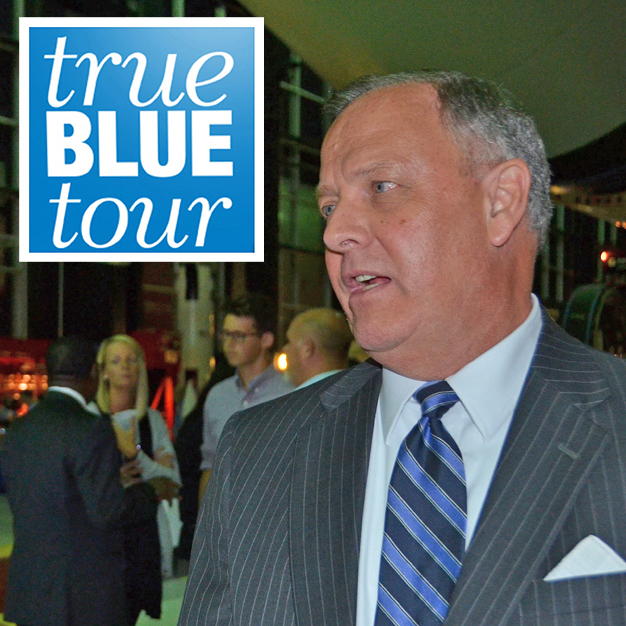 This is a story about the past and the present; it’s about words, constructive criticism, business cards and about a former MTSU student and a retired faculty member whose advice steered the pupil to an award-winning, 36-year (and counting) career in broadcasting.

How’s that for an introduction to an amazing (at least for me and several others) story that began at the MTSU True Blue Tour in Huntsville, Alabama, and ended with lunch with a friend and a friend of a friend the next day at the Raider Zone in the James Union Building.

For starters, the True Blue Tour is an event where we take MTSU on the road to seven major cities in Tennessee and also to Huntsville, Atlanta and Bowling Green and Louisville, Kentucky. MTSU administrators, admissions recruiters and staff, academic advisers and others recruit top students across the South at the student receptions.

I am there in a reporter/photo journalist/media relations capacity to invite local newspapers and television stations to cover our event and then to document it for www.mtsunews.com.

Working in the quiet confines of an office provided to me on the first floor of the U.S. Space & Rocket Center around 7:30 p.m., I hurriedly was wrapping up the prepping of digital photos and captions to send them out to media outlets in Alabama.

My cellphone rings. Andrew Oppmann, vice president of marketing and communications at MTSU, informs me that “a local news anchor” was asking for me. I knew three broadcasting alumni from our College of Media and Entertainment had paid a visit either at lunch or earlier that evening.

Once I reached the second-floor stage area, Andrew stood with a man I did not recognize. But when I was introduced to Jerry Hayes of WHNT-TV — News 19, the CBS affiliate in Huntsville — I recalled 2015 alumnus Chris Davis mentioning Mr. Hayes following lunch. Chris talked about how Jerry had been there 36 years and is an institution in North Alabama.

Andrew wanted to make sure our guest would spend time with MTSU President Sidney A. McPhee.

The combination of Andrew, Alumni Relations’ Paul Wydra and myself waited patiently 30 minutes as four or five small groups of people spent time with the president.

While waiting, Jerry reflected on his years at MTSU, mentioning legendary track and field coach Dean Hayes, Chris Clark (41-year veteran WTVF NewsChannel5 news anchor who now teaches at MTSU), the dorm he once lived in while a student that was leveled to help make way for a new Science Building in 2014), former university photographer Jack Ross, some “God moments” that involved his immediate family and Dr. Ralph Hillman, a professor and longtime (1974-2002) faculty member.

“Dr. Hillman told me I was never going to make it in broadcasting,” Jerry Hayes recalled. “I told him that I didn’t understand because I was making B’s in his class.

“Knowing I wanted to be a broadcaster and anchor, he told me I needed to change the way I talked,” said Hayes, who had but one business card that I snapped up before Paul could take it.

“I was also working at (radio station) WMOT on campus and I don’t know if he had ever listened to me on air, but one day after class, he pulled me aside,” Hayes added. “He smiled and said, “You’re not going to make it in broadcasting unless you lose that southern accent and change the way you sound. He said I sounded like I had fallen off a hay wagon.”

Andrew, Paul or maybe Jerry said they wondered whatever happened to Hillman and if he was still around.

Once on the bus ride back to Murfreesboro, my mind diverted to photos and captions and away from Jerry Hayes.

Sixteen hours later, I join friend Charlie Gregory, the Campus Recreation Center director, for lunch. Having paid and then selected my food, I made my way toward Charlie, who says, “Ralph and I are sitting over there,” as he points to a table.

I began eating. I knew I had eaten one other time with Charlie and his friend, but I did not recall his name. I told them about a joyful blessing from earlier that day, then began talking about the True Blue Tour trip to Huntsville.

For whatever reason, my story started focusing on the gentleman wearing the suit and tie and 36-year broadcasting veteran in Huntsville who talked about his days as an MTSU student. They heard my version of the faculty member who was going to fail his student.

The man to my left started talking about a student he had 36 years ago who wanted to break into broadcasting. The more he talked, the more I thought he was talking about Hayes.

I turned and said, “Ralph, what is your last name?

Charlie said I nearly fell out of the chair in disbelief.

I pulled out Jerry Hayes’ business card. Ralph Hillman gave me his. I immediately called the number to reach Jerry at his desk and left a voice mail. Then I called the station’s news desk and left my name and number.

About 10 minutes later, my phone rang. It was Jerry. After exchanging greetings, I said, “I want to hand the phone to someone who wants to talk to you.” They immediately reconnected and spent about 10 minutes or so on the phone.

“You made my year,” Hayes said to Hillman near the end of their conversation.

In an email response, Hayes said, “I believe it was one of those God moments. My intention that night was to stop by and say hello to President McPhee and congratulate him on what he has been able to do with his team at the university.”

“It (MTSU) is so much bigger and better than when I was there and as an alumni, I’m extremely proud of the direction the university is heading,” he added. “When I left, I thought to myself, I hope I didn’t talk too much about myself. But I realize now that if I hadn’t, you would have not known about Dr. Hillman and the influence he had on my life and career. So, yes, I think there may have been a little divine intervention there.”

“Had Ralph Hillman never taken the time to have that conversation with me, as I’m sure he has done with other students, my career wouldn’t have lasted as long as it has,” Hayes added. “That little bit of caring advice changed my life.”

It was both humbling and gratifying to be in the right place at the right time, to listen and make mental notes, to go to lunch the next day and not pass on the opportunity because I was too busy.

I suspect there are many Ralph Hillman stories to be told. And not just him, but other MTSU faculty and administrators who impacted students’ lives for the better.

Randy Weiler is a content specialist in the MTSU Office of News and Media Relations. He is traveling with MTSU staff on this year’s True Blue Tour. Reach him at Randy.Weiler@mtsu.edu.