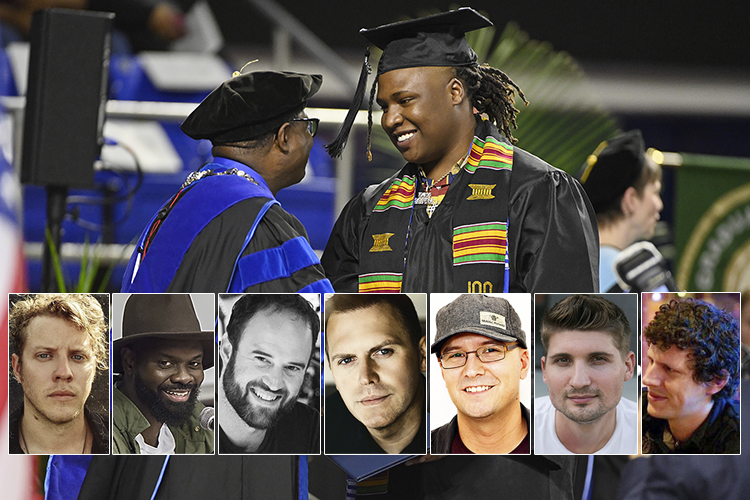 MTSU will be making noise again at the upcoming 61st annual Grammy Awards, this time with nine university alumni contributing to rap, pop, Americana, country and gospel projects, including the first student ever to be a part of the distinguished list while enrolled at the university.

Only songwriters and artists get public credit for song-nominee Grammys, but industry folks — and music lovers who study the details of their favorite tracks — know who else makes the music pop. Scott’s “SICKO MODE” lyrics, in fact, could speak directly to Chambers’ production talent when Scott sings “Who put this together? I’m the glue.”

Chambers’ fellow honorees this year include:

• 2010 audio production grad Michael Anderson, known professionally as Anderson East, who was nominated in the “Best American Roots Performance” category for his song “All on My Mind.”

• Daniel Rowland, a 2008 Master of Fine Arts in Recording Arts and Technologies Program alumnus and an adjunct recording industry professor, who served as mastering engineer on multi-Grammy winner Seal’s 2017 collection of pop classics, “Standards.” The project is nominated in the best traditional pop vocal album category.

• F. Reid Shippen, a 1994 recording industry management graduate and 2017 inductee into the College of Media and Entertainment‘s “Wall of Fame,” who was one of the mixing engineers for Kelsea Ballerini’s “Unapologetically” project, which also was nominated for best country album.

“I learned so much academically and personally while being here at MTSU,” Chambers said shortly before he received his bachelor’s degree from the University College.

“I enjoyed my four years here, and I appreciate all of the support I received from the community while in school.”

The Memphis native, who began creating music with the “Rock Band” video game when he was 13 or 14 years old, worked with popular Memphis rappers Yo Gotti, Blac Youngsta and Moneybagg Yo to begin making his name in the Memphis music scene. He deejayed for First Flight Entertainment during his MTSU years and made more connections in the industry while sending beats back home to his childhood friend, rapper BlocBoy JB, to create new tracks.

In his senior year alone, besides Scott’s double-platinum “SICKO MODE,” Chambers produced nearly a dozen hot tracks for both renowned artists and newcomers, including BlocBoy JB’s triple-platinum “Look Alive”; Drake’s “Nonstop,” which peaked at No. 2 on the Billboard charts; Lil Wayne’s “Hasta La Vista”; and Eminem’s “Not Alike.” 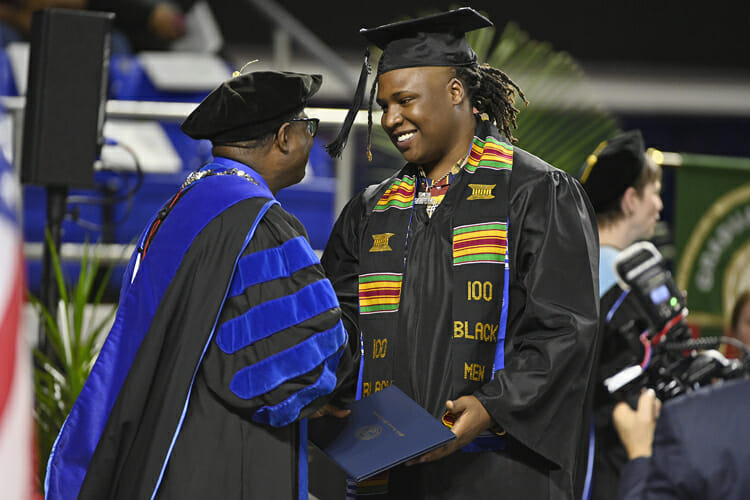 “I’ve put in thousands of hours, worked with hundreds of artists, linked up with so many producers, gone through so many laptops,” Chambers told DJBooth.net this fall. “It’s really about the work you put in and what you’re willing to sacrifice.

“… When I made music at home, I didn’t have anything but a laptop and headphones. In the studio nowadays, you don’t need a board or anything; you just need a laptop and speakers. There’s really no difference; you can just feel the beat better in the studio. You have nicer equipment in a real studio.”

Chambers, 22, has already launched his own production label, Drumatized, and they’ve signed an up-and-coming Memphis producer, Denaro Love, to expand the empire. You can hear Chambers’ work in the official “SICKO MODE” video below.

Beverly Keel, chair of MTSU’s Department of Recording Industry, commended Chambers for finishing his degree in the face of “what must have been incredible temptations to leave school.”

“This shows that he has what it takes to handle the ups and downs of the uncertain music business,” she said of Chambers. “He has his head on straight and his priorities in order. In a society of short-term fame and instant gratification, he proves that he is a man of great substance who is in it for the long haul.

“… Now when he looks back, he won’t have any regrets or doubts. This MTSU education is something that he can rely on for the rest of his life, personally and professionally.”

He’s also engineered projects for a list of artists that includes Brandi Carlile, Carrie Underwood, The Head and the Heart, and Cage the Elephant.

Producer Jay Joyce, with whom Hall’s worked on dozens of successful albums, recorded The Brothers Osborne album in 2017 in his Florida Panhandle beach house, more than a year before Hurricane Michael destroyed most of Mexico Beach and its neighbors, including the little bay town of Port St. Joe that gave the album its name.

The artists and crew have joked about working with six men and piles of audio equipment “packed” into a small home for two weeks, saying it was like recording in a garage but gave them the unique sound they wanted.

Anderson, a native of Athens, Alabama, who now lives in Nashville, has been writing music since high school and first made his living in Nashville as a session musician and recording engineer. He self-released two albums and an EP before making his major-label debut album in 2015, “Delilah.”

He had a song included on the “Fifty Shades Darker” movie soundtrack and co-wrote two songs for Miranda Lambert’s “The Weight of These Wings” album in 2016.

The 2018 Americana Music Honors and Awards included Anderson as an emerging artist of the year nominee this fall after the January release of his second album, “Encore.” His Grammy-nominated song is part of that project.

Esmond first gained recognition for his production work on the single “Work Hard, Play Hard” by the artist Yo Gotti in 2005. He won the 2012 Grammy for best gospel album as executive producer for former MTSU student Lecrae Moore’s album “Gravity” and the 2014 best contemporary Christian music song as a co-writer for Moore’s “Messengers.”

He co-wrote nearly half the songs on “Gravity” and also served as executive producer on Moore’s 2013 “Church Clothes, Vol. 2″ release. Esmond was a co-writer on albums by Andy Mineo and Derek Minor and contributed to Keyshia Cole’s 2008 best contemporary R&B album Grammy nominee, “Just Like You.”

Esmond, who’s now based in Atlanta, formed a production company, Track or Die, in 2014 and has produced for Meek Mill, Don Trip, Starlito, David Banner, Dave East, and Grammy-nominated rapper 2 Chainz. In 2015, he established the “Street Symphony Scholarship” for MTSU recording industry students.

Musgraves’ 2018 album, “Golden Hour,” which featured Laird’s two co-written cuts, won the Country Music Association’s top album award earlier this year and is nominated for Grammys in both the album of the year and best country album categories.

Laird, who also lives in Nashville, co-produced Musgraves’ first two albums, including her Grammy-winning debut, “Same Trailer Different Park,” and has so far co-written 23 No. 1 singles with a list of artists that includes Tim McGraw, Blake Shelton and Underwood.

He’s been nominated for three previous best country song Grammys, including McGraw’s “Diamond Rings and Old Barstools,” Kenny Chesney’s “American Kids” and Church’s “Give Me Back My Hometown.”

Haun’s Grammy experience this year may be less stressful than last, since he’s competing against four other gospel projects instead of himself. The Nashville resident produced three of the five best roots gospel album nominees for the 60th annual Grammys; this year’s nod brings his current career Grammy nominations to eight.

Haun’s also a 31-time Gospel Music Association/Dove Award winner and three-time BMI Music Award Winner. Like many of the albums he’s produced, he co-wrote most of the songs, including the title track, on this latest award-nominated collection.

He was a member of a nationally recognized audio team during his senior year at MTSU that earned the university its second consecutive grand-prize win in Shure Incorporated’s U.S. “Fantastic Scholastic Recording Competition.”

He’s a senior audio engineer at LANDR, a Toronto-headquartered online automated mastering service, and has worked on projects with artists ranging from Nine Inch Nails, Panic at the Disco and Lady Gaga to Wiz Khalifa, Pharrell and Vanessa Hudgens. His ongoing tour and studio work with music virtuoso Adrian Belew has already led to creating the acclaimed score for an Oscar-winning animated short film, “Piper.”

Shippen, a mixer, producer and engineer as well as an entrepreneur, consultant and business owner, has worked with artists ranging from Ingrid Michaelson, India.Arie and Sam Hunt to Gloria Gaynor, Eric Church and Steven Tyler.

He’s already earned Grammys in 2002 and 2007 for his engineering work on Cece Winans’ self-titled pop/contemporary gospel album and Jonny Lang’s 2006 rock gospel album, “Turn Around,” respectively, and he’s had a mixing hand in five other Grammy-winning releases. Shippen’s served as co-chair of the National Academy of Recording Arts and Sciences’ Producers & Engineers Wing and owns and mixes projects at Robot Lemon in Nashville.

MTSU alumni, former or current students, and faculty from across the university have been a part of more than 60 Grammy Award nominations in the last decade. Seven have won Grammys so far, including four repeat recipients, in categories from classical to country to gospel.

University officials meet with alumni, too, and send students and faculty to backstage and pre-show Grammy events, providing experiential education opportunities alongside those at the annual CMA Awards, Bonnaroo Music and Arts Festival and the Academy of Country Music Awards telecast.

More details about the Grammys are available at http://Grammy.com, and a complete list of this year’s nominees is available here.