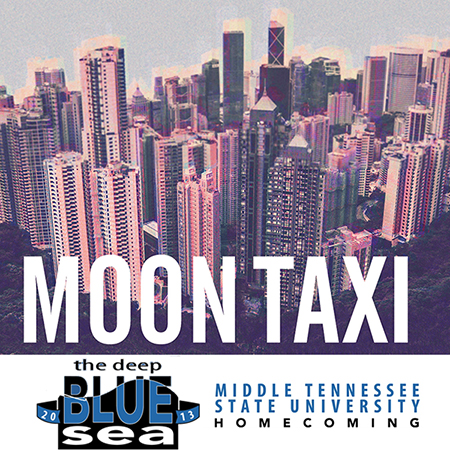 Nashville-based rock group Moon Taxi will headline a special homecoming concert with support from Space Capone and DJ KDSML in the MTSU Student Union Ballroom on Wednesday, Oct. 2, at 7 p.m.

Nashville’s Moon Taxi is headlining a special MTSU Homecoming concert Wednesday, Oct. 2, in the Student Union Ballroom. For ticket information, click on the poster above.

Doors for the show, which is being produced by Raider Entertainment, will open at 6:30 p.m.

Tickets are available now at www.mtsu.edu/events. Student tickets are $10, and general public admission is $15. Students may buy one guest ticket at the student rate and must accompany the guest to the door for verification.

Click on the graphic above for a printable Homecoming 2013 poster full of event details.

Vance Powell, who’s also worked with Jack White and The Dead Weather, mixed the new project. It was mastered by Greg Calbi, who has worked on projects by the Talking Heads, Paul Simon and Fleet Foxes.

“One thing we didn’t want to do was stray too far from what we did before,” Bailey said of “Mountains Beaches Cities.” “We really knew that things for the band had shifted in a good direction and we were growing because of our last record. We wanted to continue the energy we created from that record.”

The band, which was founded in 2006, has appeared at Bonnaroo, Forecastle and Lollapalooza and has opened for such artists as Matisyahu, Dr. John and Dirty Heads. Moon Taxi ended 2012 selling out multiple theaters on its own.

More information on the show, as well as the opening acts, is available at www.mtsu.edu/events and http://facebook.com/MTSUStudentProgramming. You can also call 615-898-2551 or stop by the Student Programming Office in Room 340 of the Student Union.