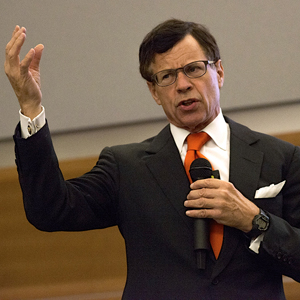 Though the unemployment rate still remains higher than pre-Great Recession levels in Rutherford and other Midstate counties, upward trends in job growth rates, housing permits and construction point to a stronger economic future for the region.

“It’s mostly good news,” said professor David Penn, director of the MTSU Business and Economic Research Center, during his presentation Friday at the annual MTSU Economic Outlook Conference inside the Student Union. “I really had to look for some bad news.”

Dr. David Penn, director of the Business and Economic Research Center at MTSU, gave a positive review of the Midstate economy during the annual MTSU Economic Outlook Conference held Friday, Sept. 27, in the Student Union. (MTSU photos by Darby Campbell)

Penn provided an exhaustive update at the half-day conference, showing statistics on statewide and Midstate economic indicators such as employment rates, income growth, sales tax collections, housing starts and manufacturing, to name a few. You can review Penn’s presentation online at www.mtsu.edu/berc.

Job growth is “booming” in the Midstate, Penn said, pointing out that Rutherford County ranked sixth nationally among the largest 334 U.S. counties for rate of overall job growth, with Williamson County ranking 15th. For private sector growth, the Nashville Metropolitan Statistical Area was tops in the nation among large metro areas.

Other positive trends for Middle Tennessee: housing construction is improving significantly; home price growth is positive; consumer spending is growing; and most sectors are adding jobs.

Regarding the unemployment rate’s slow improvement — 6.7 percent for the Nashville Metro Area in the second quarter, unchanged from a year earlier — Penn again pointed to a positive: More people are entering the job market seeking work. On a statewide level, most of the counties with the lowest jobless rates are located in the Midstate.

“If you want to know how the economy is improving, don’t look at the unemployment rate because that’s the last thing to come along,” Penn said.

Among the negatives cited by Penn were drops in employment within the financial and government sectors.

MTSU alumna Beverly George, who works for Pinnacle Financial in Murfreesboro, was attending the conference for the first time. George, who earned her bachelor’s and master’s degrees in business at MTSU, said she plans to come back and was pleased with the wealth of information shared during the presentations.

“It was a privilege to hear such distinguished speakers,” George said. “It was interesting to realize what a valuable resource we have in the Business and Economic Research Center right here at MTSU.”

Among the speakers was conference mainstay Donald Ratajczak, nationally known economist and regent’s professor of economics emeritus at Georgia State University who gave his insights on the national economy.

“If there is a disruption of financial institutions, and it’s blamed on one party, that party could see its relevance disappear very rapidly,” Ratajczak said.

Ratajczak said a disruption would likely affect still wary consumers negatively. He pointed to increased consumer spending for automobiles and home renovations as among the few bright spots within a national economy still growing slowly.

“Consumers are showing no willingness to spend anywhere else and that’s the problem,” he said.

Financial expert and author David Darst, managing director and chief investment strategist for Morgan Stanley Wealth Management in New York, wrapped up the conference with his perspective on the global economy.

Darst, a frequent guest on CNBC, Bloomberg, Fox, PBS and other television channels, said that “structural reform” was needed to create more jobs in today’s economy. With interest rates so low, people are sitting on trillions of dollars in cash rather than investing it.

Darst pointed to the importance that academia plays in creating new jobs, with the strong connections between professors and students helping to launch transformative companies such as Google.

“The end of the world as we know it is not the end of the world,” he said of the rapid changes in technology and economic models. “The United States is in inning three of a resurgence … a recovery, a renaissance like you cannot believe.”

The conference targets bankers, business owners and managers, community officials and leaders, business people, business and economics educators, students and others interested in the future economic growth of the region.

The Jennings A. Jones Chair of Excellence in Free Enterprise, the Weatherford Chair of Finance, and the MTSU Business and Economic Research Center co-sponsor the conference.