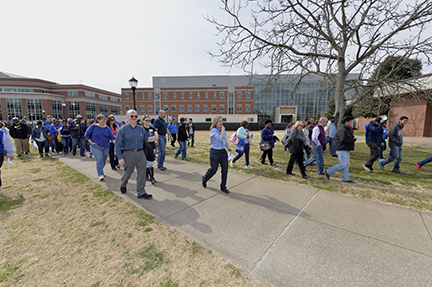 MTSU President Sidney A. McPhee and SSPU President Yu Tao signed a memorandum of understanding that will allow the universities to exchange students and faculty and develop joint research projects.

It is the third such agreement McPhee has signed in recent days during his delegation’s visit to China. It follows a new pact with Communication University of China in Beijing and a renewal of MTSU’s partnership with Hangzhou Normal University.

“We hope this agreement will lead to collaboration and cooperation between your engineering programs and our new mechatronics program,” McPhee said after touring SSPU’s laboratories. “There is much we could learn from each other.”

SSPU was founded in 1960 with an enrollment of about 20,000 students, said Vice President Zou Longfei. Engineering is its main discipline among its 31 undergraduate programs and it specializes in manufacturing of motor vehicles, aircraft and energy generation.

Click the image for more information about the university.

Yu said his university has cooperative agreements with institutions in Australia, Sweden, Great Britain, France and Thailand as well as 50 of the world’s top 500 business enterprises, including Siemens and Volkswagen.

McPhee noted MTSU’s and Tennessee’s connections to both Siemens and Volkswagen and expressed his hopes the universities could collaborate in joint studies and research to prepare students for work in such industries.

MTSU President Sidney A. McPhee, left, toured one of Shanghai Second Polytechnic University’s engineering laboratories during his visit Thursday to the Chinese university.

Rutherford County auto industry leaders Bridgestone, with a mechatronics facility at its La Vergne education center, and Nissan are among the partners in MTSU’s program.

Thursday’s ceremony at Shanghai was the fourth stop in McPhee’s latest visit to China. His delegation next travels to Changsha, Zhangjiajie and Xi’an.

Under McPhee’s watch, MTSU’s international student enrollment has increased from 396 to 789 in five years, and the university has 335 students in its education abroad programs this summer. It has more than 40 exchange agreements with institutions around the world.

Last May, MTSU signed a similar agreement with Shanghai Jiao Tong University, known as “China’s MIT,” that will also allow for the exchange of faculty and students between the institutions.

MTSU President Sidney A. McPhee entertained questions from students at Shanghai Second Polytechnic University after a Thursday lecture by McPhee about the American higher education system.

HANGZHOU, China — Middle Tennessee State University and Hangzhou Normal University on Monday extended its Confucius Institute partnership — and discussed an idea to expand it with the creation of a Chinese music and cultural center at MTSU.

MTSU President Sidney A. McPhee and HNU President Du Wei signed a second five-year pact between the two universities that allows MTSU’s successful Confucius Institute to continue its work with HNU to promote Chinese language, history and culture. It will bring at least $500,000 in grant funding to the Murfreesboro campus.

At the annual advisory board meeting held at one of Hangzhou’s three campuses in the city, the partners also discussed future plans, which may include a cultural and music center at MTSU that would be substantially funded through a separate grant from Confucius headquarters.

Plans for the center were first reported by China Daily on May 12 in a report on the speech by Madam Xu Lin, director-general of the worldwide Confucius organization, who delivered one of the spring commencement addresses at MTSU.

“The development of this center would be a vital and exciting project for both of our universities,” McPhee said. “It capitalizes upon several of our unique resources as well as the regional and international relationships we have developed.”

“Our vision for the center is to complement and expand the cultural services we are now offering through our Confucius Institute,” the president said. “We will promote music as a vital element in education and cultural understanding.”

Du, a violin player himself, said he has been enthusiastic about the idea ever since he learned about the proposal from McPhee in December. “If you need our support,” he said, “we will organize some people and resources.”

The universities have been asked to submit a final proposal for the center in July to Hanban, the worldwide headquarters for Confucius.

Officials from Middle Tennessee State University and Hangzhou Normal University meet Monday on HNU’s Cangqian campus in China to discuss future plans and objectives for the Confucius Institute on the Murfreesboro campus. The meeting was followed by a ceremony extending the partnership between the two universities for another five years.

Also, Du and McPhee pledged to work cooperatively to participate in the worldwide celebration of the 10th anniversary of the founding of the Confucius Institute in late September. “It’s another great opportunity to underscore the value of our partnership and affiliation,” McPhee said.

“We all appreciate our relationship, our partnership,” Du said of HNU’s ties to MTSU. “I think, for us, this is a very important moment in our history.”

Confucius Institute, named after the ancient Chinese philosopher Confucius, is sponsored by China’s Education Ministry to promote Chinese language, history and culture through tours, exchanges and university partnerships. There are more than 440 institutes in 120 countries.

The ceremony at Hangzhou was the second stop of McPhee’s latest visit to China, where he is expected to establish or renew MTSU’s ties with academic partners in Beijing, Hangzhou, Ningbo, Shanghai, Changsha, Zhangjiajie and Xi’an.

Also, on Friday, McPhee was asked to present leadership strategies and tactics to about 75 top and middle managers at Hanban in Beijing.

Under McPhee’s watch, MTSU’s international student enrollment has increased from 396 to 789 in five years, and the university has 335 students in its education abroad programs this summer. It has more than 40 exchange agreements with institutions around the world.

BEIJING — Middle Tennessee State University signed an agreement Thursday that will allow select juniors from China’s top communication university to complete their bachelor’s degree studies in Murfreesboro — and then earn a master’s degree from MTSU in one additional year.

The agreement, known as a “3+1+1 accelerated graduate program,” was signed by MTSU President Sidney A. McPhee and Su Zhiwu, president of Communication University of China, during brief ceremonies at the Beijing campus. Watch a video from the signing here: http://v.youku.com/v_show/id_XNzEyOTA1MzM2.html.

The pact aligns MTSU’s acclaimed College of Mass Communication, named by the Radio Television Digital News Association as one of the U.S.’s Top 20 programs, with the China Ministry of Education’s top-ranked institution for journalism, communication, film and television.

“This partnership plays to the strengths of both universities,” McPhee said. “It opens the door for wonderful collaborations between our students and faculty and provides an attractive option for CUC students wanting to earn a graduate degree in the U.S.”

McPhee said the real-world experience of the faculty is a big strength of MTSU’s college.

“We employ practitioners, former top-rated anchors and broadcasters and people in print and electronic media of different disciplines,” he said. “They help pave the way for students who need internships and practicums.”

The president also pointed out the college’s Center for Innovation in Media, which allows students to collaborate and develop content on multiple platforms, including the university’s two radio stations, student newspaper and student-run television news operation.

“It brings together all of the various media entities within the college,” McPhee said.

Communication University’s Su said he hopes the agreement will encourage collaboration between faculty at both institutions, such as a joint reporting or film project.

“We wish to cooperate in the area of communication between our professors,” he said.

Communication University of China, one of the top public universities in China, is known as “the cradle of China’s broadcasting and television talents.” Many of its graduates are in prominent reporting and media management roles. The Chinese Ministry of Education ranked it as the country’s No. 1 university for media education in 2012.

There are about 15,000 full-time CUC students, including more than 9,000 undergraduates and more than 3,500 candidates for doctoral and master’s degrees. It also has about 17,000 students in programs of continuing education.

Like MTSU, many members of CUC’s more than 1,100 faculty members have strong professional ties and media experience.

The agreement calls for MTSU and CUC to work together in establishing a curriculum to allow CUC students to complete their undergraduate studies while attending MTSU, McPhee said.

Both universities will work to identify graduate-level courses to allow CUC students to simultaneously pursue a master’s degree at MTSU.

“It is anticipated that CUC students will take a minimum of three years of courses here in Beijing, then come to Murfreesboro for the fourth year of their undergraduate education,” the MTSU president said.

The ceremony at CUC was the first stop of McPhee’s latest visit to China, where he is expected to establish or renew MTSU’s ties with academic partners in Beijing, Hangzhou, Ningbo, Shanghai, Changsha, Zhangjiajie and Xi’an.

MTSU’s international student enrollment has increased from 396 to 789 in five years, and the university has 335 students in its education abroad programs this summer. It has more than 40 exchange agreements with institutions around the world.