Alumni are 'Messengers' with G.. 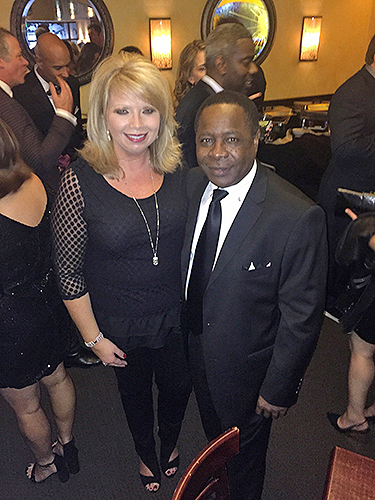 LOS ANGELES — MTSU teamed with Nashville-based Leadership Music on Sunday, Feb. 8, for a reception for Music City artists and recording executives just hours before the start of the Grammy Awards.

The event at Rock’N Fish Restaurant, outside Staples Center where the Grammys were later televised, capped two days of activities in the Los Angeles area by MTSU’s College of Mass Communication to underscore the national profile of its recording industry program.

In ceremonies before the prime-time broadcast, MTSU alumni Torrance “Street Symphony” Esmond and Lecrae Moore won a Grammy for Best Contemporary Christian Music Performance/Song as co-writers on the song “Messengers.” Moore, a Christian hip-hop artist, performed the song on his “Anomaly” album with fellow artists For King & Country.

MTSU President Sidney A. McPhee, along with College of Mass Communication Dean Ken Paulson and Beverly Keel, Department of Recording Industry chair, greeted Leadership Music alumni at the event. Many of the guests also were former MTSU students of the university. The annual leadership program brings together leaders within the music community to discuss issues currently affecting the music industry.

“Our partnership with Leadership Music is valuable in so many ways,” McPhee said. “It affords opportunities like this for our faculty and students to connect with Music City’s top executives and influencers.”

Paulson said the college’s presence in southern California sends a strong signal to those working in the music business.

“We deeply value our rich relationship with Leadership Music and its support for our students,” he said.

Leadership Music alumni come from all genres of music within both the creative and business segments of the industry as well partners from the nonprofit, business, educational or legislative communities. Paulson has served as a member of its board and executive committee, and Keel is a graduate, former board member and former secretary of the program.

“MTSU is a valued partner and friend and we appreciate its help in staging this great event before the Grammy Awards,” said Diane Pearson, president of Leadership Music and an executive with City National Bank. “It means a great deal to have the university’s leadership here today.”

Hood, a 1997 graduate, has served as head stage manager for more than 1,000 hours of network television specials, including Olympic opening and closing ceremonies, presidential inaugurals, the Kennedy Center Honors and Super Bowl halftime shows as well as most major entertainment awards ceremonies.

“We are proud of Garry and all of our alumni, faculty and friends who are connected to the music’s biggest event,” McPhee said.

You can read about MTSU’s Grammy winners and nominees here and about more special Grammy events here.