‘MTSU On the Record’ hits fast.. 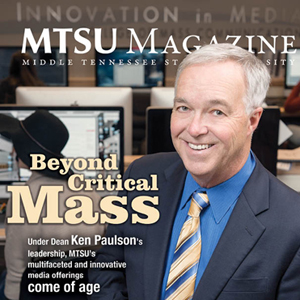 The winter 2015 edition of MTSU Magazine profiles, arguably, MTSU’s most recognizable college — the College of Mass Communication — at a time when its multifaceted and innovative media offerings are coming of age.

Mass Comm comprises a Department of Recording Industry that’s one of the best in the country, a Department of Electronic Media Communication whose students and state-of-the-art facilities have attracted national recognition, and a tradition-rich School of Journalism that houses the John Seigenthaler Chair of Excellence in First Amendment Studies.

Ken Paulson, dean of the College of Mass Communication, is shown on the cover of the January 2015 edition of MTSU Magazine. (Courtesy of MTSU Creative and Visual Services)

For Mass Comm to fulfill its potential, though, new dean Ken Paulson, who was hired in 2013, and who was on the team of young editors that launched USA Today in the 1980s, knew the College also needed retooling.

“All traditional media have been buffeted by digital technology, and that in turn has led to cutbacks and job losses,” Paulson says in the article. “But there will always be news. There will always be music. And film. And commercial art. And communication. Our challenge is to prepare our students for the new era of opportunities.”

“It’s not enough for us to just teach journalism, media, and production skills,” Paulson says. “We need to anticipate the future and help reinvent these industries.”

The article details efforts underway to make the college as contemporary, innovative and prominent as possible. That includes a strategic shift that will meld the college’s two aforementioned journalism programs — the School of Journalism’s traditional program, for print, and the Department of Electronic Media Communication’s multimedia program for practically everything else — into a single, vibrant, multiplatform program poised for roll out in the fall of 2015.

From a curriculum perspective, it’s a savvy shift in approach by the college that better reflects the media industry students will enter after graduation.

Dwight Brooks, director of the School of Journalism, says in the article that there will always be a need for trained journalists in a democracy.

“But we’ve got to prepare our students for the careers that are out there,” he says. “And they all involve being able to shoot video and write for the Internet, in addition to the traditional skills of reporting and writing. That’s the tricky thing: balancing.”

In addition, Paulson plans to expand the role of the Mass Comm’s nationally recognized Center for Innovation in Media as “a laboratory for change, anticipating where the media are going and how we can ensure that our students get there ahead of it.”

Readers may also download MTSU Magazine free for their iPads and Android devices. The MTSU Mag app, available in the iTunes store and now at Google Play, includes special multimedia content built into every issue that’s not available in the print editions.

Printed copies of MTSU Magazine are distributed twice annually to more than 105,000 alumni readers. The publication also is distributed to interested community members, including state lawmakers and members of the Tennessee Board of Regents.