‘MTSU On the Record’ peers int..

The summer 2019 edition of MTSU Magazine profiles the university’s wildly successful Adult Degree Completion Program, or ADCP, which applies the seasoned student’s knowledge and skills to degree requirements, making getting a bachelor’s degree as time- and cost-efficient as possible.

Arguably MTSU’s most prominent adult degree graduate is a member of its very governing body, Stephen Smith, who serves as chairman of the MTSU Board of Trustees. Smith’s unique story and journey to a degree serves as the cover story for the summer 2019 magazine. 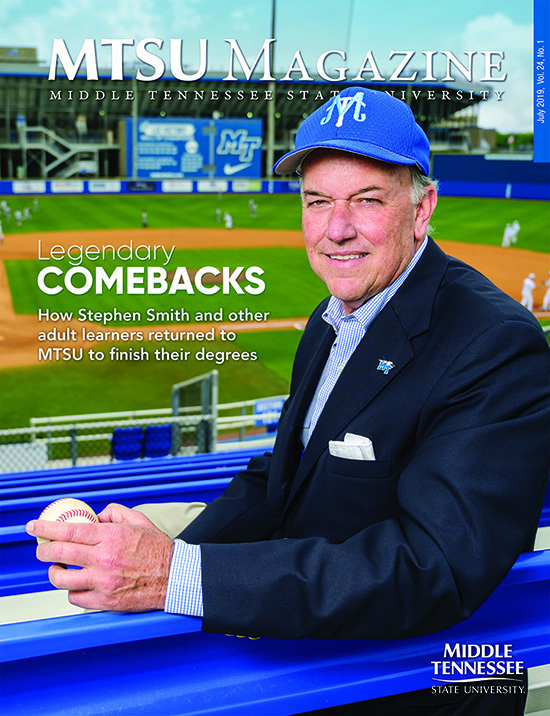 One of the primary motivations for the former Blue Raider pitcher to return to school and complete his degree was to set an example for MTSU’s student-athletes.

Like many of them, Smith dreamed of going pro during his playing days, even though the odds of making it to the next level were infinitesimal. He dropped out knowing he had another dream job lined up: a position working for his idol, his father, at Haury & Smith Contractors. But for most college athletes, their degree is their future.

“The only place my face was recognizable at school was at the athletic department, and we had hundreds of young people there,” Smith said. “My thought was that they would say, ‘If getting a degree is important to Mr. Smith, and he’s nearly 60 — to them I was an old man — maybe I’d better get mine.’”

Fewer than half of MTSU students are between 18 and 21, so accommodating adult students like Smith is part of the university’s mission. The ADCP offers a flexible path to a bachelor’s degree for people who are entering college later in life. Maybe they joined the military directly out of high school, or they earned an associate degree and want to go further. Or maybe they dropped out of college and regret it.

Through the ADCP, they can work toward any bachelor’s degree MTSU offers, although most people major in Professional Studies or Integrated Studies ­— general Bachelor of Science programs designed to make the most of prior college credits or work experience. Course credit for previous work and military learning experiences is awarded through a semester-long class called Prior Learning Assessment.

It’s not unusual to finish a degree in a year through the ADCP, although completion time varies depending on several factors, including the specific degree, prior college and prior learning credits, and course load. Students are encouraged to work at the best pace for them, choosing from online, traditional, and accelerated classes to fit college into their busy schedules.

In the decade since the ADCP launched at MTSU, word has gotten out about its value. Now at any given time, there are 1,000 to 1,200 adults enrolled in the program, making a comeback.

Articles from the magazine appear on MTSUNews.com and a digital flip-page version is available at http://bit.ly/mtmags19.