‘MTSU On the Record’ peers into researchers’ study...

Bacteria that have a speedy way of escaping battles with mammals’ immune systems were the focus of a recent “MTSU On the Record” radio program.

Host Gina Logue’s interview with Dr. Mary Farone of MTSU’s Department of Biology first aired July 30 on WMOT-FM Roots Radio 89.5 and online at www.wmot.org. You can listen to their conversation above.

In collaboration with scientists at Tennessee Technological University, Farone and 10 colleagues, including her husband, MTSU biology professor Anthony Farone, published a new article about their research in the academic journal BMC Microbiology in May.

The article is available here in a PDF.

It notes how two unique bacteria from a hot tub and a cooling tower in Cookeville, Tennessee, collected in 1999 and studied from 2003 to 2016, enter the nuclei of mammalian cells, replicate and divide. While this isn’t unusual behavior for viruses, Mary Farone said it hasn’t been seen before in bacteria.

Farone said the fact that the bacteria enter the cell nuclei directly mean that they can spread more quickly throughout the body, potentially speeding up the time in which infection can develop.

“It replicates to large numbers in that nucleus and, essentially, escapes any protective mechanisms the cell might have to defend itself, which it would typically do in its cytoplasm,” Farone said.

“So in a way, it’s escaping from where it’s in danger and using the nucleus to do its replication and dividing.”

In January, the researchers received funding from the National Institutes of Health to continue their search for more information about the bacteria.

The project began with an ecological study of amoebae and bacteria in natural versus human-constructed environments. Farone named the organisms “Candidatus Berkiella aquae” and “Candidatus Berkiella cookevillensis” in honor of her fellow researcher Berk and the location of the original discovery. 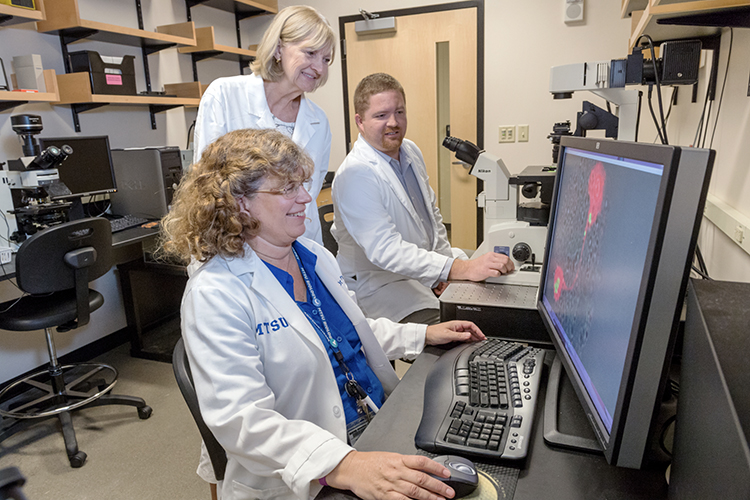 Dr. Mary Farone, seated in the foreground, Dr. Sharon Berk and MTSU doctoral candidate Brock Arivett view a graphic image, in this 2016 file photo, of the amoebae that are part of their nearly 20-year study with Tennessee Tech researchers finding bacteria in a hot tub and cooling towers in Cookeville, Tennessee. The two bacteria species, which were named for Berk, are capable of infecting cell nuclei. (MTSU file photo by J. Intintoli)