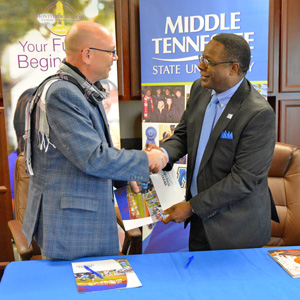 Montverde Headmaster Kasey Kesselring, left, and MTSU President Sidney A. McPhee shake hands Feb. 13 after signing a pact that will allow for dual enrollment of Montverde students, most likely through online classes by the university. (MTSU photos by Andrew Oppmann)

The pact, signed Feb. 13 by MTSU President Sidney A. McPhee and Montverde Headmaster Kasey Kesselring, will allow for dual enrollment of Montverde students, most likely through online classes by the university.

It will allow the academy’s guidance counselors and MTSU’s undergraduate and international studies recruiters to work collaboratively in placing best-fit students from Montverde on the Murfreesboro campus.

“We are thrilled to be able to sign this agreement and partnership between our schools today,” said Kesselring, who received his master’s degree from MTSU and is a former headmaster of The Webb School in Bell Buckle, Tennessee.

“We look forward to a long and productive relationship and we are super excited about the opportunity this is going to give our students,” he said.

The Academy educates nearly 1,100 students from pre-K through 12th grade. It serves more than 350 boarding students between seventh and 12th grades who hail from across the United States and 60 countries worldwide. It also has made recruitment in China a top priority, opening an educational center in Shanghai.

McPhee said the academy “produces some of the best and brightest young minds from across the nation and around the world.”

“I know that (Montverde) students and their parents will come to love and appreciate MTSU as they do this very fine academic institution,” he said.

MTSU President Sidney A. McPhee signs copies of his book of photographs of China after a Feb. 13 lecture at Montverde Academy in Florida.

McPhee met with juniors and seniors, including several students from China, before the signing ceremony. The president talked about programs and facilities at MTSU, including the recently opened, state-of-the-art, $147 million Science Building.

Thirty Montverde students have been accepted for admission to MTSU’s incoming fall class, including nine who were enrolled during Friday’s visit, said Dr. Deb Sells, vice president for student affairs and vice provost for enrollment services.

Two of those future MTSU students, seniors Gloria Katuka and Manuel Lopez, met with McPhee, Sells and Melinda Thomas, the university’s director of admissions, and asked them for insights about the Murfreesboro campus.

“We are looking forward to seeing both of you on campus this fall,” McPhee told the students.

Under McPhee’s watch, MTSU’s international student enrollment has increased from 396 to 789 in five years, and the university had 335 students in its education abroad programs this summer. It has more than 40 exchange agreements with institutions around the world.

MTSU President Sidney A. McPhee, left, meets with Montverde seniors Gloria Katuka and Manuel Lopez, who have been admitted into the university’s incoming class this fall. At right is Montverde Headmaster Kasey Kesselring.