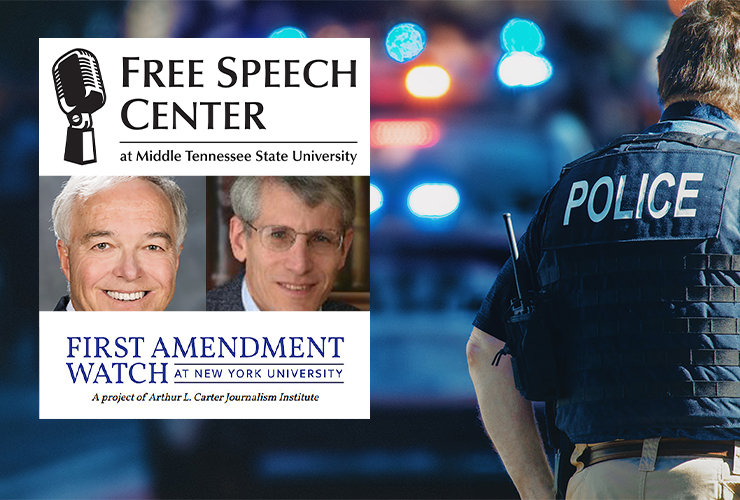 The first release from the Free Speech Center at Middle Tennessee State University and First Amendment Watch at New York University’s Arthur L. Carter Journalism Institute focuses on the rights of those who wish to photograph or shoot video of police officers in public places.

“‘Recording Police: Know Your Rights’ explains in a brief video that recording police officers in public is a First Amendment right, but also counsels citizens to keep back and not interfere with the work of police,” said Free Speech Center Director Ken Paulson. “It can be a delicate balance.”

The video was produced by Free Speech Center Director Steve Boyle, who has worked with Garth Brooks, the Beach Boys, Don McLean, Merle Haggard and dozens of other prominent musicians.

About the Free Speech Center

The Free Speech Center is a nonpartisan, nonprofit public policy center dedicated to building understanding of the five freedoms of the First Amendment through education, information and engagement. It does not participate in litigation or lobbying.

Its educational efforts include:

First Amendment Watch is a nonprofit news site and educational resource at New York University’s Arthur L. Carter Journalism Institute. Founded in 2017 by professor Stephen Solomon, First Amendment Watch documents threats to the First Amendment freedoms of speech, press, assembly, and petition, all rights that are critical to self-governance in a democratic society.

From Alex Jones’ defamation cases, to the use of social media by public figures, to the right to record police and the explosion of disinformation, we seek to inform the wider public on the legal bases of First Amendment cases in a way that is both analytical and accessible for journalists, educators, students and the public. In this way, First Amendment Watch provides all citizens with the tools to better understand their rights and freedoms.