Student Cyber Safety: Why and ..

MTSU President Sidney A. McPhee and Rockvale Principal Steve Luker, an MTSU alumnus, signed the agreement in the school library, with Rockets’ students, faculty and staff and MTSU staff and student teachers present. 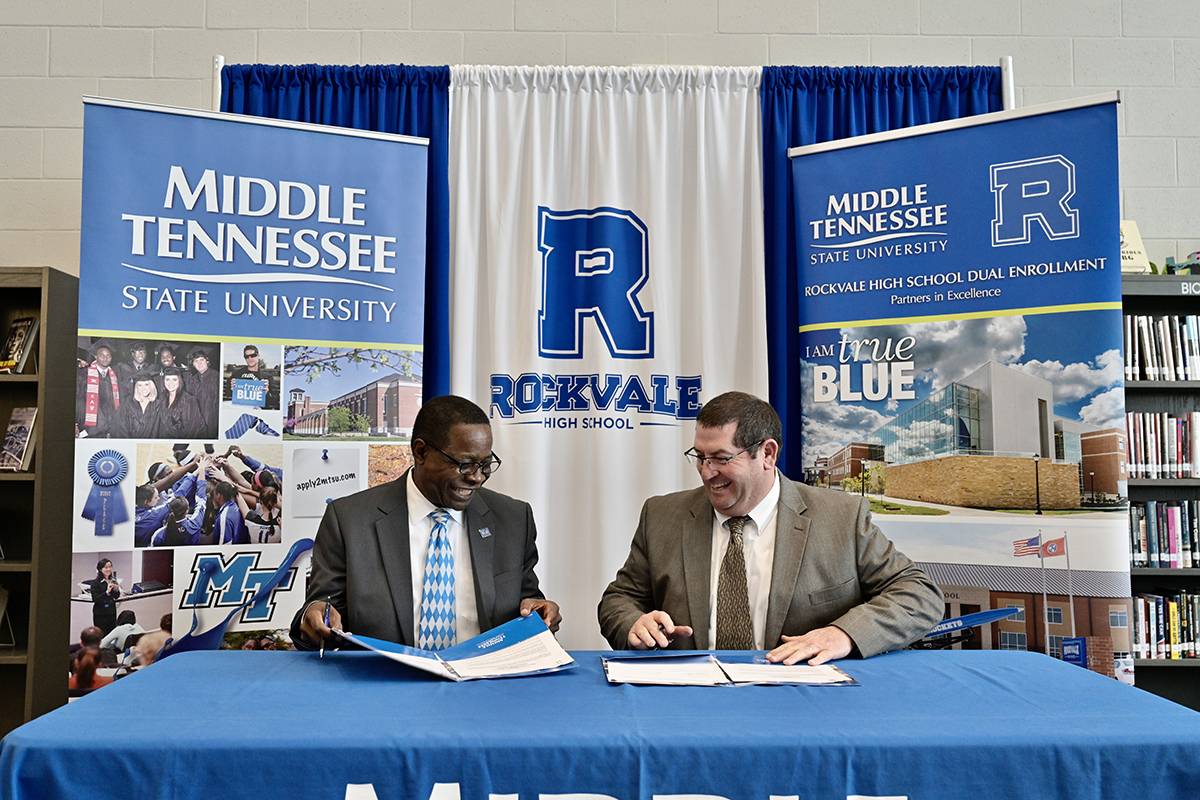 The dual enrollment partnership allows Rockvale students to enroll in MTSU courses taught on-site at their school or on the MTSU campus while they are still enrolled in their secondary school, and earn credit from both institutions. Dual enrollment falls under the MTSU University College.

“Keep stretching and challenging yourself,” Luker told nearly 40 dual enrollment students this semester at Rockvale, which has a Year 1 enrollment of 1,750 that will grow to 2,200 for the 2020-21 academic year. He and his staff met with MTSU officials a year ago to create “an early post-secondary opportunity for our students to get a head start on academically.”

McPhee told those assembled in the school library how he is so impressed with Rockvale’s dual enrollment program, what a beautiful school they have and how the faculty and administration “are doing a wonderful job of educating the best and brightest” at their school.” He was joined by Provost Mark Byrnes and Division of Student Affairs leaders at the event.

“You are a step ahead of your peers,” McPhee added. “This gives you a greater chance of success. … You will graduate early and be first in line to get top jobs.”

Luker and McPhee told the students about the variety of opportunities awaiting them at MTSU. Luker said they “can get a quality education and not leave this county.” 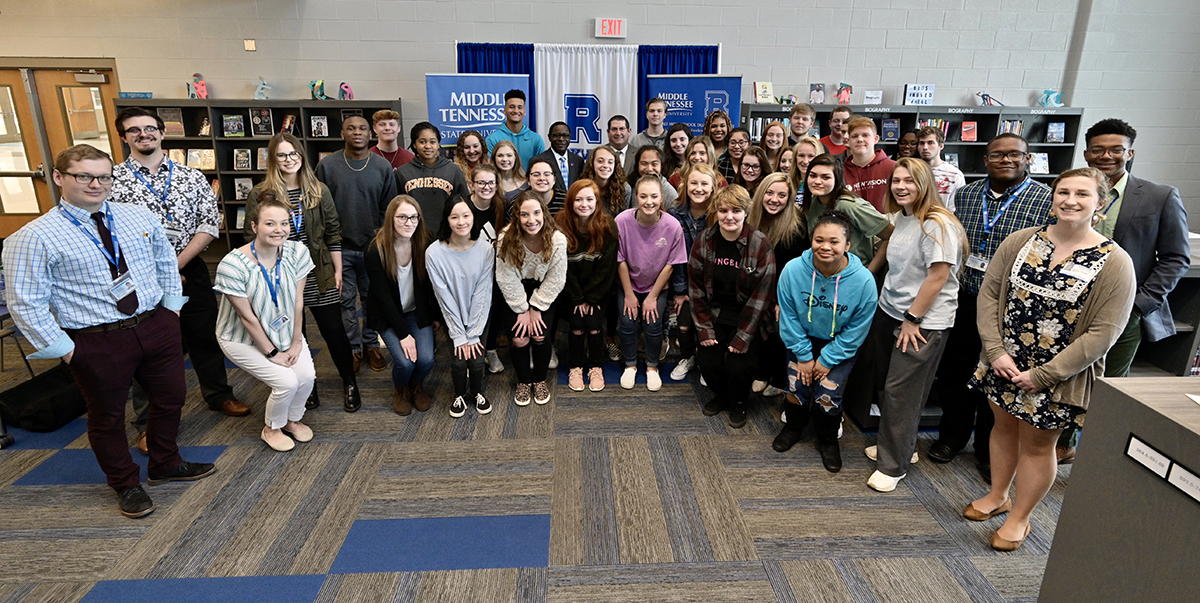 Rockvale-MTSU dual enrollment students Jaidyn Noel of Murfreesboro and Ethan Conrad of Rockvale are among those benefiting from the program. Both have been accepted to attend MTSU.

Noel, 17, who has a 4.0 GPA and 31 ACT qualifying her for a guaranteed Trustee Scholarship ($5,000 per year), has an A now in psychology and made an A in her algebra class last fall on the MTSU campus. “The (MTSU) professors make sure you get your work in on time and the campus is easy to navigate,” she said.

Conrad, 17, has been making A’s and B’s in psychology this semester and economics and speech classes he took in the fall. “I like the resources MTSU gives you,” he said. His mother, Heather Conrad, helps process military-centered students in the MTSU Charlie and Hazel Daniels Veterans and Military Family Center.

Rockvale students can take MTSU dual enrollment courses in economics, English, communications, history and math. Chemistry will be added in this fall. Forty-five students have registered to take the dual enrollment math course in the fall. 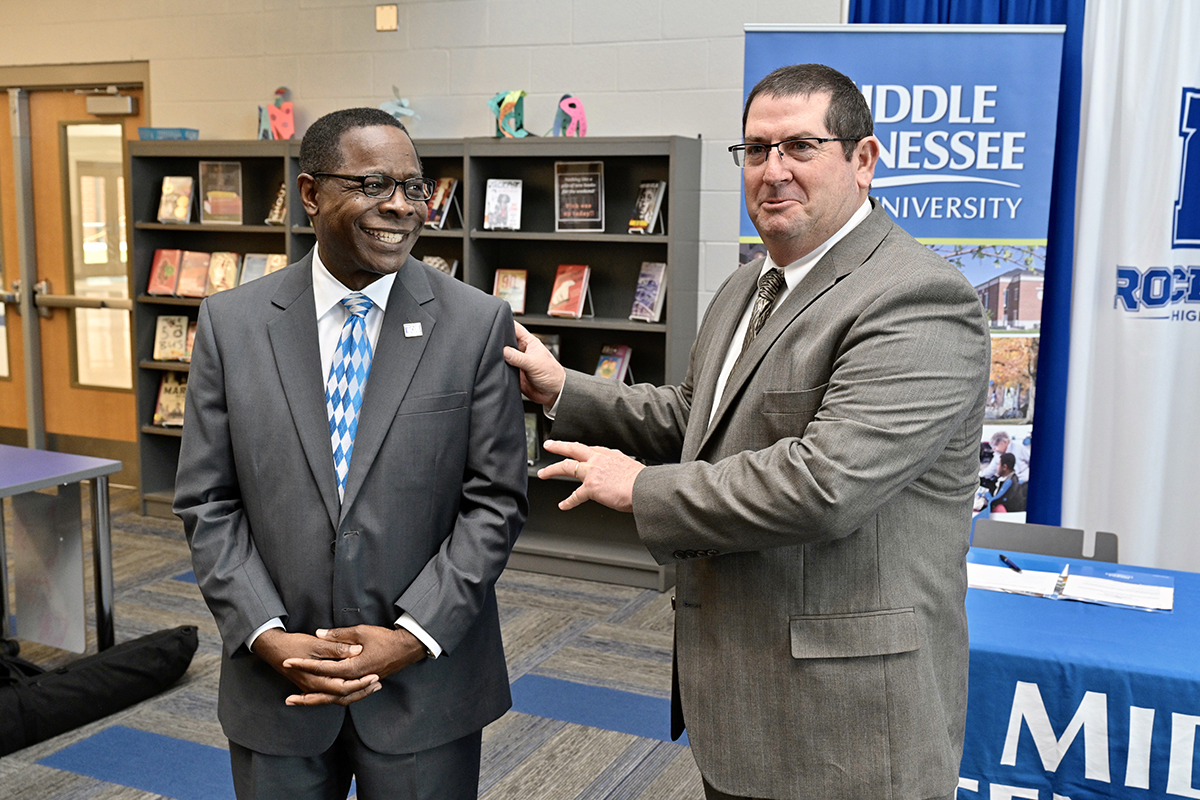 Rockvale High School Principal Steve Luker, right, tells a group of nearly 40 Rockvale students “they can get a quality education (from MTSU) and not have to leave this county” as MTSU President Sidney A. McPhee listens Thursday, March 5, during a partnership agreement signing announcement at the new school in Rockvale, Tenn.(MTSU photo by Andy Heidt) 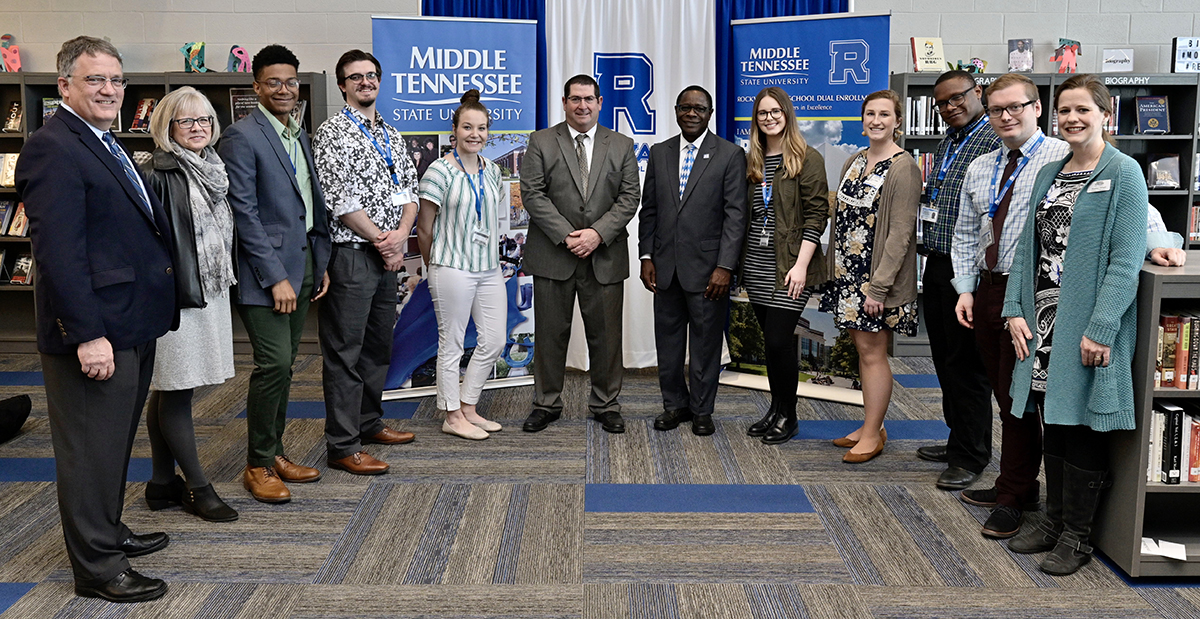