Learn why cows chew not only c..

(Updated 5:20 p.m. March 13: Due to coronavirus concerns and subsequent University precautions, the remainder of National Women’s History Month events have been canceled.)

It was no coincidence that MTSU’s National Women’s History Month Committee kicked off its annual celebration on the day of the Super Tuesday presidential primaries.

In connection with the March-long theme of “Nevertheless She Persisted: Valiant Women of the Vote,” the committee screened “By One Vote: Woman Suffrage in the South,” a documentary about events leading up to passage of the 19th Amendment to the U.S. Constitution, at the opening ceremony March 3 in the James Union Building.

Nashville Public Television Producer Emerita Beth Curley, the driving force behind the film, said it was not enough to focus on the all-male Tennessee General Assembly’s approval of the amendment on Aug. 18, 1920. 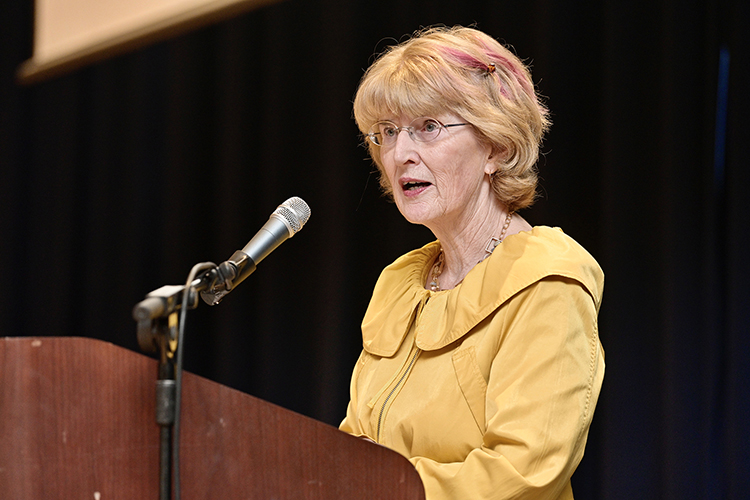 Nashville Public Television Producer Emerita Beth Curley introduces the NPT documentary “By One Vote: Woman Suffrage in the South,” which was shown for only the second time at the MTSU National Women’s History Month opening ceremony March 3 in the James Union Building. (MTSU photo by Andy Heidt)

“We fairly soon realized we needed to talk about the context in which these political events were happening,” Curley said. “What were the forces in society that propelled the pro- and the anti-suffragists?”

“Students on the campus of MTSU cannot use their student IDs to vote,” said Linda Wynn, a professor at Fisk University. “(But) if someone goes and purchases a permit for a gun, they can use that to vote.”

A bill to allow voting on campuses is pending in the Tennessee General Assembly. It would require county election commissions to designate public institutions of higher education with 8,000 or more enrolled students as polling places. 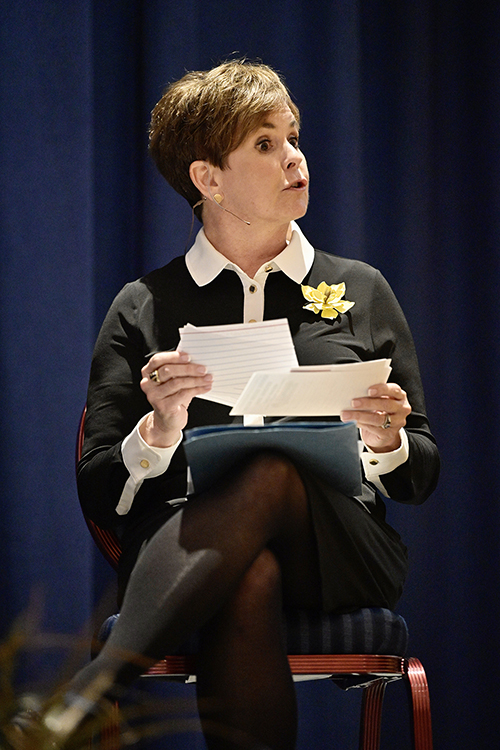 It was a member of the General Assembly who cast the vote that put Tennessee and the 19th Amendment over the top.

Rep. Harry Burn, a Republican from McMinn County and the youngest member of the legislature at 24, cast the deciding vote after receiving a letter from his mother urging him to support the amendment.

One panelist compared Burn to a current member of the U.S. Senate who faced a similar moral dilemma during the impeachment trial of President Donald Trump.

“In a way, … Mitt Romney was the Harry Burn of his day with the same set of worries,” said longtime broadcast journalist and executive producer of the new Nashville Banner Demetria Kalodimos. “Do I go with my conscience? Do I go with my party?”

Romney was the only Senate Republican to vote to find Trump guilty of abuse of power in the Feb. 12 trial, calling it “the most difficult decision I have ever had to make in my life.”

Panelist Mary Makley, an independent producer/editor who worked with Curley on “By One Vote,” also blamed the media for stoking societal and political divisions.

She encouraged the audience to “try to ignore all that heated tribalism that maybe gets eyeballs to watch television, which gets the commercials costing more and the networks making more money.”

The NWHM Committee also honored four members of the MTSU community for their “trailblazing” activities on behalf of women: 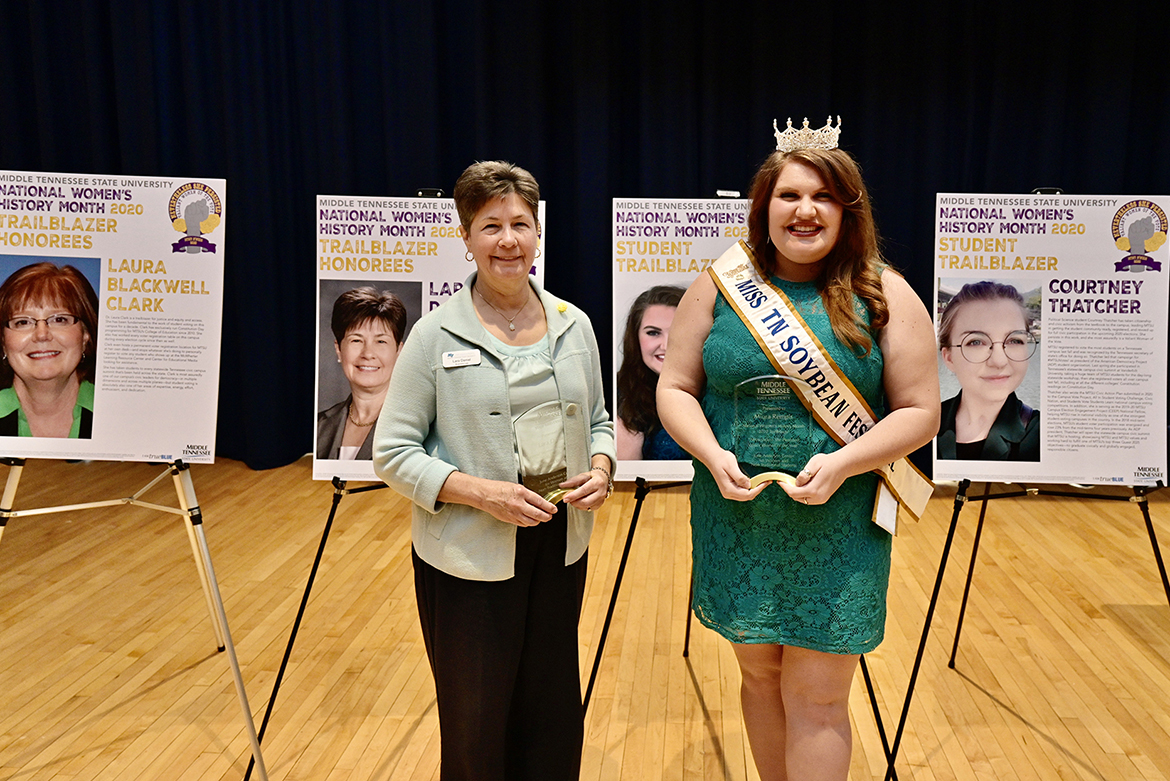 Two of the four campus community members chosen by the MTSU National Women’s History Month Committee for “trailblazer” awards pause for a photo. Dr. Lara Daniel, left, a professor in the Jones College of Business, and Miura Rempis, a junior political science major, show their awards at the March 3 opening ceremony. Not pictured are Laura Blackwell Clark and Courtney Thatcher. (MTSU photo by Andy Heidt)

Organizers unveiled three buttons honoring activist women to be available on campus throughout the month of March:

For more information, contact Maigan Wipfli, director of the June Anderson Center for Women and Nontraditional Students, at 615-898-2193 or Maigan.Wipfli@mtsu.edu.