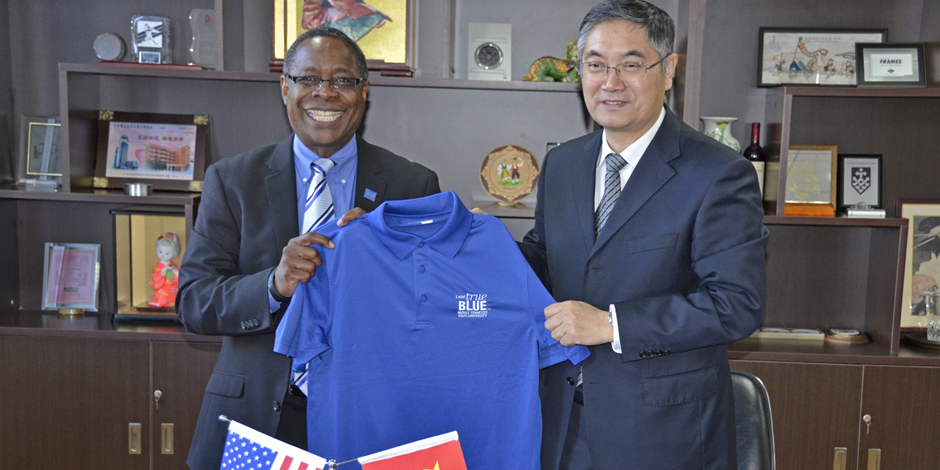 BEIJING — MTSU President Sidney A. McPhee signed an academic exchange agreement with North China University of Technology that will allow the two institutions to exchange students and forge other academic ties.

Officials look on as MTSU President Sidney A. McPhee and Wang Xiaochun, president of North China University of Technology, sign an academic cooperation pact between the two institutions. (MTSU photos by Andrew Oppmann)

The agreement came as McPhee wrapped up his most recent visit to China on Tuesday. Earlier in the trip, he was honored by the global organization of Confucius Institutes for MTSU’s work to strengthen educational and cultural ties between China and the U.S.

The pact by McPhee and NCUT President Wang Xiaochun focuses first on actuary sciences in the College of Basic and Applied Sciences, but allows for expansion in other academic areas.

“In addition, our students also want to have study-abroad experiences,” he said.

NCUT, located on the western side of Beijing, is a multidisciplinary university that combines the natural sciences and engineering with liberal arts, economics, management and law.

In 1978, with the approval of the State Council, NCUT began to offer full undergraduate degree programs. In 1985, it was renamed as the North China University of Technology.

Founded in 1946, the university includes eight colleges with an enrollment of more than 10,200 undergraduate students, 1,500 graduate students, 200 international students and 2,400 students studying at the College of Continuing Education.

NCUT is also active internationally through more than 30 cooperative partnerships and exchanges. It has established partnerships with universities in the U.S., Japan, Germany, Great Britain, France, Australia, New Zealand and elsewhere.