Special performances of ‘The N.. 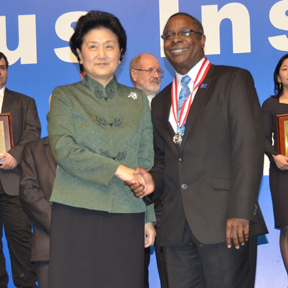 BEIJING — MTSU President Sidney A. McPhee received “Person of the Year” honors from the global organization of Confucius Institutes Saturday in recognition of the university’s work to strengthen educational and cultural ties between China and the United States.

At the invitation of Xu Lin, vice minister and director-general of the Confucius Institutes, McPhee also delivered remarks during the opening session of the conference. (Watch a video of some of his remarks here.)

McPhee was among 30 university presidents or heads of Confucius Institutes to receive the Individual Performance Excellence Award from Hanban, the organization’s headquarters, which oversees more than 400 institutes worldwide.

“This honor is really for the fantastic work by MTSU’s Confucius Institute to broaden the international scope and reach of our campus,” McPhee said. “I am pleased to accept this recognition on behalf of our university’s efforts.”

MTSU joined with China’s Hangzhou Normal University to open its institute in 2010.

McPhee told delegates at Saturday’s opening session that he believes “institutions of higher education are obligated to prepare our students for global competency.”

Key to this, he said, is to teach “international understanding and respect of the culture of other people.”

“The relationship between China, the United States, Asia and other parts of the world is most crucial for economic progress, world peace and stability,” he said.

McPhee noted that MTSU has “aggressively sought to keep our institute very visible both at the university level and in our community.

“It is our intent is to have language programs and cultural activities be a significant part of the university curriculum, the community and our outreach efforts to K-12 public schools.”

China Agricultural University in Beijing named McPhee as an honorary professor, its highest academic award, in May 2007. He was appointed in October 2010 as senior adviser to Hanban, and a book of his photographic essays, “China: Through the Eyes of An American University President,” was published in July 2012 and was released internationally.