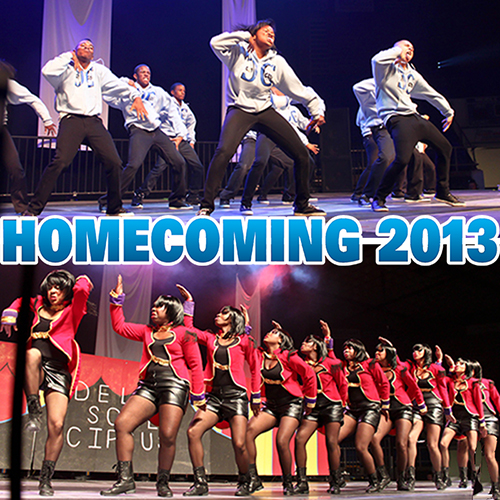 A brilliant flurry of feet and masterful showmanship await the audience at the 33rd annual National Panhellenic Council Step Show.

The event, which is part of MTSU’s Homecoming 2013 celebration, is slated for 7 p.m. Friday, Oct. 4, in the Murphy Center.

Click on the graphic above for a printable Homecoming 2013 poster full of event details, including the National Panhellenic Council Step Show in Murphy Center Oct 4.

“We’ve been working on the show since May with committee meetings and fixing things,” said Juanetta Dobbins, step show co-chair. “It’s been kind of hectic, but it’s still fun to do.”

Each team’s performance must contain a video of up to three minutes in length, run no longer than 13 minutes and be free of cursing and sexual innuendo.

Teams will be judged on precision, vocal synchronization, choreography and other qualities. Each team is responsible for its own music, props and costumes and for explaining lighting cues to production staffers.

“I’m a recording industry major, but I changed my focus from artist management to event production because of my work with this year’s step show,” said Carson Helton, step show co-chair and a junior from Louisville, Ky.

“I’m a public relations major, and I hope to go into event planning,” added Dobbins, a senior from Nashville.

The team selected “best overall” will receive $1,500. Monetary awards will be funneled back into the organizations.

In addition to the student teams, two other dance crews, Krazi Technique and Cat Cru Choreography, will perform. A mini-fashion show featuring the work of New York designer and MTSU alumna Robin Davis also will be part of the evening’s entertainment.

Alondra Hunt, a 2011 MTSU graduate, will be master of ceremonies. The audience also will be treated to the comedy of radio personality Zach Boog from WUBT-FM 101.1.

To obtain tickets in advance, go to Gate 1A of Floyd Stadium from 8 a.m. to 5:30 p.m. Monday through Friday.

For more information, contact Dobbins and Helton at mtstepshow@gmail.com.

Delta Sigma Theta’s step show team struts its stuff at the 2011 National Panhellenic Council Step Show at MTSU. The ladies will be among teams representing two MTSU sororities and two fraternities at the 2013 event in Murphy Center Oct. 4. (photo submitted)

Members of Cat Cru Choreography show off their dance moves at the 2011 National Panhellenic Council Step Show at MTSU. Cat Cru is one of two dance teams set for special performances at the Oct. 4 step show. (photo submitted)