MTSU Student Veteran Shares ‘Afghanistan: Through the Eyes of a Soldier’ (VIDEO) 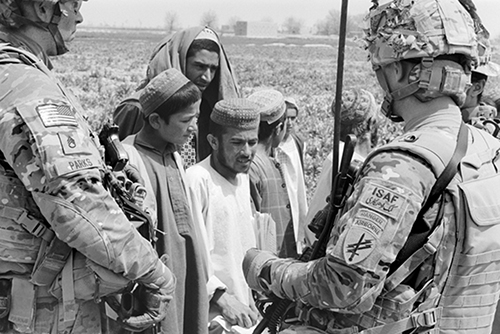 An MTSU student turned U.S. Army veteran let his camera tell the story of his service in Afghanistan in a recent exhibit inside the Todd Art Gallery on campus.

Duran Bunch, a junior marketing major, introduced his photos in an exhibit “Afghanistan: Through the Eyes of a Soldier,” which was on display Aug. 29-Sept. 19 in Room 210 of the Todd Building.

In 2009 Bunch joined the U.S. Army Reserve’s 325th Tactical Psychological Operations Company (Airborne) as a specialist and winding up in Kandahar, Afghanistan, to support the 82nd Airborne in 2011 and 2012.

Bunch, 25, bought a Pentax ZX-M 35mm camera and kept it and plenty of black-and-white film at hand throughout his tour of duty, using knowledge gained from working with renowned photographers Steven Klein and Steven Meisel to capture his documentary-style shots.

You can learn more about the exhibit and Bunch at http://mtsunews.com/duran-bunch-photo-exhibit.