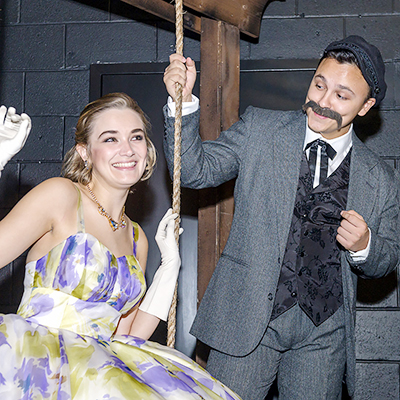 Click on the poster for a link to tickets for the MTSU Theatre production of “Uncle Vanya” Nov. 4-8.

“Don’t let Chekhov scare you off. Come. We’re making this show for you, for the person who is not sure if Chekhov’s for them,” said professor Halena Kays, one of the department’s newest additions and director of the play.

“There’s a reason people have hung onto this playwright for 115 years. He speaks to different ages in different ways.”

Tickets for the MTSU Arts performances, sponsored by Ascend Federal Credit Union, are available online at www.mtsu.edu/tuckertheatre and at the Tucker Theatre box office one hour before curtain times.

The Russian playwright wrote his classic in 1897, creating a bleak dysfunctional-family comedy of unexpected guests briefly shaking up the summer lethargy of “boring, stupid, sordid” life on a country estate. It’s regularly revived around the world to acclaim and awards.

“The lines are not as hard as you would think! There’s a lot, but somehow they’re coming easier than I ever would’ve imagined.”

Castmate and fellow senior Kelsey Blackwell of Memphis agreed. She and Rodriguez have worked together on several MTSU productions; in this one, she’s Yelena, the trophy wife of a retired professor, Aleksandr Serebryakov.

“I actually prefer classical acting and classical shows, but I’ve never done a Chekhov. It’s a little daunting. It’s a little challenging,” Blackwell said, “but every day in rehearsal I learn more about my character and the story and the nature of humanity. It’s really very beautiful.”

“Vanya” is one of four Chekhov plays that are required reading for all MTSU theater majors, but it’s been nearly a dozen years since a Chekhov play was performed at Tucker Theatre.

“I think the worry is that Chekhov is known for not having quick plot lines and plot turns. He’s more thinking about what it is to be alive and how we relate to each other and what’s going on in our lives. And that speaks to me really beautifully,” said Kays.

Even the set and lighting design are unique to MTSU’s production, incorporating a more surrealistic feel to accommodate the conversations on stage.

“One of the biggest challenges for me was to figure out how to convey (human relationships) in lighting design,” said junior theatre major Sydney Smith of Signal Mountain, Tennessee, who’s head of lighting design for the production.

“Trying to work through that was one of the most challenging but also one of the best things I’ve ever gotten to do — figuring out how to make things smaller or more open with light, trying to convey emotion through color and space in general.”

MTSU’s “Uncle Vanya” also will make use of most of the Tucker Theatre proscenium stage as well as the two side stages, thanks to the “highly physical” nature of the production.

“There are some challenges in this space to create intimacy and to work with … the idea that these people are having these relationships that are kind of hard to comprehend and understand,” said first-time set designer John Underwood, a Murfreesboro junior, “but it’s actually something we all deal with every day.

“I like the approach of trying to give an ode to the original translation and making it work for the translation we’re doing here. I think with the scale and the size of Tucker, you have to bring something big to the table.”

Stage manager Sadie Katie Hampton, a senior and Knoxville native, said the cast and crew quickly lost their uncertainty about working with a new director on an unfamiliar play and have brought their best work to the table for their audiences.

“Halena’s been wonderful to work with. She’s shown me a lot of stuff that I as a stage manager hadn’t known about. In just a couple of weeks, I learned so much by watching her work, about the type of environment I want to create and keep going forward,” Hampton said.

“This show is very real. Even though people are put in very crazy situations and trying to express how they feel, or don’t feel, and they don’t know how to do that, that’s real life, to me. I love watching that. We have a very creative and open environment, and I think this is one of the shows that people are really going to understand and relate to.”

General admission tickets are $10 each and $5 for K-12 students and senior citizens. MTSU students with valid IDs will be admitted free. For more information, visit http://mtsuarts.com.