Tickets still available for ‘U.. 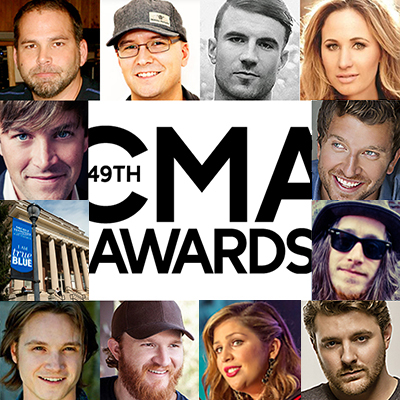 They had no big wins this year, but there were plenty of nominations, record sales and acclaim for MTSU alumni projects at the 49th annual Country Music Association Awards in Nashville Wednesday night, Nov. 4.

Laird also was nominated for CMA Song of the Year for co-writing Kenny Chesney’s “American Kids.” That nomination duplicated a Grammy nod earlier this year for Best Country Song.

Music producer Knox has worked with some of the biggest names in country music but is perhaps best known for his production work with country superstar Jason Aldean, with whom he shared the 2011 CMA Award for Album of the Year for “My Kinda Party.”

Knox has produced 13 No. 1 career singles so far for Aldean, including his No. 1 duet with Kelly Clarkson, “Don’t You Wanna Stay.”

Along with forming a production management company, Music Knox, with three of his clients, Knox, a 2001 MTSU graduate, also serves as senior creative director for peermusic Group in Nashville.

Laird earned his MTSU music business degree in 2001 and has had more than 14 No. 1 singles and countless awards since he signed his first publishing deal in 2002. He and his wife also founded Creative Nation, a music publishing and management company.

The CMA also recognized country newcomer Sam Hunt, who attended MTSU and played football for the Blue Raiders, at the 2015 show with nominations for New Artist of the Year and both Single of the Year and Song of the Year for his co-written hit “Take Your Time.”

Country trio Lady Antebellum, which includes former MTSU student Hillary Scott, was nominated for the seventh consecutive year for the CMA’s Vocal Group of the Year.

The CMA Awards regularly include nominations for MTSU-trained professionals, including:

Almost 20 MTSU alumni or former students and faculty from around the university also have been nominated for Grammy Awards in the last five years.

Seven have won Grammys so far, including some repeat recipients, in categories from classical to gospel to bluegrass.