MTSU Theatre has ideas for ‘Ev.. 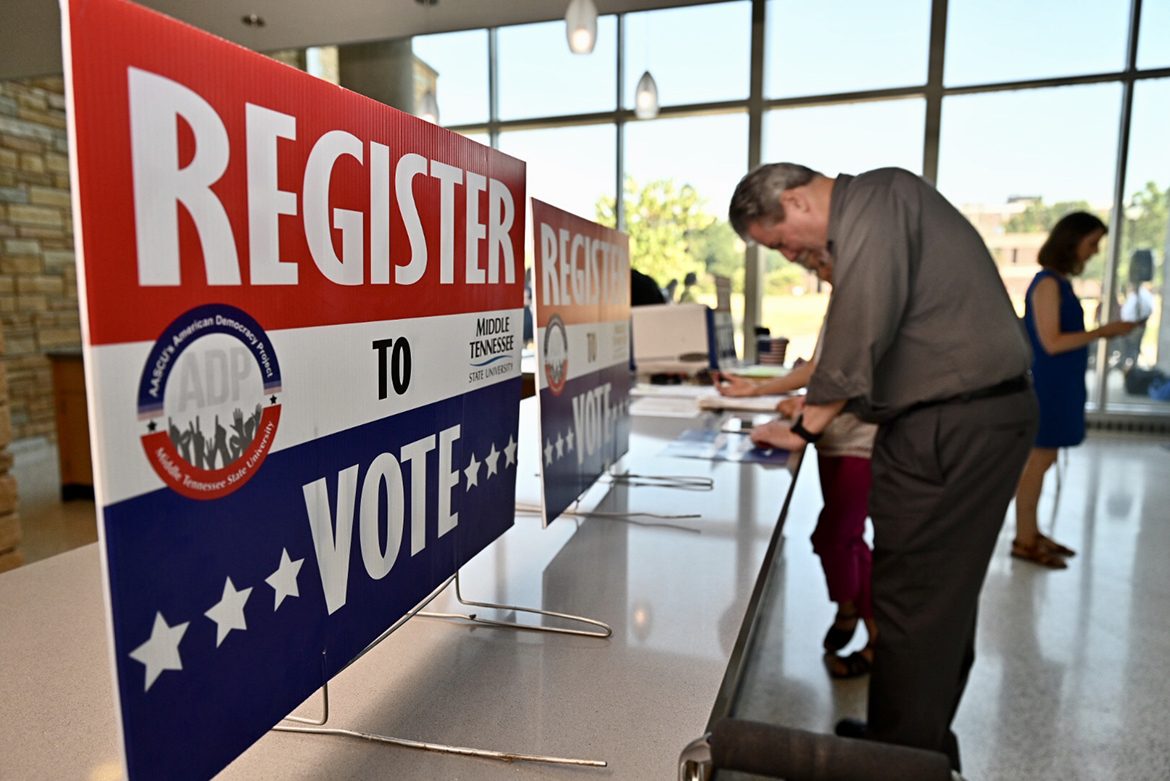 More than 2,000 students registered to vote at the 48 schools participating in the September contest, according to a news release from Hargett’s office. MTSU registered 381 new voters during the competition.

The competition took place during September in honor of National Voter Registration Month. Every college and university in the state had the chance to compete by registering the most students to vote and to spread awareness of the campaign on social media using the hashtag #GoVoteTN, along with their school-specific hashtag, the release states.

The winning schools — a four-year public college/university, a two-year community/junior college, and a private college/university — were selected based on the number of new students registered and their social media presence (both weighted by student enrollment) as well as their campus creativity in promoting the college voter registration drive.

“Participation in the electoral process is essential to strong citizenship,” Hargett said. “I’m grateful for the nearly 50 Tennessee colleges and universities that participated in our annual competition. Congratulations to all of the students who played a part in registering their fellow students to vote.”

As part of this year’s Constitution Day activities in September, MTSU set up voter registration tables across campus in advance of the 2020 elections. Constitution Day coordinator Mary A. Evins, an associate research professor in MTSU’s University Honors College and coordinator for the campus chapter of the American Democracy Project, urged students to “register in the county where you sleep, where you park your car at night, where you put your shoes under the bed.”

MTSU also continues its ongoing “True Blue Voter” initiative, a partnership with the Rutherford County Election Commission launched last year to boost voter registration and awareness in time for the 2018 mid-term elections. The effort, with the help of American Democracy Project members and the MTSU Student Government Association, has added hundreds of new voters to the rolls so far.

The university’s American Democracy Project, which promotes increased civic engagement and awareness among students, has partnered with other campus and community organizations in recent years to increase voter registration and participation, part of similar efforts at campuses nationwide. 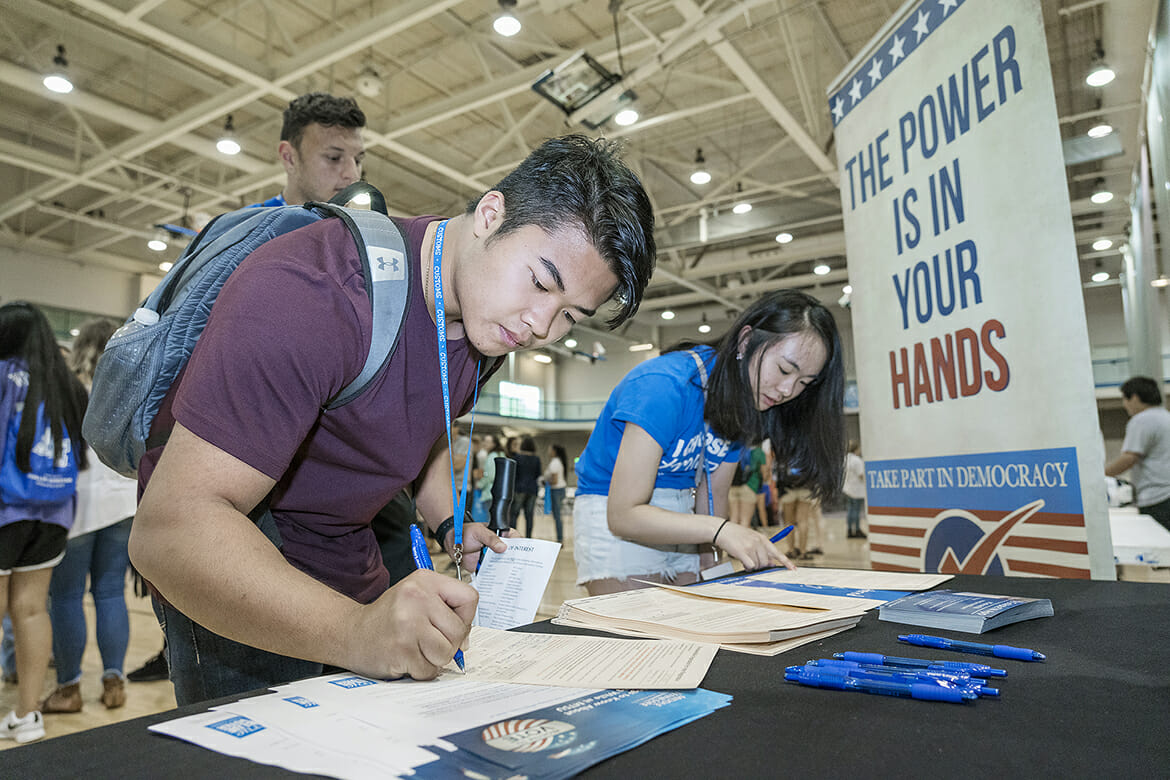 Incoming MTSU students Skyler Senesombath and Amy Lin register to vote as Zachary Brow awaits his turn at one of the True Blue Voter registration tables available this summer at the Campus Recreation Center during the 2018 CUSTOMS new student orientation sessions. Almost 200 students were registered during the ongoing initiative in partnership with the Rutherford County Election Commission. (MTSU file photo by J. Intintoli)

A September report based on the National Study of Learning, Voting, and Engagement shows that nationwide, the voting rates at participating college campuses doubled on average compared to the previous 2014 midterm. The study, conducted by the Institute for Democracy & Higher Education at Tufts University, is the only such national look at college-student voting and was based on the voting records of more than 10 million students at more than 1,000 colleges and universities in all 50 states and the District of Columbia.

In 2018, the average voting rate among campuses in the study was 39.1 percent, nearly 20 percentage points higher than 2014’s average turnout rate of 19.7 percent. Turnout increases were widespread, with virtually all campuses seeing an increase over 2014, the report states. 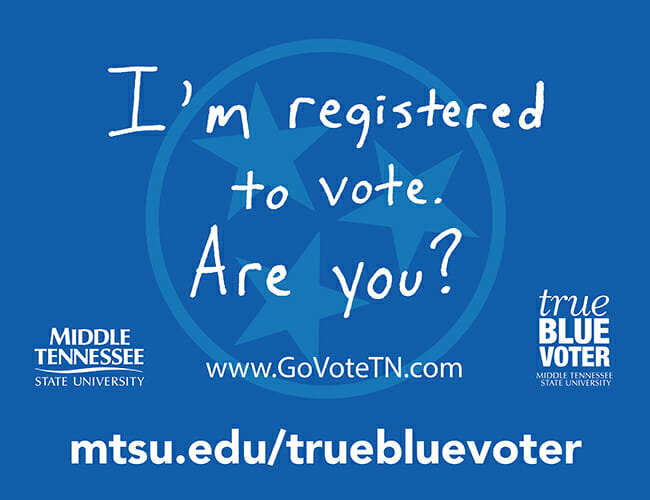 MTSU’s increases were even more impressive:

Rutherford County Election Commission Administrator Alan Farley noted that a key factor in driving student and overall voter participation in 2018 was the presence of more competitive statewide races — specifically for governor and U.S. Senate — something that was in short supply in 2014.

He added that he believes the county’s implementation of Convenient Vote Centers, allowing voters to cast ballots at numerous locations throughout the county regardless of where they lived, also helped drive more participation by making it easier to vote.

“What’s wonderful is the noteworthy increase from four years ago. The youth vote increased nationally, and MTSU was part of that national surge,” Evins said. 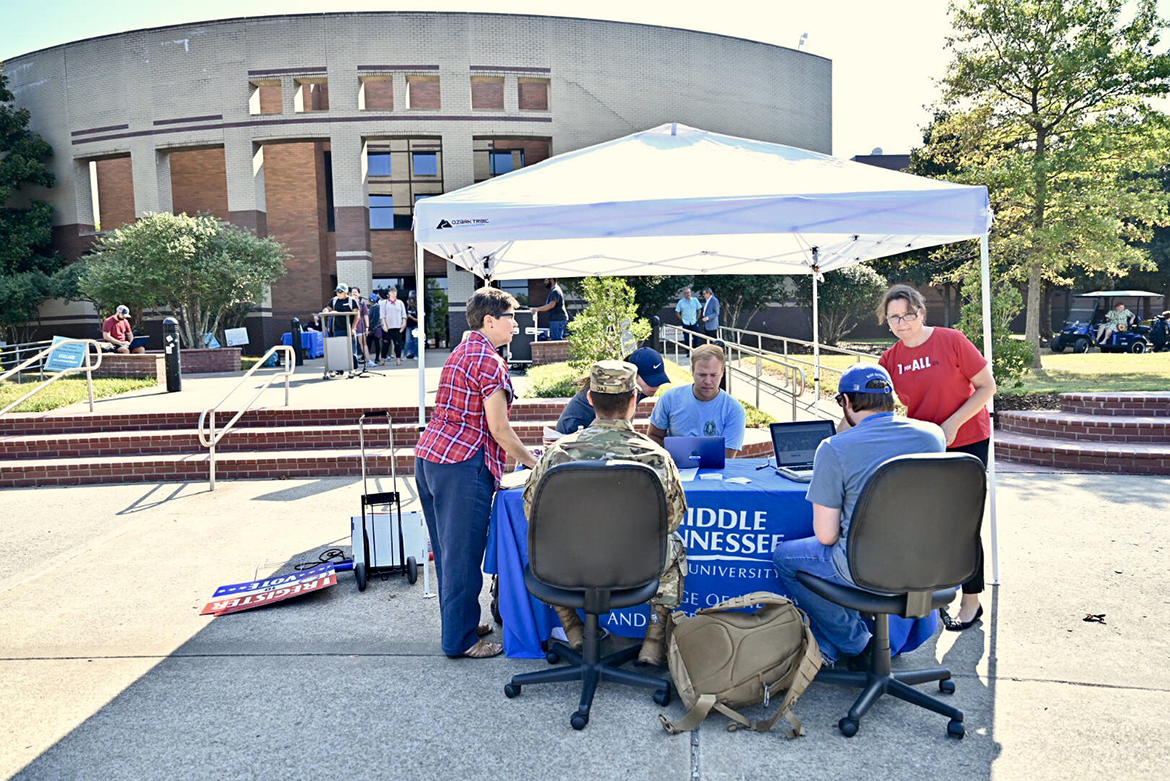 This voter registration table near the Bragg Media and Entertainment Building was among multiple locations set up Tuesday, Sept. 17, across campus as part of MTSU 2019 Constitution Day celebration. (MTSU photo by J. Intintoli) 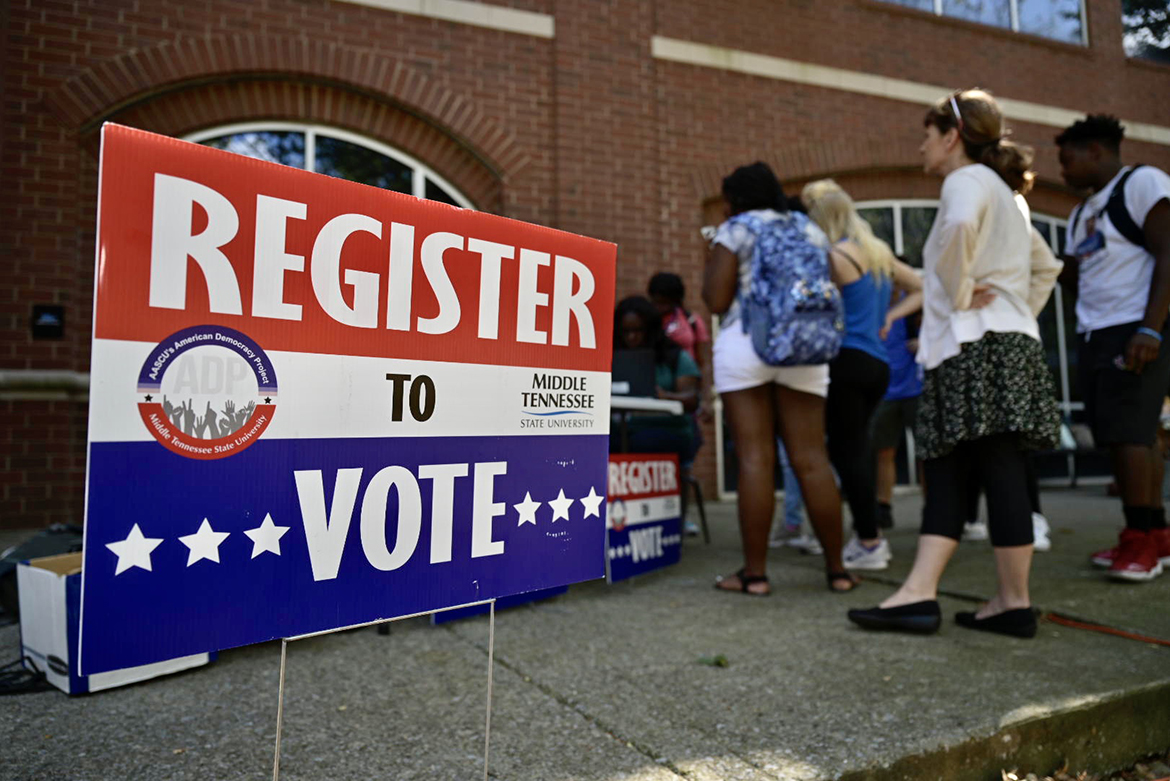 This voter registration table was among multiple locations set up Tuesday, Sept. 17, across campus as part of MTSU 2019 Constitution Day celebration. (MTSU photo by Andy Heidt)