MTSU’s 2019 Constitution Day celebration was highlighted by a lively panel discussion about the battle for women’s suffrage and the modern challenges and obstacles to accessing to the ballot box.

The university’s annual observance of Constitution Day was held Tuesday, Sept. 17, as students, faculty, staff and visitors marked the 232nd anniversary of the signing of the U.S. Constitution by reading the historic document aloud, in its entirety, and registering voters at multiple sites across MTSU throughout the day.

The trio examined Tennessee’s pivotal role in giving women the right to vote in the United States and how those votes have played a crucial part in American history in the last century. 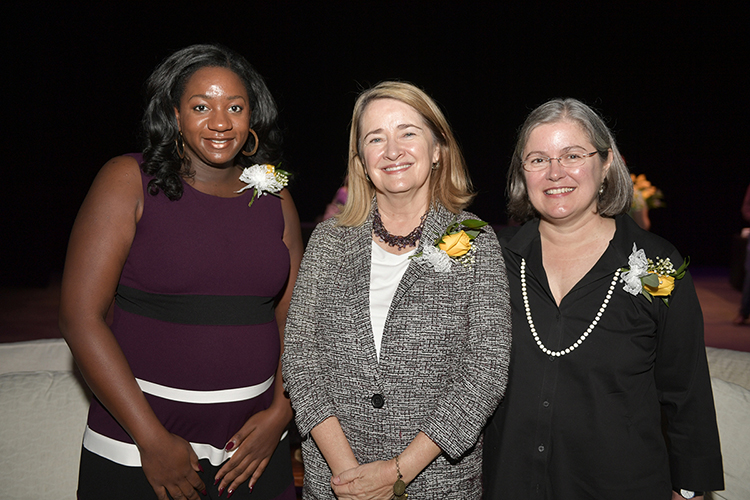 “It’s only been a hundred years since we’ve become full citizens of this nation, which seems like such an impossibly short period of time,” said Renkl, a Nashville author whose recently published collection of essays, “Late Migrations: A Natural History of Love and Loss,” was a Publishers Weekly magazine “Pick of the Week.”

Tennessee’s General Assembly narrowly ratified the 19th Amendment on Aug. 18, 1920, making Tennessee the 36th of 48 states to sanction women’s suffrage. The decision, which earned Tennessee the nickname of “The Perfect 36,” delivered the necessary three-fourths majority to amend the U.S. Constitution.

“It was a profound moment in Tennessee history that still reverberates today,” MTSU history professor Carroll Van West, Tennessee State Historian and director of MTSU’s Center for Historic Preservation, told the hundreds in attendance as he introduced the panel.

Lamar, who became Tennessee’s youngest legislator in January 2019 when she was sworn into office for her first term at age 28 to represent the 91st District, said the historic election of President Barack Obama in 2008 planted a seed of determination that she too could become an elected official.

That inspiration led to increased political activism throughout her college career in Indiana and continued when she moved back to her native Memphis to participate in Democratic Party politics.

She’s passionate about getting younger generations involved in the political process by ensuring they register and vote regularly.

“I think it’s important to draw young people into the conversation, because now we are the largest demographic of eligible voters in this country,” Lamar said during a pre-event interview. “And it’s important that we amplify our voices around voting and truly take a part in this process so that we see the country we want to live in.”

A bipartisan measure Lamar is co-sponsoring with state Rep. Charlie Baum of Murfreesboro, an MTSU economics professor who attended the panel discussion, and state Sen. Raumesh Akbari of Memphis would give university students, faculty and staff easier access to the polls by using Tennessee public institutions with 8,000-plus student enrollments for early voting sites.

Lamar’s comments about resistance from some fellow lawmakers and other state officials to that proposal drew some of the largest applause from the audience, as did discussion of a controversial state law — recently blocked by a federal judge as unconstitutional — that threatens civil and criminal charges against voter registration groups.

“Institutions of higher learning should be the perfect place for young people to engage in the civic process, when we are learning how to be stewards of our community and how we’re going to influence the next generation of (leaders),” she said.

“You wonder why so many young people are fatigued with the political process; it’s because we make it so hard for you to engage in the process in the first place. It’s ridiculous.” 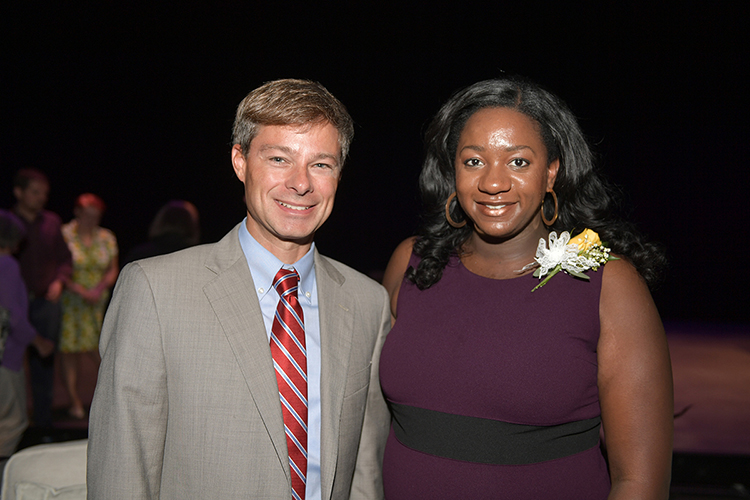 State Rep. London Lamar, D-Memphis, right, and state Rep. Charlie Baum, R-Murfreesboro and an MTSU economics professor, pose for a photo after the “Suffragists and Citizenship” panel discussion held Tuesday, Sept. 17, at MTSU’s Tucker Theatre as part of the university’s 2019 Constitution Day celebration. Lamar, who was a panelist, is co-sponsoring legislation with Baum and state Sen. Raumesh Akbari of Memphis that would give university students, faculty and staff easier access to the polls by using Tennessee public institutions with 8,000-plus student enrollments for early voting sites. (MTSU photo by James Cessna)

Spruill, the Distinguished Professor Emerita of History from the University of South Carolina, is the preeminent scholar of the women’s suffrage fight in Tennessee.

Her most recent book is “Divided We Stand: The Battle Over Women’s Rights and Family Values That Polarized American Politics,” and she served as a consultant for a PBS documentary, “One Woman, One Vote,” the HBO movie “Iron Jawed Angels” and Nashville Public Television’s recent “By One Vote.” She’s currently creating an oral history archive of interviews from the 1977 National Women’s Conference in Houston, Texas.

“We know that it’s not over,” Spruill said before the panel. “And that recent events, Supreme Court decisions and then the resulting actions of many states make it clear that given the opportunity by the Supreme Court, a lot of states are once again seeking to deny people of color the vote. … So this struggle for the vote, it’s not over.”

Panel organizer Mary A. Evins, an associate research professor in MTSU’s University Honors College and coordinator for MTSU’s chapter of the American Democracy Project, told the audience that Tuesday’s event was “the Murfreesboro, Rutherford County and MTSU kickoff of a celebratory year for studying, thinking about and talking about and generating civic energy about the 19th Amendment … which finally, at long last, gave the other 50 percent of the citizens of this country true citizenship.” 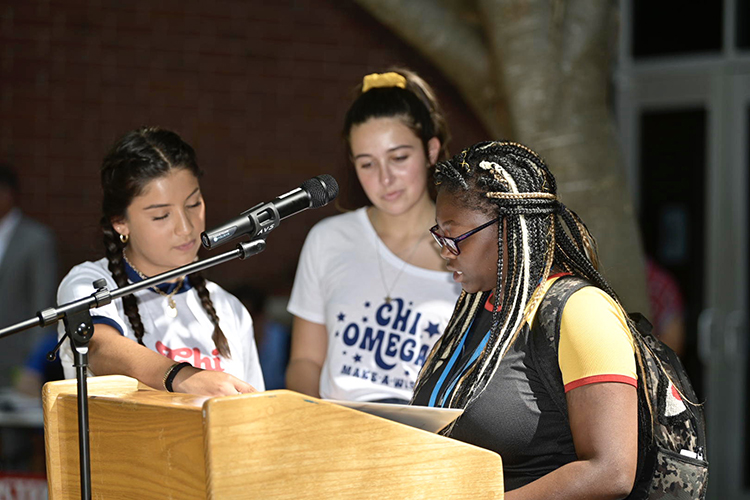 Voter registration tables set up across the MTSU campus all day helped citizens prepare for the upcoming 2020 elections, which begin March 3, “Super Tuesday,” with presidential preference and state and county primaries.

Among those participating in the Constitution readings was Tennessee Secretary of State Tre Hargett, who noted that the voter registration tables were usimg the state’s secure online registration platform.

“My short-term goal is for every member of this community, whether it be students, faculty or administrators, to be registered to vote and to be engaged in this process, because I believe every vote matters,” Hargett said.

Evins reiterated the opportunity to those attending the panel discussion.

“I want to admonish everybody to please go register and to check your registration,” Evins told the audience. “If you think you are registered, go to Tennessee Voter Lookup on your phones or your laptops to check to be sure that you’re registered. I also want to make a point of ‘live here, vote here.’ That just means that studies and data tell us that people actually vote if they are registered where they live, where they sleep at night.”

MTSU’s popular “True Blue Voter” initiative, a partnership with the Rutherford County Election Commission launched last year to boost voter registration and awareness in time for the 2018 mid-term elections, is continuing into the coming election cycle.

The effort, with the help of American Democracy Project members and the MTSU Student Government Association, has added hundreds of new voters to the rolls so far.

The suffrage panel was supported by the MTSU Center for Historic Preservation, the Tennessee Civil War National Heritage Area, the League of Women’s Voters of Murfreesboro/Rutherford County, the University Honors College and College of Liberal Arts, the Office of the University Provost, the MTSU Distinguished Lecture Fund and the Albert Gore Research Center at MTSU.

For more information about Constitution Day and other American Democracy Project events at MTSU, email amerdem@mtsu.edu or visit www.mtsu.edu/amerdem. 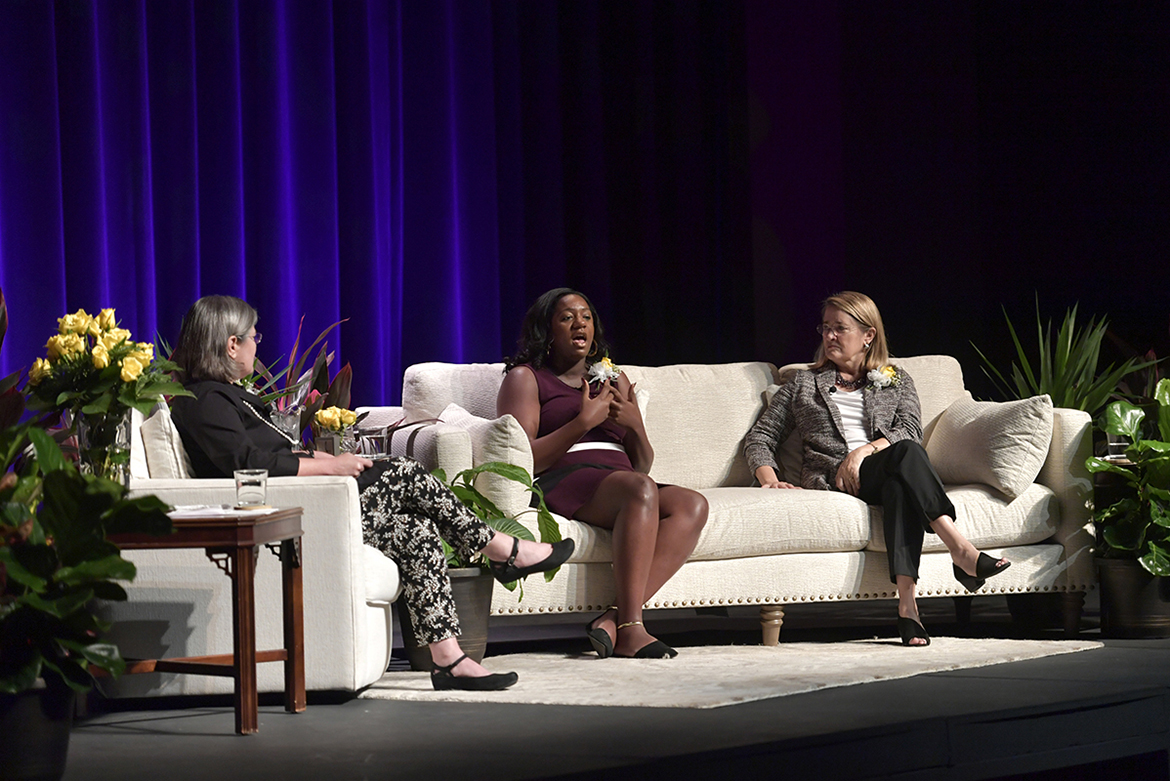