MTSU Board of Trustees reelect..

MTSU’s Political Economy Research Institute is hosting an academic conference this week to celebrate the centennial birthday of the late alumnus and Nobel laureate whose scholarship inspired its creation.

On Wednesday, Oct. 2, Peter J. Boettke of the Mercatus Center at George Mason University in Virginia will give a public lecture on “The Continuing Relevance of F.A. Hayek” in which Boettke discusses his new book, “F. A. Hayek: Economics, Political Economy and Social Philosophy.”

The lecture will be held at 12:40 p.m. Wednesday in the Business and Aerospace Building Room S102. Boettke has authored 14 books, including “Living Economics” and “The Battle of Ideas.”

Jay Cost of the American Enterprise Institute will be on campus Thursday, Oct. 3, for a public lecture on the U.S. Constitution. Cost, a columnist at National Review Online, is the author of three books, including “A Republic No More: Big Government and the Rise of American Political Corruption.”

Cost will speak at 7 p.m. Thursday in the Business and Aerospace Building Room S102. 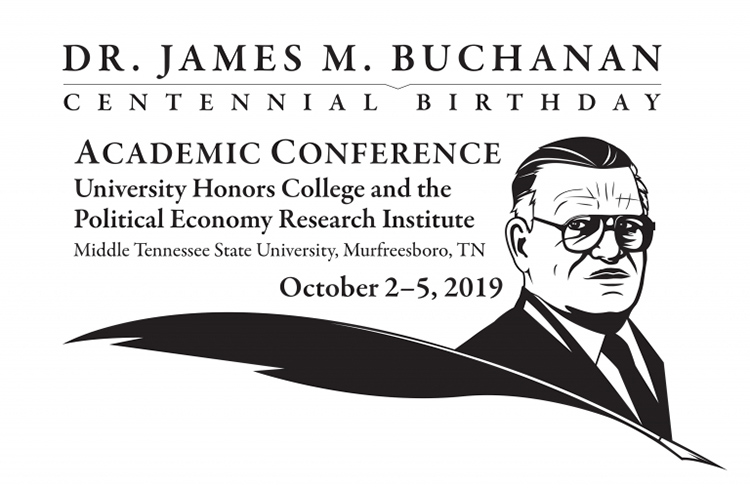 “This conference, attracting top scholars in political economy from around the world, will provide an intellectual foundation for the Political Economy Research Institute to build upon,” said PERI Director Daniel Smith, an associate professor of economics. “The quality of the submitted papers pay a fitting tribute to James M. Buchanan’s legacy of groundbreaking scholarship by advancing our understanding of political economy.”

Buchanan, a 1940 graduate of Middle Tennessee State University and a Rutherford County native, received the 1986 Nobel Memorial Prize in Economic Sciences for his leadership in developing the public choice theory of economics. He died in 2013 at age 93.

Conference sessions include: Influences on James Buchanan; Democracy; Constitutions; the Academy and Research in Public Choice; and Appraisals and Extensions. Scholars from throughout the nation will give presentations, with some discussions facilitated by MTSU’s Michael Federici, chair of the Department of Political Science and International Relations; Ennio Piano, assistant professor of economics and PERI faculty member; and John Vile, dean of the University Honors College, political science professor and Constitutional scholar.

“We have arranged for the papers presented at the conference to be considered for a special issue of the prestigious academic journal Public Choice, which will extend both their reach and shelf-life beyond the participants gathering here in Murfreesboro,” Smith said.

“Importantly, the conference, by introducing these visiting scholars to our own faculty and graduate students, creates the possibility for future scholarly discourse and collaboration. Our hope is that events such as this, along with the PERI’s fellowship and faculty support, will solidify MTSU’s Ph.D. in Economics program as a premiere place for studying public choice.”

Buchanan is broadly recognized as one of the key founders of the field of public choice, which applies economic reasoning to the public’s understanding of political outcomes and the political institutions that influence those outcomes. Buchanan’s gifts to the University Honors College at MTSU supports the prestigious Buchanan Fellowship Program, MTSU’s top scholarship awarded to 20 freshman student scholars each year.

In 2006, MTSU President Sidney A. McPhee established the Buchanan Fellowship program in the University Honors College intended to attract top scholars from across the state and country.

The conference, in addition to celebrating Buchanan’s scholarship and generosity, will also provide Buchanan Fellows with an opportunity to engage his intellectual contributions, Smith added.

A searchable campus map is available at http://bit.ly/MTSUParkingMap. Off-campus visitors attending the public lectures can obtain a special one-day permit at www.mtsu.edu/parking/visit.php or from MTSU’s Office of Parking and Transportation at 1403 E. Main St.

About The Political Economy Research Institute

Established in late 2016, the Political Economy Research Institute is a joint venture between the Jennings A. Jones College of Business and the University Honors College, established with initial seed money from the Charles Koch Foundation.

The institute’s mission is to engage undergraduate and graduate students with faculty in research that will further the understanding of business and economic principles, as well as their impact on regional, national and international financial conditions and the well-being of society. To advance its mission, the PERI will engage in research and educational programs that uncover the institutions and policies that encourage and enhance human well-being. 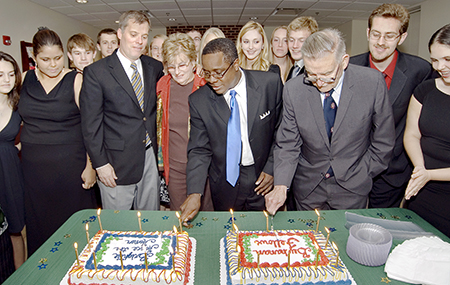 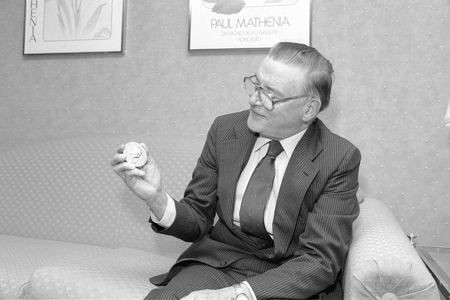 While visiting MTSU in 1988, the late Dr. James M. Buchanan holds the Nobel Memorial Prize in Economics and Science he received in 1986 “for his development of the contractual and constitutional bases for the theory of economic and political decision-making.” He is the only MTSU alumnus to be awarded a Nobel Prize. (MTSU file photo)