MTSU Board of Trustees reelects Smith, Freeman to ...

MTSU Board of Trustees reelects Smith, Freeman to posts

MTSU alumnus Stephen B. Smith was unanimously reelected to a second two-year term Wednesday as chairman of the institution’s Board of Trustees.

Smith, who has held the top trustee role since the board was created in 2017, has been a vocal advocate of the university’s adult degree completion program, earning his bachelor’s degree in 2011, about 30 years after he left the campus as a student-athlete.

The board also reelected fellow MTSU alumnus Darrell Freeman, former executive chairman of Zycron Inc., to a second two-year term as vice chairman during the quarterly meeting inside the Miller Education Center on Bell Street.

And, in other business, MTSU President Sidney A. McPhee told trustees this year’s entering freshman class is the largest that the university has enjoyed since 2011, setting new records for ACT scores and high school grade point averages.

Smith, chairman of the board of Haury and Smith Contractors and who served on the board of the Metropolitan Nashville Planning Commission, thanked trustees for their confidence.

“I’m flattered and appreciative. We’ll continue working hard to help more (students) try to have a better life. That’s the one goal that all of us have,” Smith said. “We’re here to help.”

Smith, a member of the Blue Raiders Sport Hall of Fame, earned three letters on the baseball team, winning the Ohio Valley Conference Championship in 1976. He was instrumental in the construction in 2009 of MTSU’s Reese Smith Jr. Field, named for his father. 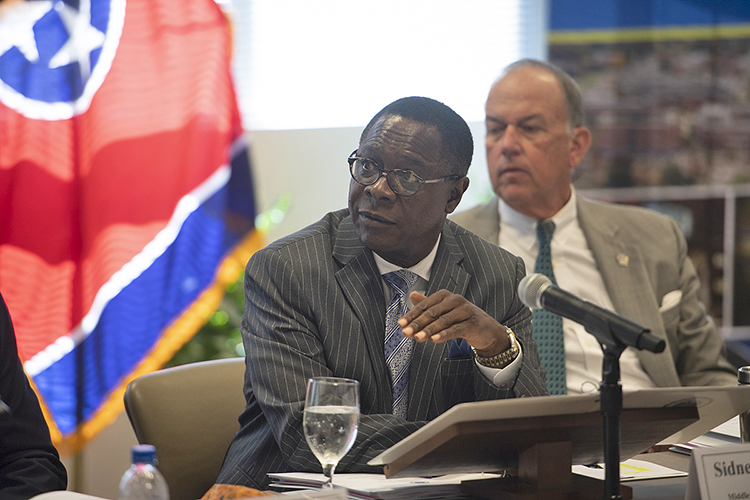 MTSU President Sidney A. McPhee listens to a staff presentation at the quarterly Board of Trustees meeting held Wednesday, Sept. 18, in the Miller Education Center. At right is Board Chairman Stephen B. Smith, who was reelected to a two-year term at the meeting. (MTSU photo by James Cessna)

Freeman, who lent his aircraft and services as a pilot during the recent Raider Relief efforts to help families of Bahamian students impacted by Hurricane Dorian, echoed similar appreciation.

“MTSU changed my life and I hope that the work we do here will change the lives of other students, particularly those who may not have the (same) opportunity to pursue the American dream,” said Freeman, who sold Zycron in 2017 in a deal worth more than $20 million.

Freeman, who got his bachelor’s and master’s degrees from MTSU, is also co-founder and chairman of Pinnacle Construction Partners, which provides preconstruction planning and construction management services.

“We have enjoyed growth and success without sacrificing quality,” McPhee said.

In other business, trustees endorsed the creation of a Bachelor of Science in Data Science.

Trustee Pam Wright, chair of the Academic Affairs, Student Life and Athletics Committee, said the degree “will prepare individuals to design and manage the construction of databases and related software programs and applications.” 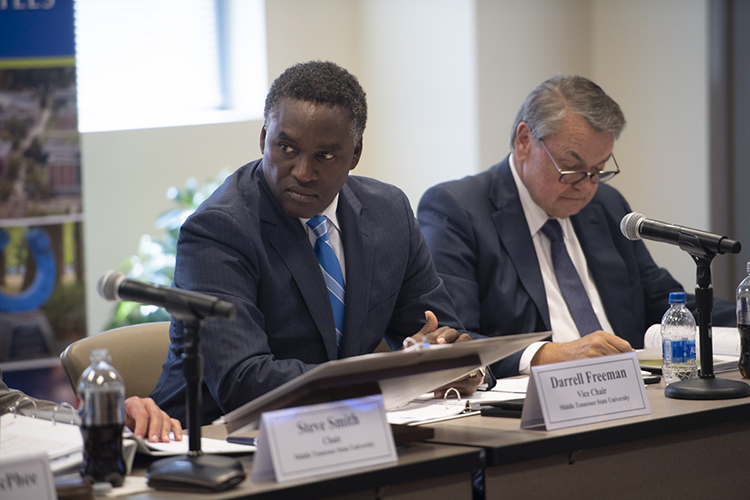 MTSU Board of Trustees Vice Chairman Darrell Freeman, center left, was reelected to a two-year term during the board’s quarterly meeting held Wednesday, Sept. 18, at the Miller Education Center on Bell Street. At right is Trustee Joey Jacobs. (MTSU photo by James Cessna)