MTSU Board of Trustees reelect.. 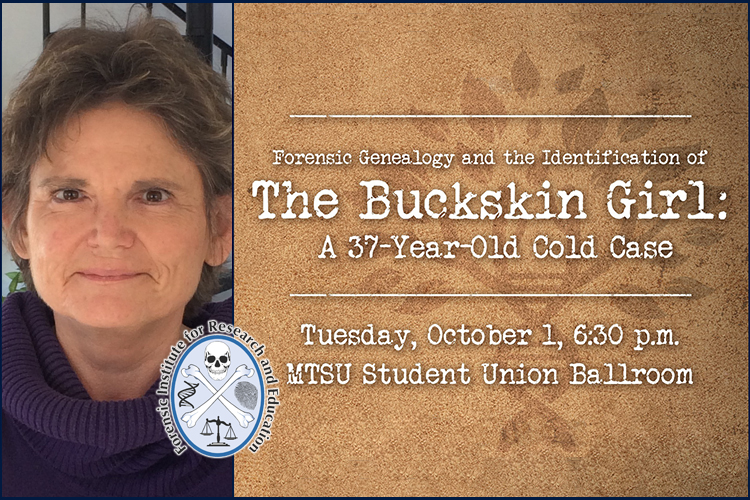 The co-founder of the DNA Doe Project, whose painstaking work with genetic genealogy has helped solve dozens of baffling homicides, will visit MTSU Tuesday, Oct. 1, for a free public talk on one of her most fascinating cases. 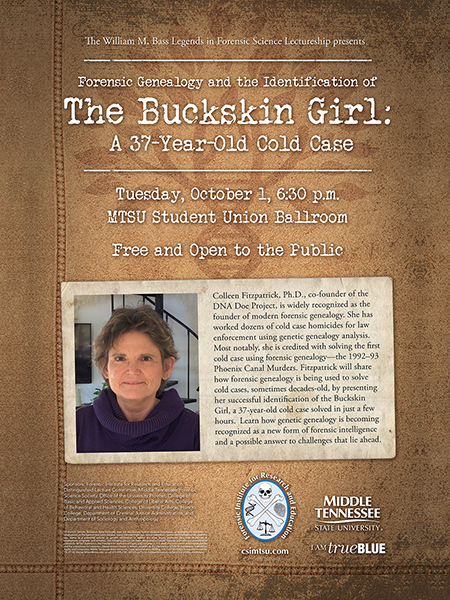 Scientist Colleen Fitzpatrick will speak on “Forensic Genealogy and the Identification of ‘The Buckskin Girl’: A 37-Year-Old Cold Case” at 6:30 p.m. Oct. 1 in the second-floor ballroom, Room 250, of MTSU’s Student Union, 1768 MTSU Blvd.

A campus parking map is available at http://bit.ly/MTSUParkingMap.

She is the fall 2019 guest of MTSU’s William M. Bass Legends in Forensic Science Lectureship series, presented by the university’s Forensic Institute for Research and Education, also known as FIRE.

Fitzpatrick’s lecture will focus on efforts to identify a young woman whose body was found in April 1981 in Ohio. Known as “Buckskin Girl” because of the tasseled jacket she wore when she was discovered, police struggled to learn her identity for 37 years.

Fitzpatrick first used genetic genealogy in 2014 to solve a “cold case” when she helped Phoenix, Arizona, police investigate three murders committed between 1992 and 1993 and attributed to a person they called “the Canal Killer.” She reduced a list of potential offenders down to a man with the last name of Miller, and police linked DNA from the murder scenes to an earlier suspect.

Fitzpatrick earned her doctorate in nuclear physics from Duke University and opened her own research and development optics company, Rice Systems, which closed in 2005 after NASA ended the Jupiter spaceship project on which her company was working.

She published a book on forensic genealogy that same year and set up a website on the topic. She began helping companies locate missing landowners; then, in 2007, she helped find the identity of a British toddler who’d died on the Titanic by linking his remains, buried in Nova Scotia, to surviving relatives in New Zealand.

Fitzpatrick used her abilities the next year to identify remains from a 1948 plane crash in Alaska and to prove that the writer of a Holocaust memoir was a fraud.

A Fellow of the Society of Photo-Optical Instrumentation Engineers and an associate member of the American Academy of Forensic Sciences, Fitzpatrick also is the founder of Identifinders International, a company that works with individuals and agencies to help find genetic relationships between people.

FIRE’s co-sponsors for Fitzpatrick’s lecture include the MTSU Distinguished Lecture Committee, the Middle Tennessee Forensic Science Society, the College of Liberal Arts and the Department of Criminal Justice Administration and Department of Sociology and Anthropology.