While a diagnosis of breast cancer is a life-changing event in anyone’s life, retired longtime MTSU administrator and alumna Gloria Bonner also used it as an opportunity for introspection, reflection and personal growth.

The two-time cancer survivor is being honored for the resilience and grace she’s shown throughout her journey to good health as the 2019 honoree for the eighth annual Wine Around the Square fundraiser set for Saturday, Sept. 21, in downtown Murfreesboro.

The wine-tasting event includes a VIP event from 5 to 7 p.m., a main event from 6 to 9 p.m., and a post event starting at 9 p.m. Ticket information and more details are available here.

Her community engagement and passion for education is legendary.

“For more than four decades, Gloria has invested her time and talents into strengthening our community through education and service,” says MTSU President Sidney A. McPhee. “When faced with her own personal battles against cancer, Gloria’s resolve to this mission never waned. In fact, it deepened and grew as she took on the roles of mentor, supporter and adviser for others fighting breast cancer.”

In January 2016, Bonner accepted the spiritual challenge to participate in a 21-day period of fasting and prayer, according to a Saint Thomas news release. During that time, she came to believe that it was time to prepare to make a transition into what she’d call “the golden time” of life.

After four decades of successful teaching, research and creative activities, community service and administration at all levels, she came to the realization that “it was time to conclude an academic career that was nothing short of amazing,” the release states.

Little did she know that five months into her retirement she would be diagnosed, for the second time, with breast cancer. She vividly recalls receiving the diagnosis on Friday, July 21, 2017 — at age 67. 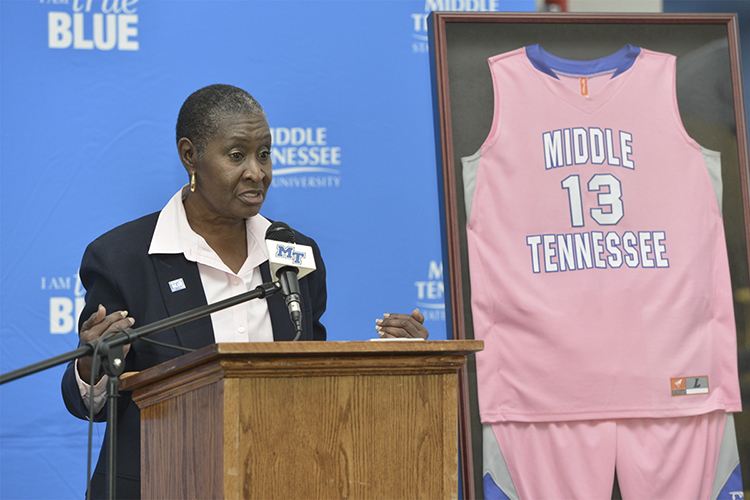 In this 2014 file photo, Dr. Gloria Bonner, MTSU special assistant to the president and a breast cancer survivor, speaks about the importance of cancer research and awareness during a press conference inside the Kennon Sports Hall of Fame. At right is a special pink uniform like those worn by the women’s basketball team at the 2014 Play 4Kay Power of Pink game at Murphy Center. (MTSU file photo by Andy Heidt)

Although she had no family history of breast cancer, exercised preventive healthcare practices throughout her adult years, scheduled regular mammograms and lived a relatively healthy lifestyle, the diagnosis changed her exciting retirement plans almost immediately.

Based on previous medical diagnoses and care following her left breast lumpectomy and radiation treatment in 2012, she was resolute in believing she would receive the best medical care possible. She never questioned the professional decisions and recommendations of “my amazing team of healthcare providers,” the release states.

Bonner was also encouraged by technological and scientific advances in early detection, immediate treatment and supportive care. She embraced the concept that her diagnosis was not terminal, despite undergoing a bilateral mastectomy and chemotherapy.

She was more determined than ever to show resilience and was well aware that cancer can touch all aspects of someone’s life and those of their loved ones. It also helped her realize the significance of the concept “it takes a village” and how much she needed support from her family, friends and community, the release states.

As she reflects on her journey, Bonner says that her resilience “is a character trait that developed as an important coping mechanism.” She and her family “were aware of the residual impact but chose not to be overwhelmed by the odds. We chose to rise above them and do whatever was necessary to get through the season of challenges ahead,” the release states.

They were determined, by the grace of God, not to let cancer get the better of them. Immediately, they began building a network of supporters “who believed in the healing power of God and proclaimed the goodness of our Lord and Savior.”

Bonner has always been grateful for the many opportunities and support she has received from family, teachers, administrators, church members, community stakeholders and her alma mater, MTSU.

“To have had the opportunity to develop and maintain effective networks and relationships … and support on behalf of the local community and the university was an honor, and these privileges were never taken for granted,” she says.

She received the title of Dean Emeritus in recognition of her distinguished leadership and service to the university and higher education. In her previous role, she worked on strengthening outreach initiatives and collaboratives with the community to advance the university’s mission of academic quality, student-centered environment, and partnerships.

Bonner has been married to Raymond Bonner, an MTSU Hall of Fame inductee, career head football coach and MTSU track and field assistant coach, for 44 years. They are the proud parents of actress Tracey Bonner.

Bonner says Saint Thomas staffers “were all there to provide the best quality medical care possible, in addition to educating, supporting, and empowering me to make informed treatment decisions.”

She also has come to realize that life is also serendipitous in many ways. Since her breast cancer journey began in 2012, several of her healthcare service providers were a part of her previous life as fifth-grade students at Mitchell-Neilson Elementary School and as student workers assigned to her office when she served as dean of the College of Education at MTSU.

It’s also been a source of comfort to know that her former students have made an impact on her life and the lives of others in many meaningful ways during a time of need.

“These are perfect examples of how our lives are continuously connected in meaningful ways indeed,” she says. 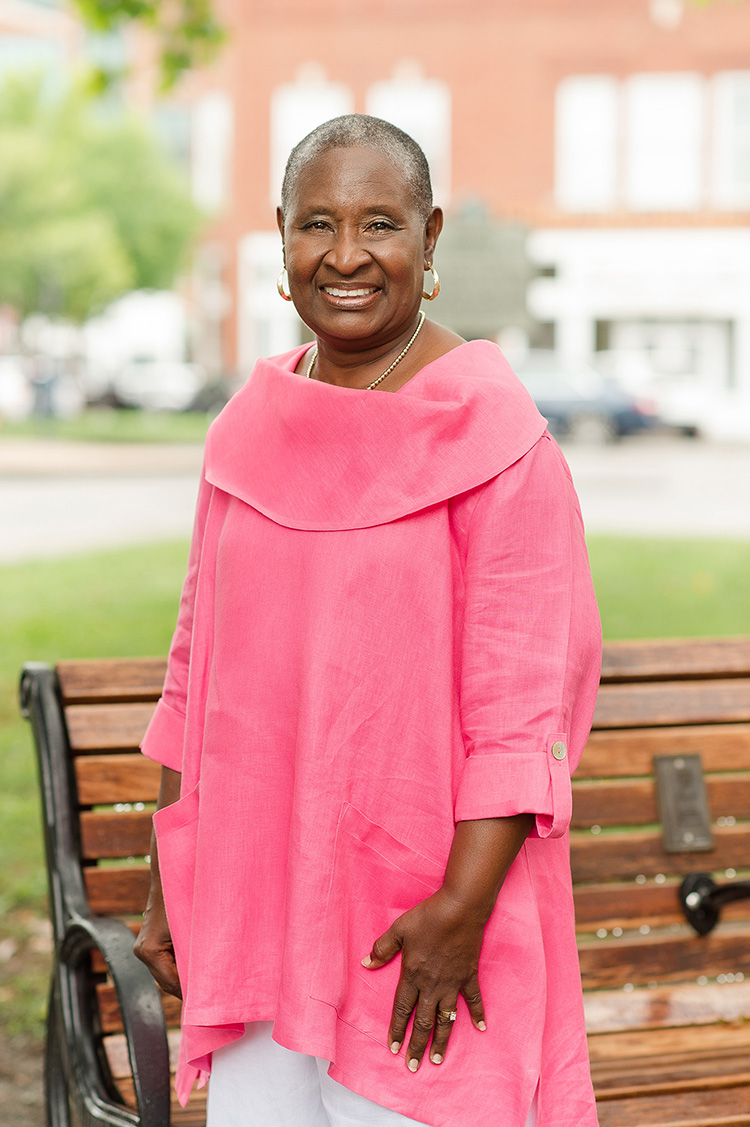