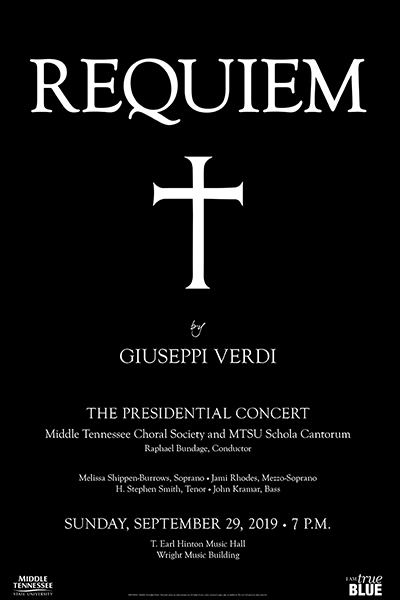 The concert is scheduled for 7 p.m. Sept. 29 in Hinton Hall inside MTSU’s Wright Music Building, located at 1439 Faulkinberry Drive.

Tickets are $15 for adults, $12.50 for seniors and $10 for children 12 and younger and are available online at https://mtchoralsociety.org and at the door. MTSU students, faculty and staff will be admitted free with current IDs.

Dr. Raphael Bundage, a professor of vocal performance in MTSU’s School of Music and the Choral Society’s music director/conductor, is conducting this joint MTSU-community performance of the Italian composer’s 1874 tribute to a nationally beloved poet and novelist, Allesandro Manzoni.

The choral groups also are welcoming four guest soloists for this special production:

• tenor H. Stephen Smith, associate dean of MTSU’s College of Liberal Arts and a vocal music professor in the School of Music.

• bass John Kramar, an associate professor of voice and opera at East Carolina University and director of the ECU Opera Theater.

A preview of the groups’ work is available below, featuring the MTSU Schola Cantorum and Middle Tennessee Choral Society performing the “Hallelujah Chorus” from “Messiah” at their 2017 holiday concert.

This concert, sponsored by the Office of the President, MTSU’s Sidney A. McPhee, launches another busy season for the Middle Tennessee Choral Society.

Its annual “Season’s Greetings” concert, set at 4 p.m. Sunday, Nov. 17, in Hinton Hall at MTSU with the Schola Cantorum, will feature the music of Georg Frideric Handel, Mack Wilberg and Felix Mendelssohn.