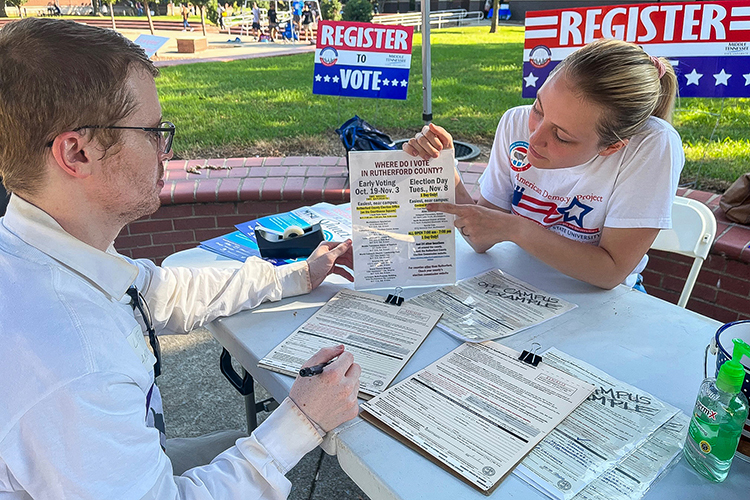 The tireless work of MTSU professor Mary A. Evins and her team of student and community volunteers has once again registered a success: the university earned its second win as the top four-year public university in Secretary of State Tre Hargett’s College Voter Registration Competition.

“Consistency, commitment, perseverance, drive and unwavering dedication got us this win,” said Evins, professor of history and coordinator of the university’s chapter of the American Democracy Project, or ADP.

The competition, which ran the full month of September, required competitors not only to register the largest number of students to vote but to launch and manage a creative and unique social media campaign with good engagement, which the secretary’s office tracked.

“ADP students, with help from the Student Government Association on Tuesdays, were register-to-vote tabling out on campus not just through the month of September but every day for seven solid weeks, from the first day of class through the last day of Tennessee voter registration before fall break,” Evins said.

“We also worked hard to post MTSU student photos to social media with both the MTSU and secretary office’s voting hashtags.”

MTSU volunteers registered 343 students to vote during the month of the competition.

Hargett extended his congratulations to the True Blue campus for its robust efforts.

“Congratulations to all the dedicated Middle Tennessee State University leaders who registered their fellow students and once again earned the top spot in the competition,” Hargett said. “Now more Blue Raiders are ready to cast a ballot and participate in our electoral process.”

Evins emphasized that for MTSU, the mission of registering students to vote extends beyond a single month or event.

“MTSU’s objective is serious, larger and more purposeful,” she said. “Our true achievement objective is to improve upon our own voting record: to better ourselves, to be sure that every single MTSU student is registered to vote and registered where she/he/they can get to the polls and vote. We want to elevate our university’s student voting numbers.”

Evins added that voting is democracy, and that student voting is the lesson of democracy in action.

“Supporting engaged citizen-scholars is one of MTSU’s primary goals,” she said. “To do everything we can to proactively encourage our students to become the engaged citizens they must be in our participatory democracy is of course what we do.

“So voter registration is important to MTSU, but it’s just a first step. Informed voting is the objective.”

When registering students to vote, volunteers helped equip students with a personal voting plan to vote where they live and sleep during the work week, which research shows gets people out to vote in the greatest numbers.

Evins encouraged the campus community, those with personal voting plans or not, to get out to vote now.

Students who need transportation to a polling station can take the MTSU Raider Xpress Green Line on Election Day, Nov. 8, which will take students back and forth from the front of the James Union Building and the polling place at Central Magnet School on East Main Street all day.

MTSU also is hosting a “Party at the Polls” event from 3 to 7 p.m. on the lawn of Central Magnet on Nov. 8, Evins added.

“Come vote and come celebrate with us on Election Day! Polls close at 7 p.m.”