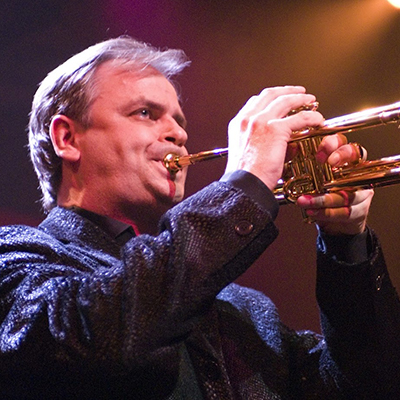 MTSU’s Wind Ensemble will close its 2013-14 season, which featured the international release of a second Naxos classical CD, with a free public concert at 7:30 p.m. Thursday, April 10, in Hinton Music Hall inside MTSU’s Wright Music Building.

Renowned trumpeter Jens Lindemann will perform with the MTSU Wind Ensemble in a special free concert on April 10 in the Hinton Music Hall on campus. (photo submitted)

MTSU’s premier performing ensemble for wind, brass and percussion students will be joined in their special concert by a return guest, world-renowned trumpet soloist Jens Lindemann, who performed with the group at their spring 2013 closing concert.

Lindemann, a former member of the Canadian Brass who has recorded with the Mormon Tabernacle Choir and presented a solo Royal Command Performance for Queen Elizabeth II, has performed as a soloist and recording artist with classical stars such as Sir Neville Marriner, Sir Angel Romero, Doc Severinsen, Charles Dutoit, Gerard Schwarz, Eiji Oue and Bramwell Tovey.

At the April 10 concert, Lindemann will perform two selections with the Wind Ensemble. You can watch one of his spring 2013 performances with the MTSU Wind Ensemble below.

MTSU’s Wind Ensemble continues to stand alone among Tennessee university bands after this winter’s release of its second CD, “Earthrise,” a collaboration with three international composers, on one of the world’s most prestigious classical labels.

MTSU boasts the only university band in Tennessee with recordings released by Naxos of America, the Franklin, Tenn., U.S. headquarters for the Hong Kong-based Naxos classical music group.

Dr. Reed Thomas, director of bands and a professor of music and conducting in MTSU’s renowned School of Music, conducted the Wind Ensemble for “Earthrise” as well as the 2011 release “Angels in the Architecture.” Thomas also will conduct the April 10 concert in Hinton Hall.

You can learn more about the MTSU Wind Ensemble and its latest CD at http://mtsunews.com/wind-ensemble-2nd-naxos-cd. Lindemann offers more details about his music at his website, www.trumpetsolo.com.

For more information on this and other MTSU School of Music events, call 615-898-2493 or visit www.mtsumusic.com and click on the “Concert Calendar” link.