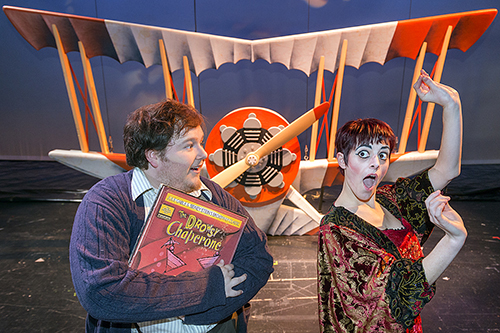 A starstruck musical theater lover’s imagination is coming to life on MTSU’s Tucker Theatre stage through April 13 with a family-friendly comedy that’s a dream come true for at least two of its actors.

“The Drowsy Chaperone,” a five-time 2006 Tony Award-winning musical, is a Cole Porter-esque parody, a show within a show, complete with 1920s stock characters romping across the set while a bashful Broadway fanatic provides running commentary.

Tickets are still available for the MTSU Arts production at www.mtsu.edu/tuckertheatre. Curtain times are 7:30 p.m. Wednesday through Saturday, April 9-12, and 2 p.m. Sunday, April 13.

Advance general admission tickets are $10 each and $5 for K-12 students and senior citizens when purchased online and $12 and $7 at the door. MTSU students with valid IDs will be admitted free.

“This actually is one of my dream roles,” explains MTSU senior Joshua Hosale of Antioch, Tenn., whose “Man in Chair” narrates the onstage festivities he’s imagining in his dreary apartment as he plays the soundtrack of his favorite — nonexistent — 1928 musical.

“I listened to the (Broadway) soundtrack long ago and knew every part. It’s so great for me to get to do this role early in my career. ‘Man in Chair’ actually is a lot like me; I annoy my friends because I love finding out random tidbits. … ‘Man in Chair’ is the person who has to put in his two cents’ worth, all the time.”

Fellow senior Alicia Pickett of Chattanooga is the kohl-eyed, wildly dramatic and usually quite tipsy “Chaperone” who swans across the stage and in and out of the “Man’s” imagination.

Click on the poster for a direct link to buy tickets online in advance and save $2 per ticket!

“I did some research and kind of wanted to be ‘Janet,’” Pickett says, referring to the imaginary musical’s female lead who’s the Chaperone’s charge. “Then, when I saw the Chaperone, I thought, ‘Hey, this sounds like the better deal.’ I’ve really fallen in love with this character. We’re both fabulous, but she’s more fabulous than I am.”

The story within “The Drowsy Chaperone” follows, as it were, the misadventures of a Broadway star and her ambivalence about her upcoming wedding to an oil tycoon. There’s also an imperturbable English butler, a ditzy scheming flapper, less-than-cleverly-disguised gangsters, a self-proclaimed Latin lover, a baffled best man and an aviatrix involved in enough mistaken identities, spit takes, tap dancing, roller-skating and wild dance numbers to keep an audience giggling long after the curtain falls.

The 22-member MTSU cast auditioned last December and started rehearsals in early February, working through their spring break for seven hours each day and “really digging in and getting a professional feel, because that’s what you do as a professional, when you’re not auditioning: spend hours in rehearsals,” explains director Kristi Shamburger, a Department of Speech and Theatre professor at MTSU.

“Fun!” Shamburger shouts with a grin. “There’s a connection for everybody at some point in this play. It’s just a jewel. There’s farce, there’s mistaken identity — it’s going to hit every generation.

“The older generation in our audience will be touched in a sentimental way and remember times gone by. Our ‘Man in Chair’ is going to hit home with much of our contemporary audience, and the physical comedy will appeal to the very young, too.”

Pickett agrees, adding that she expects theatergoers to “be walking out with a big smile on your face. You should never miss out on this.”

The “Man in Chair,” Hosale notes, is “really your guide to finding yourself and whatever it is you like to do, whether it’s musical theater, building cars or flying airplanes.

“I can’t wait until the auditorium is filled and we get to share this wonderful story,” Hosale adds with a bright smile.