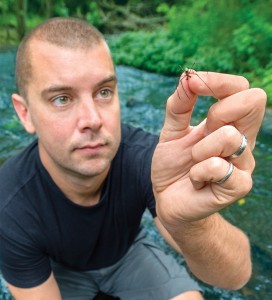 In early 2009, Dr. Ryan Otter (Biology) stood awestruck on the banks of the Emory River in Roane County. What two months earlier had been a serene fishing alcove now looked like a lunar landscape or a present-day Pompeii. Under his boots, where there should have been vegetation, there was gray sludge. And the water in the alcove was simply gone, displaced by wet fly ash, a thick chemical stew that had spilled into the river when an earthen retention pond ruptured at the TVA Kingston Fossil Plant.

“It was amazing, the volume of this thing,” Otter says. “I mean, it was a billion gallons of fly ash that clogged up a river. It looked like a war zone. And I thought, ‘This is a billion gallons of something that we know contains metals that can be toxic. How can this not be catastrophic?’”

That’s the kind of loaded question Otter doesn’t allow himself—or his students—to ask. An ardent “science nerd,” he’s all about design and data: assume nothing, develop a bulletproof experiment, and see what the numbers reveal.

However, the scope of the spill was unlike anything Otter, an environmental toxicologist, had ever seen. It was also unlike anything the United States had ever seen. The slurry blanketed everything in its path, pushing homes off foundations, choking two tributaries of the Tennessee River, and burying a 300-acre ecosystem.

For the people who lost their homes, the event was a life-changing disaster. But for the area’s quieter (and far more numerous) residents—the water and land animals—the prognosis wasn’t so
clear. Despite the ubiquity of fossil fuel plants worldwide, Otter says, there had been very little research on fly ash, a byproduct of coal combustion that contains trace amounts of many potentially dangerous elements, including arsenic, lead, and mercury.

Weeks after the spill, Otter joined a coordinated effort of several agencies to answer a slightly different version of his gut-level question: Is this an environmental catastrophe?

He found the answer in an unexpected place, and that answer surprised everyone.

More than six years after the Kingston spill, cleanup is ongoing. It’s projected to cost $1.2 billion and is slated for completion in 2015. Environmental monitoring of the site will continue for
years afterward.

Otter was initially called to the scene by the Tennessee Wildlife Resources Agency, which asked him to study the effects of dredging on mussels. Then he was connected with TVA and Oak Ridge National Laboratory (ORNL), which asked him to test fish for toxins to help gauge immediate and future implications of the spill.

He says the project was the most complicated he has ever worked on, and not just because of its massive scale. There were also the complex dynamics of the Emory River, which regularly runs backward when water is released from Melton Hill Dam on the Clinch River, which merges with the Emory. “The water literally goes back and forth, depending on what the dam is doing,” Otter says. “I had divers in the water who were three miles upstream of the spill, and they were sitting in ash.”

And while the Emory was relatively clean before the spill, the Clinch has long been polluted by runoff from ORNL. Researchers had to find out whether the toxins they found came from fly ash or from previous contamination. Then, in 2010, widespread flooding of the Tennessee River system further muddied the waters.

“All this made the hydrology crazy,” Otter says. 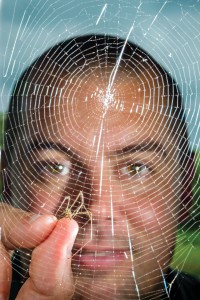 Spiders and the Fly

Otter’s test subjects were problematic, too. When analyses of toxin levels in fish proved inconclusive, he knew he needed a different animal—something whose diet was more closely connected with the fly ash. Then he remembered his Ph.D. work with researchers from the Environmental Protection Agency, who used a commonly found spider to measure contamination at polluted sites. The spiders are ideal indicators, he says, because they have high fat levels that store toxins.

The spiders, known as long-jawed orb weavers, are easy to find on any riverbank in the country. Shy and harmless, they hide in trees near the water during the day, and at night they spin webs to catch mosquitoes, black flies, and other bugs that live in and feed on sediment. With the help of two students, Otter spent two days on the river, shaking tree branches and bagging several hundred spiders, which he sent to a lab for chemical analysis.

Otter says he tries to conduct research with no expectations about the outcome. But when the lab results came in, he was as shocked as anyone. The spiders tested negative for every toxin but selenium—levels of which, while concerning, weren’t “off the charts,” he says. Further field and controlled studies supported his initial findings. Apparently, the other toxins had bound with carbon in the fly ash and settled, uneaten, on the river bottom.

While media images of the Kingston site were terrifying, the spiders told a more accurate story. Because they bridge the ecosystems of river and land, says Otter, spiders reveal more than most animals can.

“All fish can tell you is the impact on fish . . . and how contamination moves through water systems in one way,” he says. “But how is that contamination impacting things on the land? Fish can’t really help with that.”

Long-jawed orb weavers aren’t the only creatures that eat aquatic bugs, he says. So do birds and bats, which then become part of the terrestrial food chain. “So these spiders are really cool
indicators,” Otter says. “They can tell a story about what’s going on in the water and how much is leaving the water to come onto the land.”

Thanks in great part to Ryan Otter, there’s no longer a dearth of research on the environmental effects of fly ash. (His phone rang in early 2014, when a pipe ruptured at a Duke Energy fly ash pond in North Carolina.) And while his work on the Kingston spill site is complete, he’s just beginning his research with long-jawed orb weavers, which he considers invaluable but overlooked subjects in the study of food-chain dynamics. “They can tell a huge story that typically has not been told,” he says. 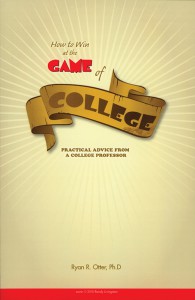 Ryan Otter might think of himself as a science nerd, but his students think of him as a guy they can go to for advice.

Since he joined the Department of Biology in 2007, Otter has spent many office hours talking to rudderless students about strategies for college success and guiding them toward fulfilling careers. He’s given so much advice, in fact, that he wrote a book on the subject, How to Win at the Game of College.

Otter sees himself in these students, who have been told they need a degree to get a job but who don’t know how to find their way or even where the path will lead.

“That was me,” he says. “I went to college with no idea what I was doing.” As a zoology major at Michigan State, he plugged away at his classes, driven by the vague promise that a degree equals a good job and good money. “Then I started looking at the data and I thought, ‘I don’t think that this is very accurate. I don’t see a diploma setting me up for what I think it’s going to.’”

As all scientists know, the data doesn’t lie. The trend Otter discovered when he ran the numbers still holds true: there are more college graduates than there are jobs for them. While graduation is critical, it doesn’t guarantee a job, much less a rewarding career. So college student Otter developed a detailed game plan to get where he wanted to go.

“[College is] just like any other game that you want to win,” he says. “You have to know who the other players are; you have to know what the rules are; and you have to have a strategy.” The plan worked for him, and at MTSU he began sharing it with students. He didn’t write it down until 2010, when his wife suggested that a book would save him time in the long run.

The book turned into a website, TheCollegeGameProject.org, with the tagline “Be Weird” (statistically weird, he explains.) The website has led to speaking engagements across the country.

Okay, call him a science nerd. But call his book and website great tools for playing and excelling in the college game.