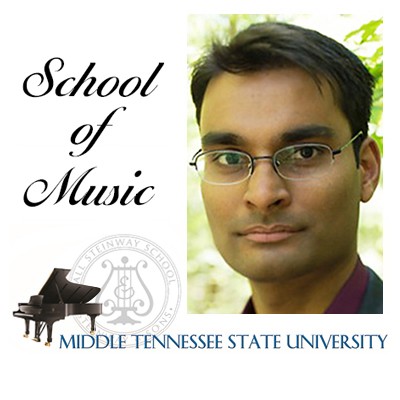 Nadgir’s 8 p.m. free public concert, the fourth in the series, will be conducted inside the Wright Building’s Hinton Music Hall.

The coordinator of keyboard studies for MTSU’s renowned School of Music will perform “Sonata in E major” by Joseph Haydn, “Kreisleriana” by Robert Schumann, “Rain Tree Sketch II“ by Toru Takemitsu and “Sonata No. 3 in F sharp minor” by Alexander Scriabin.

“The Haydn E major sonata is very charming and sweet,” Nadgir explained. “Although the second movement has a more inward character, the outer movements are very light and carefree.”

Calling the Schumann piece “one of the great monumental achievements of the Romantic period” and the Takemitsu composition “a hauntingly beautiful work,” the professor added that each movement of Scriabin’s sonata, which the musician titled “States of the Soul,” “provides a glimpse into the human spirit.”

Nadgir has performed as a solo pianist and chamber musician in the United States, South America, Europe and Asia, in venues that include the Weill Recital Hall at Carnegie Hall, and has participated in several international music events.

You can enjoy a preview of Nadgir’s Jan. 19 concert below. He performs Bach’s “Partita No. 3 in A minor, BWV 827: Fantasia, Allemande, Corrente” on the stage of Hinton Hall.