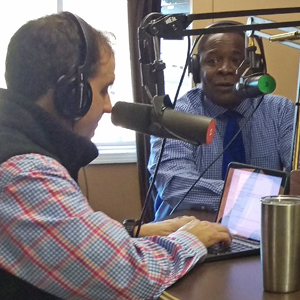 Hosted by veteran radio host Bart Walker, the program aired live Wednesday, Jan. 13, on FM 100.5 and 101.9 and AM 1450 from the WGNS studio in downtown Murfreesboro. If you missed it, you can listen to a podcast of the show here.

“We’re certainly very grateful and consider ourselves as a university very blessed to have such a partnership with the city,” McPhee said during the program.

Among topics discussed included the upcoming grand opening match between the MTSU men’s tennis team and Vanderbilt University at 2 p.m. Monday, Jan. 18, at the Adams Tennis Complex at Old Fort Park. Admission is free to the match, which will be played in the new $6.2 million indoor home of the Blue Raiders tennis teams.

The complex stems from a partnership between the City of Murfreesboro, MTSU and the nonprofit Christy-Houston Foundation.