The public and Middle Tennessee State University community are invited to the annual MTSU 9/11 Remembrance at 7:30 a.m. Wednesday, Sept. 11.

It will be at a new venue, the Miller Education Center atrium, 503 E. Bell St., this year because of on-campus construction near the Veterans Memorial adjacent to the Tom H. Jackson Building. Officials with the Charlie and Hazel Daniels Veterans and Military Family Center expect to return to the Veterans Memorial for the 9/11 Remembrance in 2020. 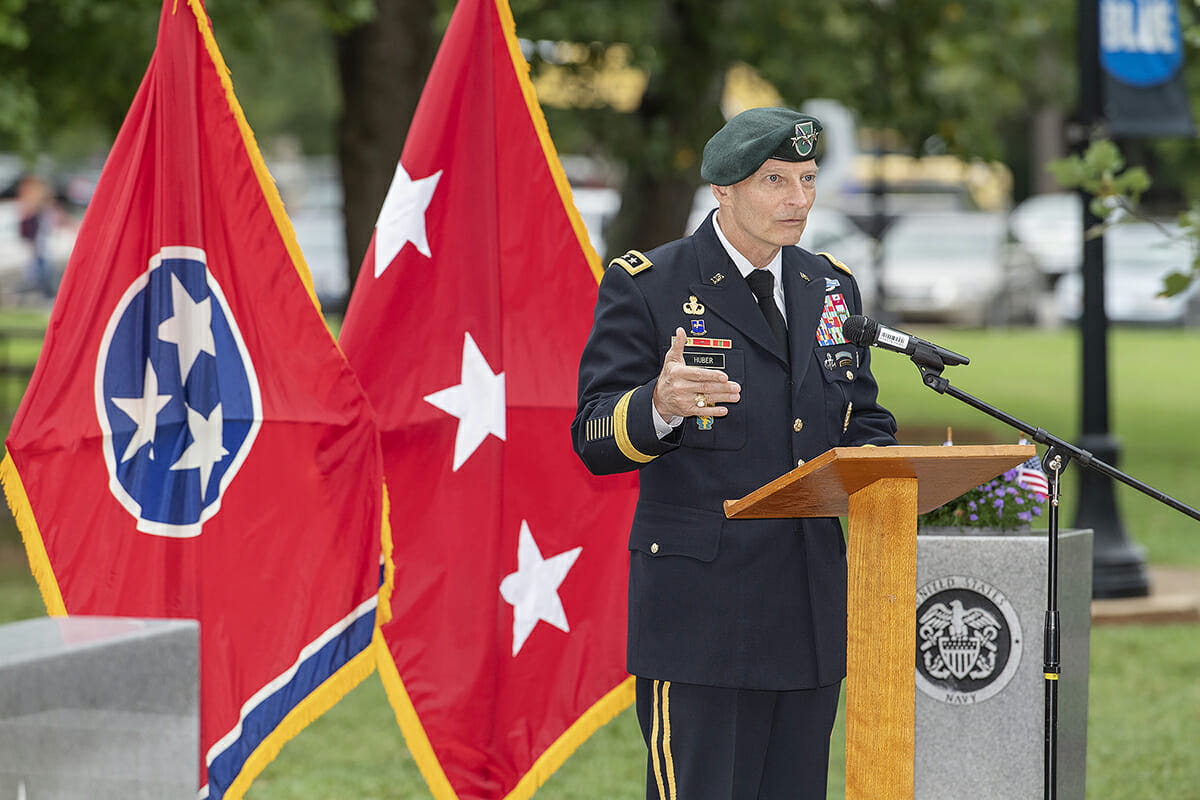 In this 2018 file photo, Keith M. Huber, retired U.S. Army lieutenant general and senior adviser for MTSU veterans and leadership initiatives, addresses the crowd at a 9/11 Remembrance ceremony. Because of campus construction, the event will move to the Miller Education Center atrium at 7:30 a.m. Wednesday, Sept. 11. (MTSU file photo by Andy Heidt)

The event commemorates the 17thanniversary of a series of four coordinated terrorist suicide attacks by the extremist group al-Qaida on U.S. landmarks, which occurred Sept. 11, 2001.

“We encourage people in the community to come,” said Hilary Miller, Daniels Center director. “We will have three great speakers, who have an impact at the local, state and national level.”

Keith M. Huber, senior adviser for veterans and leadership initiatives and a retired U.S. Army lieutenant general, will provide the welcome and introductions. Country music singer Rachel Lipsky will sing the National Anthem. A 9/11 memorial speech will be read by an MTSU ROTC cadet following a moment of silence.

Robert Aanerud will perform taps near the end of the ceremony.

The 9/11 Remembrance will be the start of a busy day for the Veterans Center.

Other events Wednesday will include:

• A 9/11 Tennessee Remembrance Walk with the American and ROTC flags led by Blue Raider American Veterans Organization, or BRAVO, from 9 to 11 a.m. in the heart of campus. It is part of a college organization-led drive across the state on Sept. 11.

“There are freshmen now who don’t know anything about 9/11,” said C.J. Ockletree, a master’s degree candidate in the College of Behavioral and Health Sciences and an Army veteran who works in the veterans center.

“I was in middle school and watched it (the events surrounding 9/11) in class and that’s why I joined the military. I lost family, an aunt at the Pentagon and an uncle at the twin towers in New York. It’s an education process for some students. They need to know what their country’s been through.”

To preregister, email Ockletree at cjo2m@mtmail.mtsu.edu. Walkers, runners and ruckers (participants wearing backpacks) also can register on the back side of the KUC facing Military Memorial.

• The “Battle of the Branches” American Red Cross blood drive from noon to 6 p.m. just outside the veterans center’s third-floor office, Room 322 in the Keathley University Center, 1524 Military Memorial Drive, in the heart of campus.